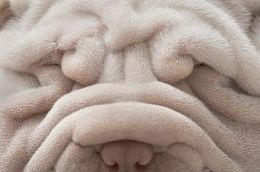 Does a dog know how it looks? It knows how another dog looks, certainly. It can tell friends from foes from strangers at a distance, aided greatly by smell. But does it place much importance on appearance? I know a smaller dog may back away from a larger one, but does that involve a mental weigh-in? I think it has more to do with the display of emotions, and I've seen big dogs back away in the face of small dogs in a

ferocious frenzy. Certainly enormous dogs and tiny ones exhibit a healthy mutual sexual curiosity, even if it sometimes seems a Great Dane might actually inhale a Chihuahua's netherlands.

Dogs seem to identity more with familiarity and attitude than appearance, I think. So they prefer their own breed over another? Aren't most dogs mixed-breed? Doesn't that indicate democracy, or perhaps promiscuity? In my imagination a dog looks resides inside itself and thinks, I am a dog. Then it encounters another animal and thinks, That is/isn't a dog, too. Seeing a dog that looks like itself, does a dog think, Hey, that dog looks just like me! Does it get into value judgments, like You have your mother's ears? 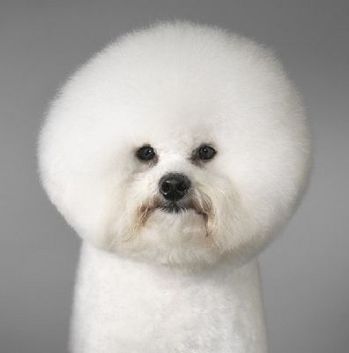 I suspect that dog doesn't think in those terms. Dogs are extraordinarily skilled in their sense of smell, and my dogs have had infinite patience in sniffing at the territorial markings of other dogs. When hey hear another dog barking, they start to bark. If one dog in a house barks at the door, any other dogs in the house will come barking and scrambling to the door: Five-alarm fire! But dogs don't ask themselves, Does she think she looks good with that blow-dry? or How can he see with hair over his eyes? or Poodles think they're so chic. Their minds just don't work that way.

The dogs illustrating this entry are from a remarkable photography exhibition by Tim Flach, at Osborne Samuel Ltd., in London. His book Dogs was published in October and is selling well. I came across the gallery's web page and did a post about it. That should have been that. But I couldn't get these dogs out of my mind. Only a couple of them looked "doggy." The others looked like the result of painstaking breeding and grooming. Dog show dogs. 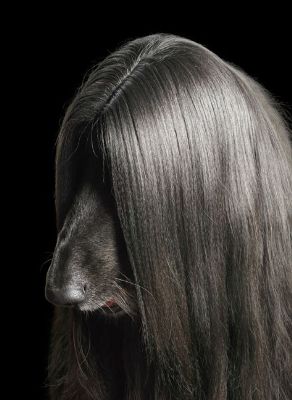 I suppose show dogs, like thorougbreds, enjoy the attention. No animal is more keyed to its master's praise and criticism than a dog. A horse knows it has won a race because it ran faster than the other horses. A dog knows it has won a show, because it senses it from its master. But does the dog know whyit won? It may assume it won because it was a very good doggie indeed. And it obediently walked and heeled and sat and posed as it had been trained. Does the dog think its grooming had anything to do with it? Dogs know they are groomed, but do they know why? Perhaps they read it as an elaborate form of being petted.

In appearance, then, these dogs are the result of (1) genetics, guided by breeding, and (2) pressures from their society. Nature and nurture. They have not been allowed to evolve in an unplanned way, and men have stepped in to exploit genetics. And their society consists of not the great dog diaspora, but the requirements of dog shows. They are trained, groomed, combed, trimmed, colored and even attired by their virtual society. And all the time, inside looking out, they are dogs, and would steal a lamb chop from the table if they thought they could get away with it. 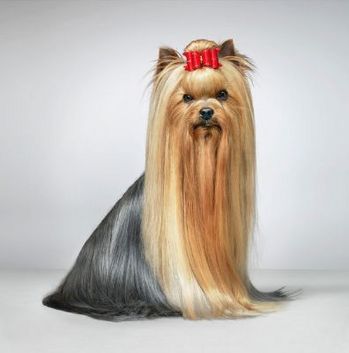 Such thoughts circled in my mind for a few days, and eventually drifted around to the matter of mankind. We, too, are products of nature and nurture, but unlike dogs we have a highly developed consciousness of self, and place great importance on how we look. We dress and groom ourselves, try to choose a body weight, have a large variety of facial expressions, and so on -- all devoted to our competition in the vast dog show known as human society. "When I walk down the street and look at people," Gene Siskel liked to say, "it occurs to me that when they left home this morning, most of them thought they looked great."

Standards in dog shows evolve over a period of time based on what previous winners have looked like and what each era of judges seems to be favoring. So it is in the Human Shows. We present ourselves to look successful, and hope the judges will approve. Of course much depends on our breed. If we are corporate executives, we know that previous winners have presented like Richard Fuld. If we are hip-artists, we emulate the previous generation of Grammy winners. If we are billionaires, we copy Bill Gates or Warren Buffet by showing ourselves above conformity in appearance. If we are young people on the make, we try to look hot. If we're nerds, we study Michael Cera. 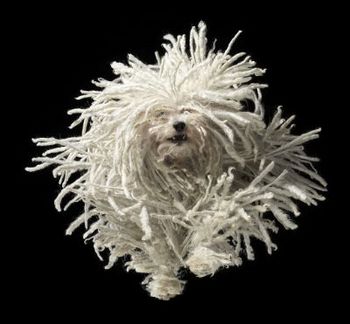 Some years ago I became aware that most young me were wearing their jeans very low on their bodies, with the legs too long and baggy on the bottom. Thus they shuffled through life with elephant feet. This was an evolutionary disadvantage in fight-or-flight, but useful to showing they belonged to the herd. When I was at the University of Cape Town, I noticed a great many of the men students wore shorts, hiking socks, and sturdy shoes or boots. This to go to class or on a date nowhere near the slopes of Table Mountains. Some Australian men I believe wear long pants as rarely as possible.

We look at others and think, One of/not one of us. Then we make a value judgement depending on who "us" is. Some people may look with distaste at a woman with body piercings, ripped jeans, a sudden belt, a streak of color in their hair and a good-sized tattoo in a visible place. Reflect that it took that person a good deal of time and trouble, not to say money, to leave the house looking like that this morning. She must believe there's a show to be won. In her breed or category, that's what the judges are looking for this year. Other people may look at a man whose job requires him to be dressed always in a certain way, like George Clooney in "Up in the Air," and think That poor asshole. There but for the grace of God go I.

Many of us are prejudiced on the basis of personal appearance. That counts, I think, much more than race. Better a person who looks well dressed than a street person, no matter what their two races. Unless, of course, we're a street person, and then we sense the fraternity and acceptance that goes with the Goodwill wardrobe.

Empathy is the attribute of civilization. Those without it judge on appearance. They assume everyone is entered in the same Human Show. But no matter how a person may look to you, his appearance is designed to compete well. Inside that person, looking out, is a human being. He has have been shaped, groomed and dressed according to the competition standards for his category and breed. Shakespeare understood this: 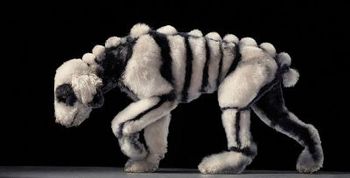 Those who understand that will see their fellow beings more clearly. They will be able to associate with them, work and live with them, understand them and even identify with them. Because no matter what they look like, they are like us in the rest. Of course there will always be a few who say it's all very well for Shylock, but after all I'm not a Jew.More photographs of dogs by Tim Flach can be seen at Osborne Samuel Ltd, . at 23a Bruton Street.