So you think you have seen "The Wizard of Oz" already? Most likely multiple times at various stages of your life.

When I heard that there would be a chance this month to see one of my cherished childhood movies on the big screen for the first time—uncut, remastered, in three-strip Technicolor and IMAX 3-D—it felt like Christmas, Halloween and my birthday were happening all at once. That I could revisit Dorothy and her friends as they take their event-filled journey to the Emerald City while defeating the Wicked Witch of the West with all the modern-day hocus pocus that movies can summon seemed like a gift indeed.

You see, long ago in the days before cable, VHS tapes and DVD's, we Boomer brats had to wait until the network overlords deigned to air "Oz" but once a year from 1959 to 1991, with ad breaks included. Back then, most families couldn't afford a color TV, which meant that only a few privileged youngsters understood the joke about the horse of a different color. For us, the beast was merely different shades of gray.

We might as well have been forced to trudge 20 miles to school in the snow and without shoes, such was our deprived existence.

But now we can make up for lost time and drag the kids and grandkids along—and maybe even borrow some neighbor children, too. Why should they be allowed to grow up never knowing how it feels like to be freaked out by flying monkeys? For one week only starting today, moviegoers of all ages—whether return visitors or first-timers to the Merry Old Land of Oz—will be able to gaze anew upon one of Hollywood's most enduring creations, one that has grown into a kind of shared cultural language that connects generation after generation.

Yes, it is bigger, given the format. And, yes, it is more immersive with the extra dimension (post-converted, of course). But what you might not expect is that even though you can practically recite almost every line by heart (my favorite: "Pay no attention to that man behind the curtain"), spiffing up the 1939 musical fantasy with 21st century wizardry has turned it into an experience reborn.

When the cyclone spins its ominous clouds of dirt and dust while a wind-battered Dorothy desperately tries to find shelter on the farm, this version makes it feel as if she is genuinely at risk. As an impatient child, I used to consider the sepia-toned Kansas prologue to be simply filler (save for Judy Garland's plaintive and gloriously unadorned rendition of Over the Rainbow, as moving as ever) until the Munchkins showed up. Not with this viewing. The somewhat crude effect (a large piece of muslin attached to a metal frame) feels more genuinely frightening in three dimensions than all that digital apocalyptic doom, gloom and boom that plagued most of the action movies this past summer. No wonder the more intense 3-D version of Oz has been upgraded to a PG rating from a G. 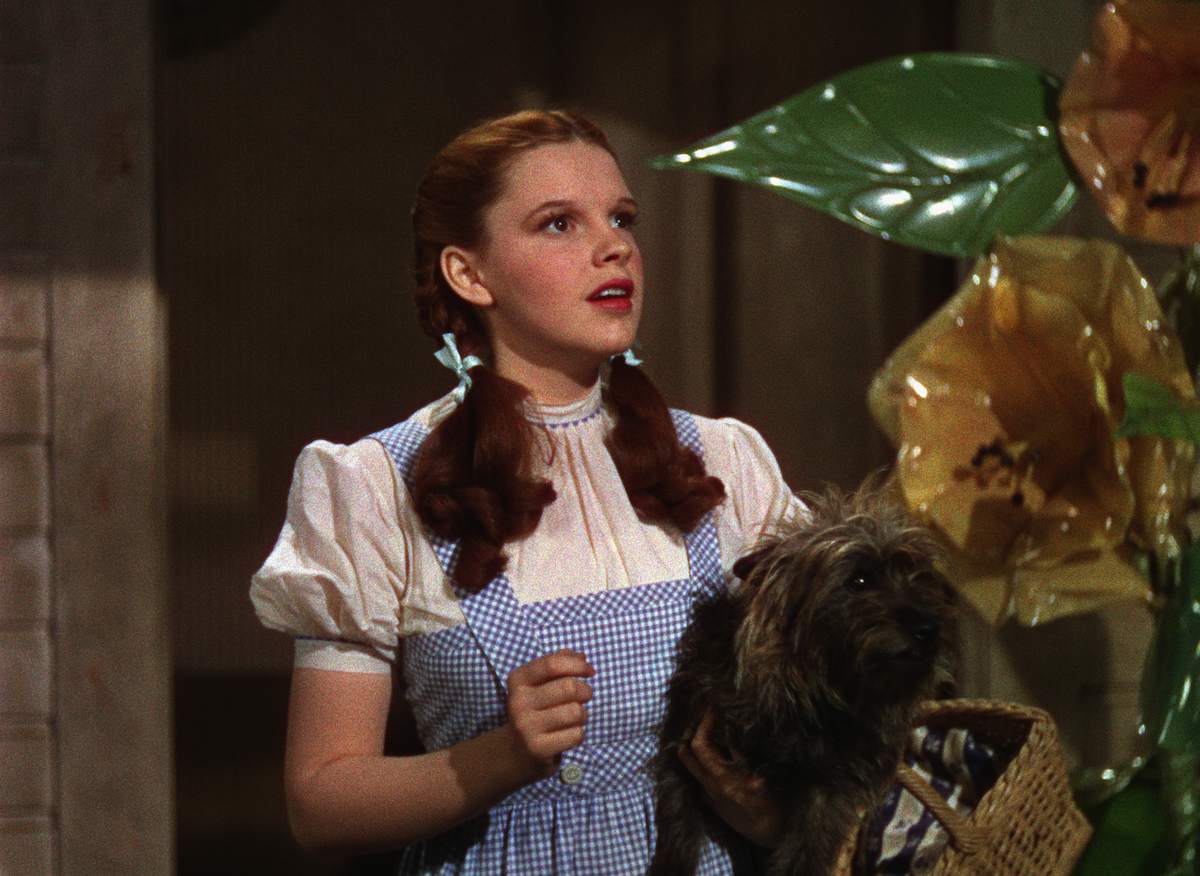 And guess who turns out to be quite the little fur-bearing scene stealer? Toto. Terry, the female Cairn terrier who played the role of Dorothy's loyal pet, often got lost in the confines of a small TV screen. But when projected in IMAX 3-D, the pooch's emoting prowess is hard to miss. Whether sitting enraptured and gently gesturing with a raised paw during Over the Rainbow, fearlessly escaping from Miss Gulch's bike basket or leading the Scarecrow, the Tin Man and the Cowardly Lion uphill to the Wicked Witch's castle so they can rescue Dorothy, Toto clearly possesses most of the brains, heart and courage on display in the film. He even prevents his owner from flying off in the hot-air balloon with the Wizard, clearly a pompous windbag who is ultimately not to be trusted.

Being older, I also caught some funny lines I never laughed at as a girl. Such as when the Scarecrow, after receiving his diploma from the Wizard, says, "How can I ever thank you enough?"

The Wizard matter-of-factly replies, "Well, you can't," before explaining about the Lion's valuable parting gift.

Not everything is hunky-dory when super-sized, however. The fact that most of the action onscreen takes place in front of painted backdrops on soundstages is more obvious than ever in this version. But what the scenery lacks for authenticity is more than made up for by the wonderful songs with their clever wordplay (especially during the Lion's If I Were King of the Forest), as well as the cast: vaudeville-trained pros Ray Bolger, Jack Haley and especially Bert Lahr; Garland at her youthful peak; those madcap Munchkins; and marvelous character actresses Billie Burke and Margaret Hamilton as the dueling witches.

There are those among us—such as my editor—who might consider such a re-release to be a crassly cynical attempt to cash in from having ticket buyers pay higher prices for showings. In most cases, I, too, like my movies the same way I prefer my water in restaurants: flat, please. But there are those rare occasions, such as last year's re-issue of "Titanic," when a movie begs to be retro-fitted with—and even benefits from—a stereoscopic treatment, the better to appeal to today's digitally savvy young viewers.

And if ever (if ever) there was a classic that deserves to return to theaters with all the modern trappings, it is "The Wizard of Oz." Considered the most-viewed film in history, it basically invented the fantasy quest film, and still defines it. Much like "Star Wars"—one of many titles that owes it a great debt—"Oz" harks back to myths of yore as it mingles a battle between good and evil with a touching coming-of-age tale.

There is one problem with seeing a beloved movie again when you are older and less open-minded. You realize that what you could easily accept as a child becomes more puzzling as an adult. For instance, why does Glinda the Good Witch make Dorothy and her friends go through all the trouble of finding the Wizard and tangling with the Wicked Witch if they all had what they were seeking to begin with? Her excuse about not explaining to Dorothy that the ruby slippers had the magic to transport her back to Kansas is pretty lame. As she tells the Scarecrow, "Because she wouldn't have believed me. She had to learn it for herself." As a child, I was more willing to explain the inconsistencies away as dream logic than my more literal-minded self is now.

And why does Dorothy tell the Scarecrow as she says goodbye, "I think I'll miss you most of all?" She seemed just as chummy with the Tin Man and the Lion. It's an answer as elusive as trying to figure out what Bill Murray whispers in Scarlett Johansson's ear at the end of "Lost in Translation."

And, of course, ending the movie by suggesting there is no place like home after we just joined Dorothy and her friends on this amazing journey is just silly. Besides, if you never left your house, you would never get to experience this revival of “The Wizard of Oz” as it was meant to be seen: larger than life and in the company of others.

Next Article: Thumbnails 9/20/2013 Previous Article: Stephen Merchant Wants to Buy You a Drink on "Hello Ladies"