The Ebert Club invites you to enjoy "The Kennel Murder Case" (1933) streaming free. And please join the Club to explore an eclectic assortment of discoveries. Your subscription helps support the Newsletter, the Far-Flung Correspondents and the On-Demanders on my site. - Roger Ebert 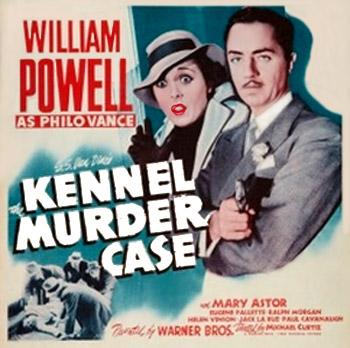 The Kennel Murder Case (1933) Directed by Michael Curtiz. Screenplay by Robert N. Lee, Robert Presnell Sr. and Peter Milne. Based on the novel "The Kennel Murder Case" by S.S. Van Dine. Starring William Powell, Mary Astor, Eugene Pallette, Ralph Morgan, Robert McWade, Robert Barrat, Frank Conroy, Etienne Girardot, James Lee, Paul Cavanagh, Arthur Hohl and Helen Vinson.Synopsis: "Archer Coe has been found dead in his locked bedroom. The cops consider it suicide, but Philo believes otherwise. When the Coroner shows up, he finds that Archer had been hit with a blunt object, stabbed and shot - making suicide unlikely. When the evidence points to his brother, Brisbane is found stabbed to death in the closet. Archer had a number of enemies, any one of which would have been glad to knock him off, but which one did and how did the murder occur in a room looked from the inside. Only one man, the keen, fascinating, debonair detective Philo Vance, would be able to figure out who is the killer..."Note: Film historians such as William K. Everson, who pronounced The Kennel Murder Case a "masterpiece" (in the August 1984 issue of Films in Review) consider it one of the greatest screen adaptations of a Golden Age mystery novel; ranking it with the 1946 film Green for Danger. - Wikipedia