Confident Return for Hysterical What We Do in the Shadows

The second season of FX’s “What We Do in the Shadows,” based on the Jemaine Clement & Taika Waititi film of the same name, was one of the biggest TV hits of 2020, even landing a surprising (but totally deserved) Emmy nomination for Best Comedy Series. It’s a show that more people seem to be finding every day, and FX is confident enough in its long-term success that they’ve already renewed it for a fourth season in advance of the premiere of the third, this Thursday, September 2nd. After too long away from the bloodsuckers of Staten Island, it’s comforting to report that the program is as funny as ever, even reflecting some uncertainty about where to go and what to do next in its narrative. Being insecure sucks during a lifetime—imagine it for an eternity.

At the end of season two, the heroes of “What We Do in the Shadows” were saved by Guillermo De la Cruz (Harvey Guillén), the familiar to the lovably idiotic Nandor (Kayvan Novak) and a lackey who has dreamed of being made a creature of the night for years, only recently learning that he is a descendant of the legendary vampire hunter Van Helsing. The last season ended with Guillermo killing a whole bunch of vamps to protect his BFFs.

In the season premiere, Nandor, Laszlo (Matt Berry), Nadja (Natasia Demetriou), and Colin (Mark Proksch) struggle with what to do now with Guillermo. He may have saved their lives but he’s also a pretty skilled vampire killer, so it’s kind of their eternal duty to destroy him (which conflicts with their eternal duty to serve him because of the whole life-saving thing ... it’s not easy). With some very funny cameos, the premiere leans into a “what now” sense after the chaos of the end of last year, while also revealing how much Guillermo has been keeping them alive for years. To say they need him would be an understatement. 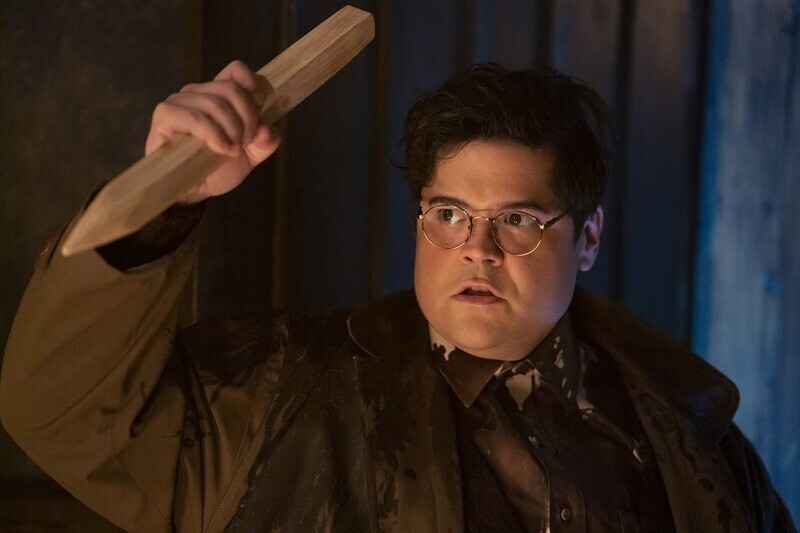 The next three episodes sent for press push forward the Guillermo Van Helsing arc a bit in ways I wouldn’t spoil while also providing very funny one-off comedy set-ups. In “The Cloak of Duplication,” they find a cape that allows them to shape shift and use it to help Nandor woo the receptionist at his 24-hour fitness club. Watching Novak take on the physicality of “Colin as Nandor” or “Laszlo as Nandor” reminds one what a great comic actor he can be. Matt Berry got a lot of the acting attention for season two (in large part because of the genius of “Jackie Daytona”) but the opening quartet reminds one that this is ensemble piece without a weakness. It almost feels like the writers cracked this season with that in mind, making sure all five of the regular leads are balanced, and they all seem even more confident in these characters than they did in the first two seasons. It’s one of the best comedy ensembles on television.

The writing on “What We Do in the Shadows” remains some of the sharpest on television, balancing physical humor with hysterical plot twists. The jokes are never easy or predictable, and the humor emerges from a finely-tuned balance of unpredictable narrative turns and how much we know these characters after 20 episodes. Whether it’s Colin’s bizarre enjoyment of monitoring Guillermo’s scat for messages while he’s in captivity or Nandor’s extreme romantic side with his girlfriend Gail (Aida Turturro) in the third episode, the humor feels both in line with what we expect from this quintet and yet impossible to see coming at the same time. It’s fresh and yet consistent, which is common in the best comedies—we laugh because the jokes fit the characters and yet we still can’t see the punchlines coming.

“What We Do in the Shadows” shouldn’t be this funny. TV adaptations of film comedies usually exist as echoes of their superior film versions, but the legacy of these characters has surpassed the film. Watching the third season, I thought to myself how long FX has kept “It’s Always Sunny in Philadelphia” on the air (it just started filming its 15th season). Let’s hope they have the same plans for “What We Do in the Shadows.”