Poland-born director Walerian Borowczyk’s cinema is neither decorative not decorous. In both his animated and live-action films, he favors plainly-composed head-on shots, mostly medium in length. His lighting is generally flat. Although he concocts startling images, he very rarely makes pretty ones. Even in a film set in 13th-century France, he favors cinema language that is almost pedestrian. And yet every one of his films—his career extended from the mid-‘40s until the early ‘90s, and he died in 2006—startle in some way. 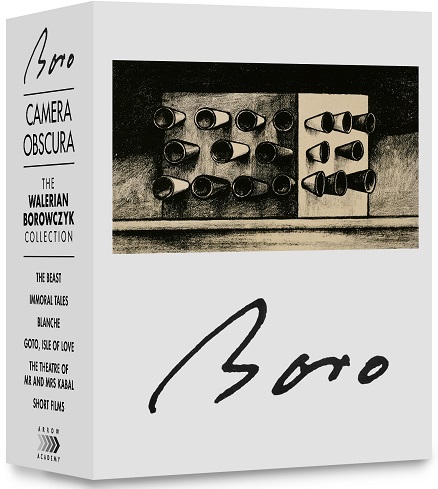 Arrow, the exceptionally adventurous video label from England, shows both considerable skill and considerable daring in its limited edition “Boro Box,” a dual-format, multi-disc set that collects five of Borowczyk’s features and 15 of his shorts (both animated and live-action) and also includes an exhaustive book of biography and criticism, which, turned over, reveals another book of the filmmaker’s short stories and drawings. It’s a head-spinning crash course in the works of a filmmaker who’s not easy to like—he’s not nearly as intellectually adroit or witty as, say Luis Buñuel, to name a cinematic provocateur who was a major influence on Borowczyk—but whose ability to appall and exhilarate and to make one fall sideways laughing at erotic absurdity will certainly find appreciation from anyone whose taste for the Psychotronic runs to extremes.

Margolit Fox, in her 2006 New York Times obituary, wrote of Borowczyk that he was “described variously by critics as a genius, a pornographer and a genius who also happened to be a pornographer.” The problem with this assessment is that even at its most sexually explicit, and be warned, the work could get very sexually explicit indeed, Borowczyk never betrays a desire to arouse. His most notorious film, 1975’s “The Beast,” included in this set, opens with a scene of unsimulated horse-mating, and ends with a dream sequence in which a maiden is ravished, in a variety of ways and positions, by a man-beast with a massive and rather silly-looking tool of reproduction that keeps spouting…well, you get the idea. I can’t imagine a human being finding such stuff genuinely stimulating in the way that pornography itself actually has to intend in order for it to be pornography (and no jokes about Comic-Con attendees and their predilections, please). So if Borowczyk’s not a pornographer, what is he?

The keys are found in the early work collected in the Arrow box. I won’t lie: my favorite is very first, the “Short Films And Animation,” which contains a beautiful rendering of the 1958 short “Astronauts,” a picture he made with the legendary Chris Marker soon after relocating to France. Like the films of Czech director Karel Zeman, Borowczyk’s animated work provides the delightful missing links between Melies and Terry Gilliam; “Astronauts” is a work of whimsical subversion and freedom. Boro’s 1963 destroyed-room-reversal-and-loop 1963 masterpiece “Renaissance” anticipates The Quay Brothers while indulging a fantastic anarchical streak, something pushed to full throttle in his 1967 animation/live-action hybrid “Theater of Mr. and Mrs. Kabal.” David Thomson, a critic who is nothing if not discriminating, pronounced Borowczyk “one of the major artists of modern cinema” strictly on the strength of these works. He’s not wrong. Power relations, both political and sexual, are the subjects of his two live-action features collected here, 1968’s grim and grimly funny totalitarian allegory “Goto: Isle Of Love” and the 13th-Century tale of amorous machinations in a French court, 1971’s “Blanche.”

It gets tougher, though, to suss out what Boro is on about as the work gets more explicit. Various accounts of the filmmaker find him, in a fashion not unreminiscent of the career travails of rough-hewn erotic fantasist Jean Rollin, making a kind of Faustian bargain with sex-content hungry European film producers in an effort to realize a vision. But as out there as the content of “Immoral Tales” gets (Paloma Picasso’s Elizabeth De Bathory really does take a rejuvenating bath in the blood of slaughtered maidens, and a comely Borgia has sex with an uncle, who happens to be the gosh-darn Pope), there’s something about its cinematic detachment that makes me either uncomfortable or indifferent, I can’t say which. As for “The Beast.” Well, as I mentioned before, it opens with an explicit scene of horses mating. To which I say, “ew,” but after saying that, I think, why I should be mortified, let alone be mortified by the prospect of potential mortification on the part of you, the reader, when, after all, a much-respected film like Bertolucci’s “1900” opens its second half with unsimulated footage of a live pig’s transformation into sausage, and few critics or viewers go to the fainting couch over that? This is a distinction worth thinking about, so why do I resent “The Beast” for compelling me to think about it? Borowczyk’s key strength as a filmmaker could be his desire to show us things we don’t want to see, and to show them in the plainest light. The perversions on display in “The Beast” have a laughable dimension to them, but its evocation of a sexuality whose exhaustion brings death speaks to some of civilization’s most enduring hang-ups.

This is hardly the only question brought up by the material in this incredible set, which features nothing but beautifully rendered transfers, terrifically stimulating and exhaustive extras, and superb critical texts. As much as some of the stuff here irritates and frustrates me, it’s made me even more curious than I once was about the rest of Borowczyk’s work. I’m pleased, then, to learn that Arrow’s not through with its exploration of the filmmaker yet, and will release his 1982 “Docteur Jekyll et les femmes” in 2015.