The Shifting Grounds of Human Behavior: A&E's "War and Peace"

A&E was once the go-to commercial cable network for sexy-classy miniseries adapted from the works of Jane Austen, Thomas Hardy, and the Brontës. But it’s been a decade or more since the network aired such successful adaptations. "Pride and Prejudice" (1995), the version with Colin Firth as a shirtless, swimming Mr. Darcy, set a new standard (ratings and budget) that PBS, HBO and other pay outlets routinely surpass. Now A&E, again in partnership with the BBC as it was in the late 1990s, storms back with an expensive, four-part and six-hour film of Leo Tolstoy's 1862 novel. Filmed in Russia, Latvia, Lithuania and featuring a truly international cast, "War and Peace" is a remarkably lavish affair.

What’s surprising isn’t just how good this "War and Peace" is—for A&E, the miniseries is a stirring return to form—but how resonant Tolstoy’s themes are today. A tale of love and coming-of-age under threat of total, apocalyptic war, the novel has a reputation of being difficult and morose. It is long: 1,400 pages. Those unfamiliar with Russian classics need know only that "War and Peace" is the one with Napoleon (the Big Bad) and Natasha (the girl everyone loves).

Director Tom Harper ("Peaky Blinders") has never made anything on this scale, but then, neither has anyone else, unless they’ve made a previous version of "War and Peace." Or if they’re Napoleon, waging the Napoleonic wars. A Russian film adaptation from 1966 is said to be the best, and Anthony Hopkins, in 1972, was a charmingly diffident leading man for the BBC version.

Though a Russian film adaptation from 1966 is said to be superior, with a cast of thousands, this new version has a cast of (virtual) tens of thousands—all of whom seem to be realistically present on the battlefield. Harper has an impressive handle in these battle sequences, epic clashes between Napoleon’s forces and the Russian Army at Austerlitz and Borodino. With a sweeping overhead shot of a dispatch rider galloping from one end of the Russian line to the cavalry, hidden in the treeline, Harper gives a sense of both the vastness of the battle, and the many smaller dramas about to take place within the chaos.

More masterly, though, is the way the miniseries captures the story’s complicated social hierarchy, where political favors exist. Take the first episode’s dizzying opening scene, set at a St. Petersburg soiree, which introduces nearly all the major characters within four and a half minutes. The party, presided over by society hostess Anna (Gillian Anderson, wry) and a political fixer (Stephen Rea, sly) attracts the city’s elite, and one awkward newcomer: Pierre (Paul Dano), the “natural” or illegitimate son of an elderly unmarried nobleman. As the story begins, Pierre’s a bookish idealist, complete with nerd glasses. Pierre’s a fan of liberte, egalite, fraternite, and Napoleon, though it’s not clear if he knows that Napoleon has declared himself Emperor, with a plan to rule Europe. Dano overplays Pierre’s hayseed manners and schoolmaster squint, early on, but with sheer sincerity becomes an endearing hero.

Pierre’s unlikely best friend, Prince Andrei (James Norton), has grand ambitions and a death wish. Married and expecting a child, Andrei longs for glory in battle. After Andrei returns from war, a widower, a changed man who regrets his treatment of his late wife, Norton plays him as a Byronic brooder, alluring but cold around the heart.

When Pierre’s father dies, the naïve bumbler unexpectedly inherits both title and estate. (Those who fear that Tolstoy is non-stop gloom: wait for the post-deathbed scene, in which Pierre’s estranged relatives grapple, almost to the carpet, over the old man’s will.) 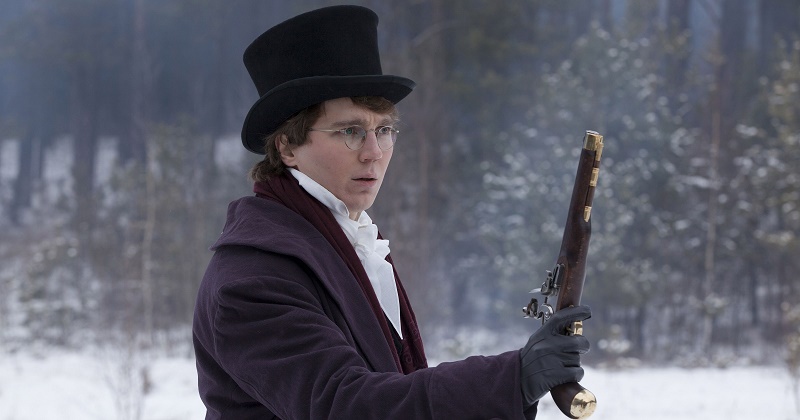 Both young men’s lives become entwined with the Rostov family, including siblings Nikolai (Jack Lowden), a cavalry officer with a penchant for gambling, and Natasha (Lily James), a soulful, musically-inclined teenager. 13 years old when the story begins, Natasha’s given to childish remarks (“How handsome they look in their uniforms!”), though she later distinguishes herself with brave and selfless acts as Moscow burns.

Like her brother, good-girl Natasha shows signs of impulsiveness. Fond of dancing and music, Natasha, on a holiday to a rural village, hears a violinist play an old folk tune. She dances wildly, as if possessed. (“How does she know what to do?” her cousin asks. “It’s in her blood,” comes the answer.) Her darkly passionate dance, spookily lit and shot with a handheld camera, presages disaster to come, when, during Andrei’s long absence, Natasha will be tempted by the creepily unworthy Anatole (“I feel like his slave,” she says. “I want to ruin myself.”) Credit James ("Downton Abbey," "Cinderella") for making Natasha less of an idealized woman and more of a perplexing, self-contradictory and troubled human being.

Davies, who adapted "Pride and Prejudice" (1995), is renowned for uncovering the sex scenes that the original authors forgot to include. Tolstoy is racier than Jane Austen, so complainers (there were some among UK viewers) should not blame Davies for expounding upon the strongly implied exploits of Pierre’s vamp of a wife, Helene (Tuppence Middleton), who sleeps with everyone but her husband—including, maybe, her own brother, sleazy Anatole (Callum Turner). Clueless Pierre is the butt of rude jokes, including a “Lucky Pierre” gag. (OK, blame Andrew Davies for that one. The old devil.)

Even at six hours, this "War and Peace" moves fast. Still, much from the novel is omitted or elided. And it has to be, if it cannot be conveyed as drama. Yet even amid the tumult of war, the film pauses to allow characters to reflect, to regret, to change what they were thinking a moment ago, as when Andrei, who argues bitterly with his aged father (Jim Broadbent) as he departs for the Battle of Borodino, returns to his family estate when his regiment happens to pass nearby. Hoping to warn his father of the approaching enemy, he finds the place deserted.

Like a thief, Andrei peers through darkened, locked windows. Nothing’s said, and nothing really happens in this scene. But everything does, because Andrei realizes that he’s already seen his father for the last time. One of the pleasures of reading Tolstoy, wrote critic Michael Wood, is “his extraordinary sense of the shifting grounds of human behavior.” How wonderful to see that conveyed, in the middle of an epic, all without a word.