The Politics of Murdered (and Murderous) Women, Part 2: Walerian Borowczyk’s “The Strange Case of Dr. Jekyll And Miss Osbourne”

Last fall I reviewed a really unusual and beautiful box set of films by the Polish-born director Walerian Borowczyk for this website. Now Arrow, the company behind that set, has released what may be Borowczyk’s most visionary and accomplished live-action feature, 1981’s “The Strange Case Of Dr. Jekyll And Miss Osbourne.“ The multi-Euro-co-production features a continent spanning cast, including young German Udo Kier as Jekyll, Italian Marina Pierro as Fanny Osbourne, his betrothed, Irishman Patrick Magee as an extremely agitated military man, Swiss exploitation stalwart Howard Vernon, etc.

Borowczyk’s variant on Robert Louis Stevenson’s macabre tale of man’s dual nature compresses the storyline into one weird night: an evening at which Dr. Henry Jekyll hosts a dinner party announcing his engagement to the beautiful and demure Fanny Osbourne. The festivities are rife with disturbances, however, including the violent sexual murder of one of the evening’s entertainers. Additionally, Henry keeps dashing off to another part of the house. Before disappearing, Henry informs his doctor of some changes he’d like put in his will (Fanny overhears this exchanges), mentioning a heretofore unheard of “Mr. Hyde.” Once Henry absents himself, the party is crashed by a wild-eyed, homicidal debaucher who, among other things, ties down Magee’s general and makes him watch as the general’s daughter enthusiastically submits herself to all manner of verging-on-hardcore sexual humiliations from the bounder. 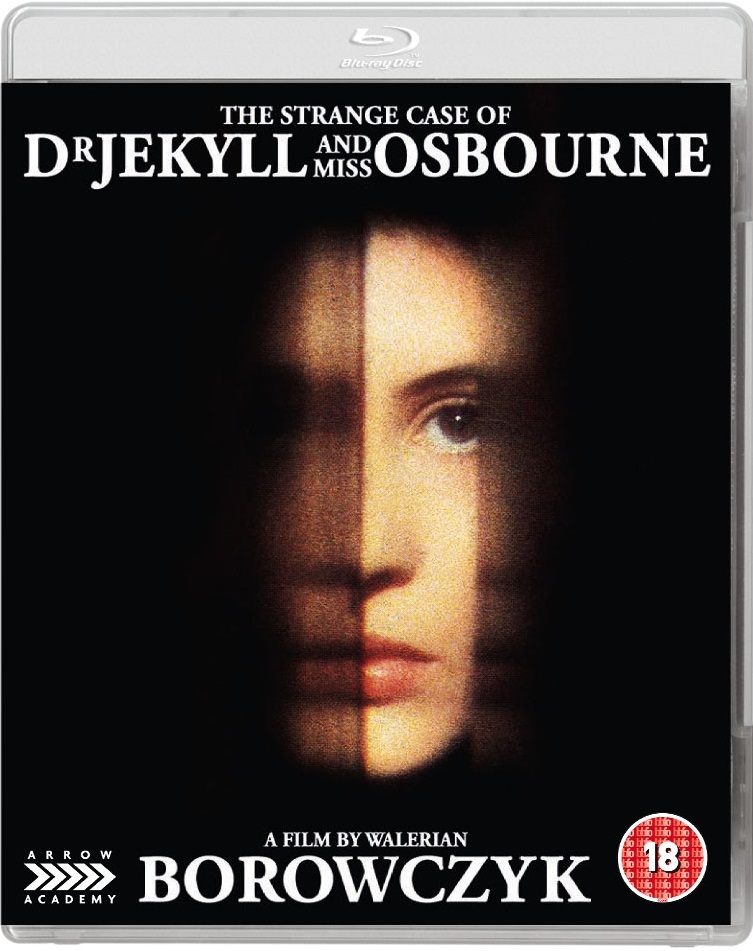 So far, so phallocentric, you might say. But Borowczyk has an admirably perverse sting for the movie’s tale. Everyone knows that Jekyll and Hyde are two manifestations of the same man, but Borowczyk declines to give Kier the actor’s workout the usually dual role demands, and instead has another actor, of largely different physical type, play Hyde. Gérard Zalcberg is truly feral in his wide-eyed, fang-bearing depredations. He is an eroticized manifestation of antisocial nihilism. In this film he comes to life not through a potion that Jekyll drinks, but rather through a chemical bath in which he thrashes. And Jekyll goes to the bath over an over, and eventually Fanny finds him engaging in the transformative cleansing. And the ripe-lipped, wide-eyed fiancée does not turn away in horror. Rather, she insists on joining him.

Here the movie turns genuinely subversive. Shot throughout with diffused light that gives the whole thing a feverish, half-remembered quality, the movie builds inexorably to a (to lift a phrase from Ed Wood) nightmare of ecstasy, a truly Sadean paroxysm. The film indulges a subversive impulse that’s genuinely in the realm of the capital-S Surreal. I was reminded of Luis Buñuel and Salvador Dali’s 1930 mini-feature “L’age d’Or,” whose focus was on a couple in the most extreme stages of mutual “amour fou”—the viewer first sees them trying to have sex in a mud puddle—who are constantly separated and thwarted by societal pressures. “What joy to have murdered our children” goes a rapturous voice-over in a garden scene just as the couple is about to be reunited in eye-rolling erotic squalor. Borowczyk’s film is like the Buñuel and Dali vision suddenly awarded a “happy” ending. Fanny does not physically transform in Jekyll’s chemical bath, but as the Rolling Stones put it, the change has come. But rather than operate under the oppressive weight of Hyde’s appendage, Fanny becomes an equal partner. Bounding a carriage to who-knows-where at the end, the now fully-compatible couple draws each others’ blood.

The movie’s scarily anarchic tenet is not one that’s exportable in any post-viewing context, unless you’re keen to land in jail. But in a movie watching time when any cinematic object offering a bromide of “empowerment” is praised as “subversive,” it’s refreshing to see a movie that genuinely yearns for the overturning of the social order, no matter how impractical. Borowczyk’s vision of sexual freedom as a potentially irresistible force makes for a powerfully disturbing and admirably direct 90 minute cinema experience. The Arrow package presents the film in a really beautiful representation, and the supplements are also first-rate. Exploitation at its most genuinely radical is up for grabs here.