After enduring the most insultingly laughable Black History Month speech in our nation’s history, many Americans will find writer/producer Jody Schiliro’s Smithsonian Channel production, “The Obama Years: The Power of Words,” to be a welcome, if bittersweet, antidote. The hour-long documentary reminds us of a time in the not-too-distant past when our country had a president who spoke eloquently, empathetically and in complete sentences. Barack Obama’s speeches had the structure of great literature, utilizing his own life as a prism with which to view America itself. He was a president in the classical mold of Abraham Lincoln, preaching a message of unity that was often chopped up into divisive soundbites by the time it reached viewers at home. No wonder his favored successor was beaten by a man who speaks primarily in vulgar tweets.

The film screened last night at Chicago’s Studio Xfinity as part of a 13-city tour launched prior to its television premiere slated for Monday, February 27th. Though it occasionally verges toward devolving into a hagiography, the program ultimately succeeds as a portrayal of not only the power that words can possess, but also the limitations of that power. It’s telling that three of the six pivotal speeches highlighted here took place prior to Obama’s two terms in office, beginning with his keynote address at the 2004 Democratic National Convention, which I still cite as the greatest political speech of my lifetime. Never have I seen a politician dominate the national consciousness so swiftly, stealing the limelight from his own party’s nominee, even despite having that nominee, John Kerry, insist on stealing one of his best lines (“I see us as one America—red, white and blue”). Yet that excision didn’t hinder Obama’s speech at all, since it was his variation on the line that everyone remembers (“We are not a liberal America or a conservative America, we are the United States of America”).

As one of the program’s numerous talking heads, Obama’s Chief Strategist, David Axelrod, claims that this speech “redefined patriotism” by illuminating the ideals that define an American, regardless of their background. When Obama’s chance at winning the presidency was threatened four years later by the fiery words of his reverend, Jeremiah Wright, which were broadcast repeatedly out of context, the candidate succeeded again by delivering an equally personal speech. He confessed that he couldn’t disown Wright any more than he could disown his white grandmother, a woman who voiced her fear of black men. “They are a part of me and they are a part of America,” declared Obama, effectively regaining the public’s support with his arresting honesty.

The third speech selected for the program, written for Obama’s appearance at the 2008 DNC, whereupon he accepted the party’s nomination, was clearly chosen more for its historical value than any particular line. An overhead shot of the enormous crowds that turned out for Obama’s inauguration elicited knowing laughter from the Chicago audience, in light of press secretary Sean Spicer’s recent, absurd claims that the diminished crowds at President Donald Trump’s inauguration were the “biggest ever. Period!” The program then abruptly cuts to the worst day of Obama’s presidency, when 20 first-graders were killed by a gunman at their elementary school in Newtown, Connecticut. Many audience members in attendance teared up at footage of Obama growing emotional during a speech in the briefing room, discussing the tragedy not as a president but as a parent. He took that same tone while addressing the victims’ families in Newtown, describing how a parent “has their heart outside of their body” at all times, and that a nation’s first duty should be to protect their children.

The film’s most crucial insight comes courtesy of Pulitzer Prize-winning historian Doris Kearns Goodwin, who notes how “the Bully Pulpit,” the phrase coined by President Theodore Roosevelt in reference to the White House as an advocacy platform, has much less power today, as illustrated by Congress’ refusal to embrace Obama’s call for new gun laws. It’s rather sad to watch the president joking about further failures, such as the incompetence of HealthCare.gov, at a White House Correspondents dinner, the very sight of which evokes queasy memories of Obama’s ill-conceived jokes about deadly drones. Thankfully, the film soon shifts to 2015, where Obama commemorated the 50th anniversary of the “Bloody Sunday” march in Selma, Alabama, a peaceful protest emblematic of all that have occurred and will continue under the new administration. The program then concludes with Obama’s stirring speech delivered in response to yet another senseless shooting, this one at an African Methodist Episcopal Church in Charleston, South Carolina. His order to remove the Confederate flag, “a reminder of systemic oppression,” was praised as a turning point and a moment of healing. How quickly all of that can evaporate. 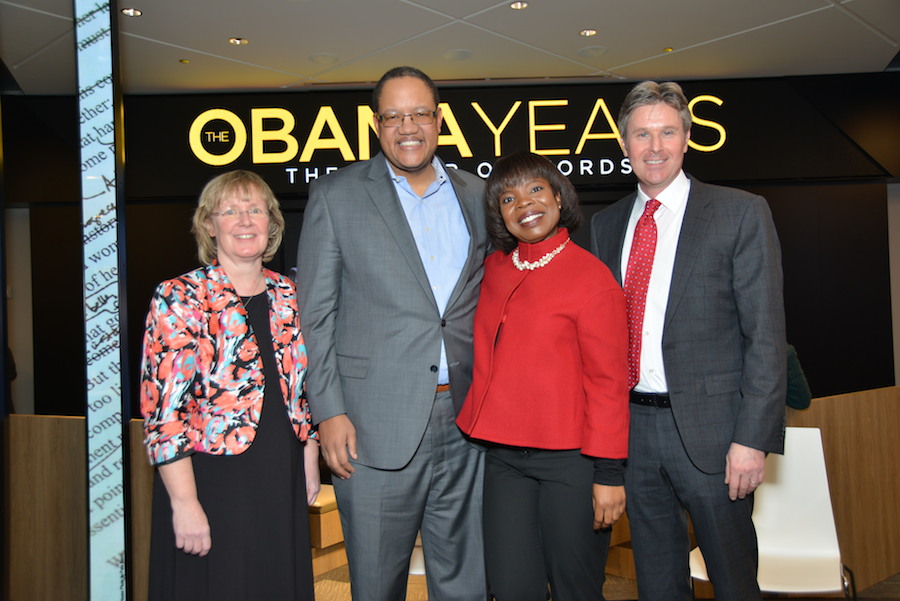 Following the screening was a Q&A moderated by Charles Poe, Senior Vice President of Production at the Smithsonian Channel, who asked his three panelists which of Obama’s speeches were among their most cherished. Comcast’s Government Affairs Manager, Kaleshia Page, cited the moment in 2012 when Obama said, “If I had a son, he’d look like Trayvon,” another example of his ability to be a father figure. Claire Jerry, Ph.D., a curator at the National Museum of American History, remembered the president’s speech in Cairo where he addressed U.S. foreign policy in the Middle East, his description of a just war policy in his Nobel Peace Prize speech, and his oft-quoted line, “We can disagree without being disagreeable.” As for Michael Strautmanis, Vice President of Civic Engagement at The Barack Obama Foundation, his two fondest memories of the “communal experience” at an Obama speech occurred at Hyde Park High School, where the president first mentioned what became the “My Brother’s Keeper” program, and the speech where he announced the end of “Don’t Ask, Don’t Tell.” Strautmanis recalled how emotional it was for him to see people in the audience “who felt like they had to hide who they were to serve their country,” and their reaction to having “their president acknowledge them.”

As soon as the moderator opened up the discussion to audience questions, the upbeat nature of the event changed entirely, as members of the public voiced their frustrations at the current political climate, as well as the impermanence of Obama’s efforts currently being dismantled by Trump. “What is his legacy outside of his words?” one man asked, and none of the panelists were able to form a solid answer, apart from plugging their respective sites and championing the importance of civic engagement. What no one seemed willing to admit was the fact that Obama endorsed the wrong candidate last year, ordering Bernie Sanders to yield to Hillary Clinton, just as he was told to yield to Clinton in 2008, even though he, like Sanders, had the grassroots momentum. Though Obama could become one of the great ex-presidents a la Jimmy Carter, getting more accomplished as a citizen than he ever could in office, his presidency feels, especially in present hindsight, like a missed opportunity. To Strautmanis’ credit, he did provide an answer later in the evening that got at the core of Obama’s strengths and weaknesses.

“He’s a listener,” said Strautmanis. “One of the reasons why his stories are so evocative is because he is touching on some very common human experiences, and that can only come from really engaging with people and listening to people. We’re talking a lot about where we are right now in this moment. Even the president has said that one of his regrets leaving the White House is that the rancor and the division that he wanted to change when he came to Washington has, in some ways, gotten worse. But in response to him, I always say that if you reach your hand out to somebody, you can only move forward if that person reaches back at you. I think that continual effort to reach out and to listen gave him an incredible amount of authenticity and power.”

Alas, as proven by this documentary, that power can only take you so far.

“The Obama Years: The Power of Words” premieres at 7pm CST Monday, February 27th on the Smithsonian Channel. For more information, visit its official site.