HBO Takes Viewers Back to 42nd Street with "The Deuce"

Premiering this Sunday night on HBO, season one of “The Deuce” is an epic series that’s essentially about a group of small business owners trying to make their way in the seediest parts of New York City in the 1970s. It’s a show that covers the era and aura from many point-of-views: the pimps, prostitutes, dirty cops, pornographers and even bar owners, aiming to create an entire television universe in one show. Roughly a thousand characters are focused on in the process of this bloated enterprise, as David Simon and George Pelecanos (famously of "The Wire") take us back to 42nd Street (nicknamed "The Deuce") when it was filled with the ugly business of cheap pleasure. But “The Deuce” can’t hold all of its many pieces together, despite the pockets of strong writing and performances, making viewers bounce around a visceral world with just not enough emotional gravity.

Let’s start with the two James Francos in the show: James Franco plays one brother named Vincent, who is trying to do good working late nights at a bar and also helping run a Korean restaurant. Over the course of a few episodes, along with his troublesome brother Frankie (also James Franco) and their brother-in-law Bobby (Chris Bauer), Vincent becomes a bit of a reluctant entrepreneur. He soon finds himself under the wing of a mafioso named Rudy Pipilo (Michael Rispoli), who sets him up with a new bar to take over that is named The Hi Hat, and another very progressive new business down the line. His character doesn’t have much of an arc despite starting out with that promise in early moments with his wife (Zoe Kazan, sharing a couple hammy scenes with Franco) emasculating him in so many ways. Instead he becomes a type of mothership for all of the different storylines this show contains. The idea of an actor playing two characters doesn’t add too much to the whole proceedings, and both performances are fine. It becomes another Nicolas Cage-esque, weird Franco kitsch that makes for numerous goofy shots featuring the two of them—definitive of the effort within "The Deuce" for detail, while also revealing of how such effort receives limited results.

The strongest arc of anyone in season one's eight episodes belongs to Maggie Gyllenhaal, who plays a prostitute named Candy who is essentially a freelancer, i.e., without a pimp. In the process, she’s able to keep her money but does not have the extra protection, which makes the character a fascinating anomaly. Soon into the series, Candy starts to become curious about the creation of pornography, especially in a time where it will soon be less taboo to watch intercourse in movie theaters. The character is a full display of Gyllenhaal's emotional range, the way she can hold stoicism and heartbreak in the same face as she did in something like "Sherrybaby." Later in the show she shares some compelling scenes with David Krumholtz, who plays an affable porn director trying to navigate the different rules.

Candy’s story is meant to be a direct juxtaposition to those experienced by the various women who work for the four pimps in the story. “The Deuce” takes its time to present the dynamic between these possessive men and their abused women, showing them drained after hours working the streets, eating food at a local diner for recharge, and in general creating an image of daily sexual slavery. These passages are fittingly the toughest to watch, for the ruthless objectification and the vile misogynist villainy constantly on display. But it does make one look right at the currency of race and privilege within such a world, namely in how a new white prostitute from Minnesota (Emily Meade) could intentionally choose the business and never be in the same imminent danger, from her clients or her pimp, as her black colleagues like Darlene (Dominique Fishback). 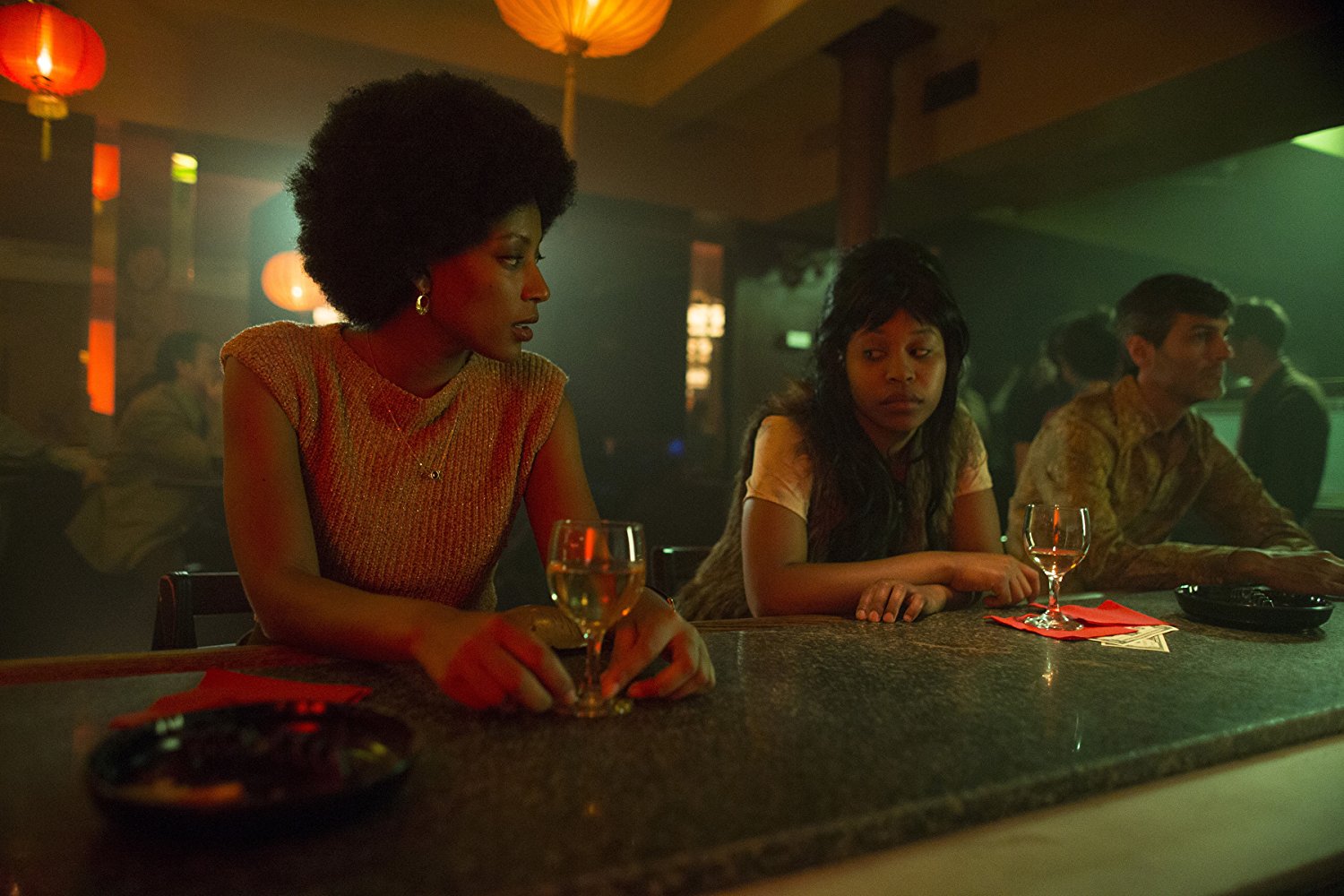 The question of why women would choose this life is hit more on the head with another storyline that involves a cop named Chris Alston (Lawrence Gilliard Jr.) who eventually becomes close with an outsider reporter named Darlene (Natalie Paul) who asks those inquiries directly. Chris’ story initially starts with a more interesting angle, with the idea of someone following orders about how to deal with nightly roundups of prostitution and when to just let it go. It’s intriguing to see his 14th precinct depicted unabashedly as a boys club, and also for him to follow orders from faceless people “downtown” who later say that 42nd Street is a “no-go” arrest zone. But this piece is another example as to how “The Deuce” starts with an interesting character and doesn’t do enough with them besides ask moral questions, often ones that are pondered by characters over the course of a few episodes.

And there’s even more: “The Deuce” takes time to follow a college dropout named Abby (Margarita Levieva) as a type of coming-of-age story for someone who learns about the crooked nature of the cops, the complicated psychology of prostitutes, and maybe a bit about a man like Vincent. At the same time, the taboos of male homosexuality are explored with brief moments watching Paul (Chris Coy), a bartender at the Hi Hat interact with men who are either proud or anxious to be gay in public. They’re more figures that fill in this world with finite arcs and images of sexuality, even if the narrative momentum can suffer. And in the case of Paul, his story does provide some very welcome, unblinking representation of male homosexuality for a show about a world that favors heterosexuality, or lesbian porn, at most.

There’s a great deal of effective world building for the show, which in part makes it compelling when the narrative seems to be taking its sweet time. The period detail is incredible with various street blocks created, along with massive sets like the various bars and later a brothel-type location, giving “The Deuce” the air of a meticulous, massive labor of love. "The Deuce" is meant to be lived in, but at what narrative cost? There’s no question that so much is going on in this story, even when Ralph Macchio shows up for five episodes to play a cop with a few lines, or Method Man has a really good scene opposite Maggie Gyllenhaal about why she needs his protection. Yet steeping people in the environment only works so much, especially once you get used to the ugliness and want these compelling characters to do more, or when the idea of exploring power plays in this world of pleasure starts to feel redundant. As “The Deuce” expands, it feels like it gets thinner and thinner.