“Ash vs. Evil Dead” is a Groovy, Good Time

Star Wars, The X-Files, James Bond, Jurassic Park—what year is it? A bit of temporal displacement is understandable given how much of our pop culture has turned nostalgic, recycling and updating ideas that worked before for a new generation. Why not turn to one of the best, most beloved horror franchises of all time for the next spin on the nostalgia dial? After decades of false starts, Sam Raimi and Bruce Campbell have finally reunited for “Ash vs. Evil Dead,” a weekly series on Starz, which allows them to get as gory and crazy as they want to be, for better or worse. There are times when “Ash vs. Evil Dead” mimics the gleeful insanity of films like “Evil Dead 2: Dead by Dawn” and “Army of Darkness,” but there are also times where it feels a bit desperately eager to please. “Remember when you loved this? Please love it again!” It settles down a bit in the second episode, especially in a great dinner scene with Mimi Rogers, and there are plenty of “Well, I haven’t seen that on TV before” moments to keep one entertained. All in all, after two episodes, I hope it becomes more of its own thing instead of reminding me of things I liked in the past, but I’m willing to take the journey to see if it gets there.

Ash (Bruce Campbell) was the sole survivor of an attack of the undead on a cabin in Michigan. He lost his hand after “it went bad,” and has been telling tall tales ever since. He picks up ladies at the bar by convincing them he saved an 8-year-old boy from the path of an oncoming train, thereby losing his hand. Ash is the same old Ash. S-Mart has been replaced by Value Stop, but he’s the same schmuck who picks up a box of light bulbs and watches them crash to the floor. He’s the awkward hero, the guy who lives in a double wide and makes minimum wage, but also wields a shotgun like a comic book icon. When he needs to be, Ash is as bad ass they come. 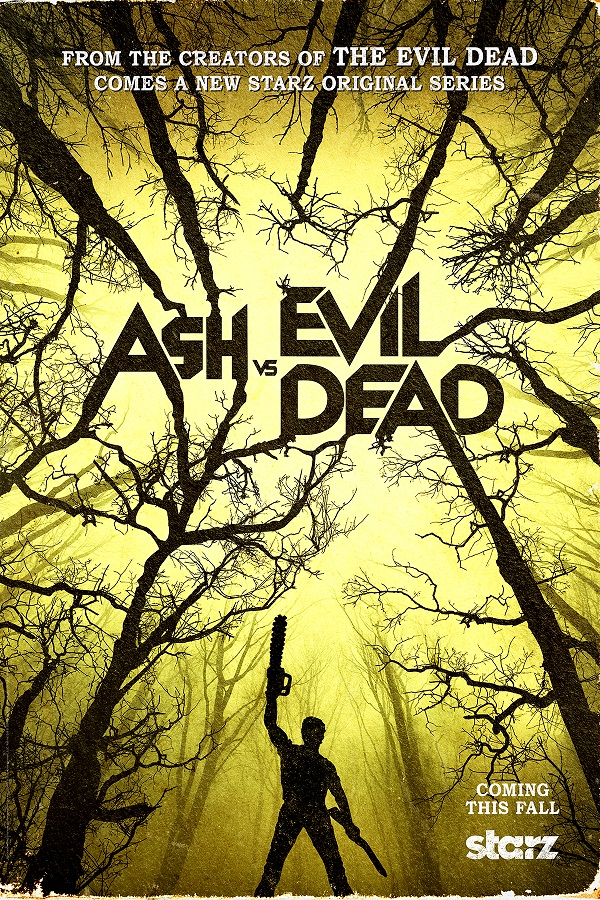 And he will need to be. After he gets stoned with a young lady, he chooses to read from the Necronomicon after she mentions her love of French poetry (which is a hilarious way to kick off the show if you think about it). Before he knows it, he’s having visions of the Deadites (people possessed by white-eyed, head-spinning demons from the other side) coming to get him.

Meanwhile, MI State Trooper Amanda Fisher (Jill Marie Jones) is called into the scene of a brutal crime with her partner, and soon confronted by a vicious Deadite. The action scene that follows, with its impalements and shotgun blasts, is an impressive one, proving that Raimi, who directed the first two episodes, brings something that your average TV director doesn’t to the proceedings. Even if you don’t know who Ash is, fans of something like “The Walking Dead” should check this out. It’s intense. And it sends Fisher on a collision course with Ash as she investigates what the heck is going on, and runs into a mysterious woman named Ruby (Lacy Lawless). Ash gets some partners of his own in Value Stop co-workers Pablo (Ray Santiago) and Kelly (Dana DeLorenzo).

“Ash vs. Evil Dead” follows the visual template of the Raimi films—extreme close-ups, canted angles, ridiculous zooms, etc. Even the cheap special effects have been mimicked, including a great scene where it looks like someone just threw a camera at Ash’s trailer and he bounced around as if it was being rocked. What’s great about a movie like “Evil Dead 2” is that these “cheap” special effects are still effective. They connect in a way to which we can relate, and the film is further grounded by the great work from Campbell. “Evil Dead 2” is a blast, and I’m happy the producers of the upgrade made a very clear decision not to “upgrade” the proceedings too much. Things still feel tactile. When the buckets of blood pour, you can feel the stickiness.

The supporting cast is good here too, especially Santiago and DeLorenzo. The former gets a great scene in episode two involving an attack in a car. And then Mimi Rogers shows up for that aforementioned dinner scene, one in which Ash is convinced she’s a Deadite and no one else is, and “Ash vs. Evil Dead” lives up to its comedy-horror potential. That scene sealed the deal for me (although, if I’m being honest, it was really an episode one bit in which Ash is attacked by a child’s doll possessed by the devil). When Ash spouted one of his typically goofy, posturing lines to tag the scene, it almost felt like no time had passed since “Army of Darkness.” Looking at the rest of pop culture, I could be forgiven for thinking it really hasn’t.