“Zoom,” a rather terrible comedy-satire, bears the DNA of at least two strains of terrible films. One is the kind of international co-production that mixes disparate cinematic cultures to contradictory effect. Here the sponsoring countries are Canada and Brazil, and if you think the cerebral chill of the former might be nicely balanced by the tropical heat of the latter, you haven’t encountered “Zoom”’s way of turning the unlikely convergence into a self-canceling formula.

The second kind of terrible film are those which resemble graphic novels. Why is it that big cartoon creations like Batman and the whole Marvel menagerie can yield very credible, sometimes excellent movies while graphic novels tend to produce overly self-conscious mediocrities? It could be that comic books create their own discrete worlds which often are readily transferred to movie form. Graphic novels, on the other hand, generally ape movies in their form and thus end up occupying a space that’s weirdly neither this nor that: part-graphic, half-novel, not wholly either.

“Zoom” interweaves three stories, one of which is animated, but it’s not the latter fact that evokes the perils of graphic-novels-into-films. Rather, it’s the whole movie’s way of nudging the viewer at every turn that the three stories are all fictions linked to the characters in the others, a tack that recalls the kind of too-clever-by-half, self-reflexive conceits that seem to be by-products of the graphic novel’s hybrid nature.

Like a mutant descendant of Atom Egoyan’s “Exotica,” the film’s first tale opens with a couple having sex in a factory that makes life-sized sex dolls. (If you didn’t know going in that “Zoom” was part Canadian, this scene would be a dead giveaway.) Emma (Alison Pill) is just taking a break from her work here, but her real passion is as a cartoonist. Working around so many anatomically superlative female figures, though, has made her self-conscious of certain perceived deficiencies in her own form. So she scrapes together the money for plastic surgery and emerges with two enormous breasts.

Only problem is, when she walks down the street, men look at nothing else. Distraught, she wants to have the damage undone, but that will cost money she now doesn’t have, which willy-nilly leads her into a scheme involving stolen drugs transported inside the head of a sex doll.

The second tale concerns Michelle (Mariana Ximenes), a native of Brazil working in Canada as a model but with aspirations of being a novelist. Dale (Jason Priestley), her boyfriend, disdains her literary ambitions and says that every man who expresses interest in them is really just trying to get into her pants. That provokes a crisis between the couple when a publisher she’s met has a very positive reaction to the chapters she’s shown him. To escape Dale’s control-freak impositions, she takes off for Brazil looking for some fresh creative air. But other complications face her there, and some follow from Canada.

In the third story, a reputable young auteur named Edward (Gael Garcia Bernal) is trying to finish his first film for a big studio. As luck (or convention) would have it, the bigwigs have told him they want him for his artistic vision and will back him to the hilt, but what they really want is a big commercial movie with his name on it. When he delivers a first cut that’s a little too weird and arty, he’s in trouble. And that’s doubled by the fact that he’s not able to sexually satisfy the female studio chief. All of which results in his being ordered to shoot a climactic action scene in, guess where … Brazil.

The latter story is the one that’s animated (i.e., it was shot using real actors, but then converted to animation). And if you haven’t guessed already, it’s a cartoon because it’s the creation of Emma from story one. But Emma herself is also a creation—of Michelle from story two.

This kind of tricky narrative circularity is no more clever or compelling that it sounds. Most of all, it’s a sophomoric game that’s very obvious early on. It can’t rescue story elements that are fast-paced but banal and contrived throughout, with characters that are never more than one-dimensional.

Actually, there’s one exception to the latter statement, and it’s the best thing about “Zoom,” which was written by Matt Hansen and directed by Pedro Morelli. Though visually reduced to cartoon form, veteran Canadian actor Don McKellar delivers a very sharp and droll performance as Edward’s industry-savvy assistant. McKellar’s dialogue, in fact, is so good that one suspects he may have contributed much of it himself. 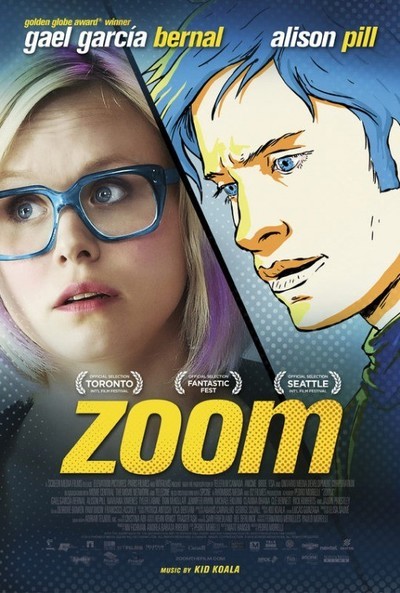