I should probably confess right up front that I have never been that much of a Frank Zappa fan. I certainly appreciated him on an intellectual level for his defiantly iconoclastic approach towards his life and work, and the two seminal albums that he recorded with the Mothers of Invention, Freak Out (1966) and We’re Only In it for the Money (1968), are part of my music collection. But listening to his music always struck me as more of a chore than a pleasure, and this is coming from someone who is a proud owner of the sustained cacophony that is Lou Reed’s Metal Machine Music. Even outside of the studio, there was something about him that I always found a bit off-putting—for every admirable thing he did, such as his courageous and principled stand against would-be music censors in the Eighties, there would be some interview in which every word he said seemed to practically drip with self-satisfied contempt for everyone who wasn’t him.

So I went into watching “Zappa,” Alex Winter’s documentary examination of Zappa’s life and work with more than a little trepidation. After all, most of the recent rash of music documentaries have been works aimed primarily at the fan bases of their subjects and rarely make any attempt to appeal to those not already in the fold—great if you are a fan but not so much if you aren’t. Despite this, or possibly because of it, I found the film to be an engrossing look at Zappa and his legacy that nevertheless avoids the mere hagiography that films of this sort run the risk of embracing when not handled properly.

Although the film unfolds in a largely chronological manner, it begins towards the end with footage of Zappa’s last recorded guitar performance, an appearance in the Czech Republic commemorating the withdrawal of Russian troops. Addressing the crowd as they prepared to begin an entirely new way of life, he advises them to “keep it unique,” a maxim that clearly drove him as well. As the film reveals, he first became interested in music as a teenager when he first encountered the works of Edgar Varese, whose rhythmic-centered compositions were often dismissed by naysayers as being nothing but noise. A friendship with Don Van Vliet, the future Captain Beefheart, led him to the blues and he began composing music that would reflect these influences, including working on the score for the legendary Timothy Carey cult classic “The World’s Greatest Sinner.”

Thus began one of the oddest careers in contemporary music, one that covered any numbers of ports on the musical waterfront and which would eventually see him working with everyone from Alice Cooper to the London Symphony Orchestra. By crass commercial standards, his incredible output over the years did not amount to much but from his earliest days, such as an extended six-month stint of concerts that he undertook with the Mothers of Invention in New York in 1967, he attracted a small but devoted cult of fans that would go on to include some of the biggest names in music. Even though his record sales were meager—at one point, Cooper remarks in an interview that he seemed to deliberately sabotage himself to avoid having a hit—he was still well-known enough during his Seventies heyday to have a couple of Top 10 albums and  he was invited to host “Saturday Night Live” at the height of the show’s initial popularity in 1978. He even managed to have a fluke hit song when “Valley Girl,” a song that he did with his daughter, Moon Unit, landed in the Top 40 in 1982.

As the film reveals, Zappa’s iconoclasm and mistrust of authority was anything but a pose. After earning enough money as a young man to purchase his own recording studio, he was set up for a vice bust and wound up losing the place as a result. This inspired a lifelong desire to poke sacred cows wherever they could be found, ranging from spoofing the pretensions of Sgt. Pepper’s Lonely Hearts Club Band with We’re Only In It for the Money, to forming his own record company so that he could record and release what he wanted when he wanted. This also led to him stepping up to testify against the attempts by the Parent’s Music Resource Center to censor music lyrics even though his songs were not the ones that had people up in arms (though some of his more questionable lyrics might have raised eyebrows if those at the PMRC had actually listened to them). Zappa became such a symbol for anti-censorship forces that after the aforementioned trip to Czechoslovakia, he was appointed the country’s cultural and trade representative to the United States.

Although the film does feature a few new interviews with family, friends, and former band members, the bulk of “Zappa” consists of material that Winter was able to access from Zappa’s own massive archives, which are voluminous to cover everything from home movies he shot with his family as a child, to working on new music only a few days before his death from prostate cancer at the age of 53 in 1993. Through all this, we get a portrait of a man who was clearly both a musical innovator and a perfectionist of the highest degree who would think nothing of rehearsing over and over again until what he and his musicians played matched the sound that he heard in his head. This single-minded pursuit of perfection—in which the concerns of all others, from audiences to his own family, were always of secondary concern—would often make him come across as monstrously self-absorbed in the eyes of many. To the credit of Winter (who has gone from co-starring in the “Bill & Ted” movies to directing a number of interesting documentaries on subjects ranging from the Internet to the Panama Papers to child actors), he does not try to sugarcoat this aspect of Zappa’s personality, though most of the colleagues who are interviewed follow up they acknowledgements of the difficulties of working with him with admissions that it was ultimately worth the trouble.

“Zappa” contains maybe two real flaws. While some of Zappa’s lyrics have been criticized for being sexist and puerile—this is the guy who wrote the deathless classic “Don’t Eat The Yellow Snow”—that aspect of his musical output is pretty much glossed over. The other problem is that the lack of any full performances of his songs will not exactly bolster the case for his musical genius among those who do not already lean in that direction. Other than that, the film is a complex and surprisingly satisfying portrait of an artist who defiantly marched to the beat of a different drummer (or two). 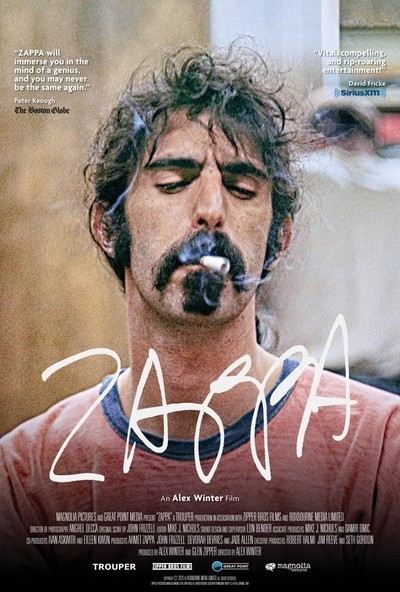