Yves Saint Laurent, the man, was a towering figure in the fashion world—a visionary haute couture designer who challenged traditional notions of feminine beauty and power.

Director and co-writer Jalil Lespert traces Saint Laurent’s life and work from the late 1950s in Paris, when the designer took over as artistic director of the legendary House of Dior at age 21, to the late 1970s, when his health was beginning to wane following decades of mental illness and substance abuse.

If you didn’t know anything about this major creative force, this is at least a decent introduction. But it doesn’t dig very deep to reveal what inspired and drove him. The drugs? The men? The adulation? As is so often the case in depicting the life of a famous, tortured artist, “Yves Saint Laurent” shows us the emotional highs and lows and the self-destructive ways in which Saint Laurent sought balance and control. But the complex soul at the film’s center—a prim and shy enfant terrible—remains elusive.

Plenty of people tell us what a genius Saint Laurent was—namely, his longtime lover and business partner, Pierre Berge (Guillaume Gallienne), who is saddled with the task of explaining everything to us in voiceover. In an unnecessary and unenlightening framing device, Berge speaks directly to the late Saint Laurent as the couple’s extensive art collection is being boxed up for auction. What he’s saying adds nothing to what we’re already seeing on the screen, and Lespert uses it so inconsistently that it doesn’t even register as a poignant source of longing and sorrow.

The vast majority of the script, which Lespert wrote with Marie-Pierre Huster and Jacques Fieschi, takes place in flashback—from Saint Laurent’s early sketches as a radiant 19-year-old growing up in Algiers to a 1976 fashion show where he can barely stand up, much less receive applause on the catwalk.

Through it all, Berge is at his side, both promoting and protecting him. An arts patron, he’s instantly attracted to Saint Laurent personally and professionally. Their early days are affectionate, playful, even a little animalistic; the matter-of-fact physicality they share is refreshing to see, even in an art-house movie.

But an assortment of people—male and female—threatens to come between them and drag Saint Laurent away from his purpose. Among them are muses Loulou de la Falaise (Laura Smet) and Betty Catroux (Marie de Villepin), as well as Saint Laurent’s friend and competitor Karl Lagerfeld (Nikolai Kinski), but it’s hard to tell what impact any of these people had on his actual work. They’re hangers-on more than anything else. Niney does enjoy some sassy, flirty interludes (as well as one explosive confrontation) with Charlotte Le Bon as the model/muse of Saint Laurent’s younger days.

And the costume design—a combination of original pieces on loan from Saint Laurent and Berge’s foundation and period reproductions from Madeline Fontaine—is as chic, elegant and luxurious and you’d hope. We see the bold tuxedos for women and the Mondrian-inspired color block dress. In one memorable, early moment, Saint Laurent takes a basic black cocktail dress and makes it something daring and original with just the addition of a white sash and bow arranged prominently at the front. The greatness is on display, but only in glimmers. 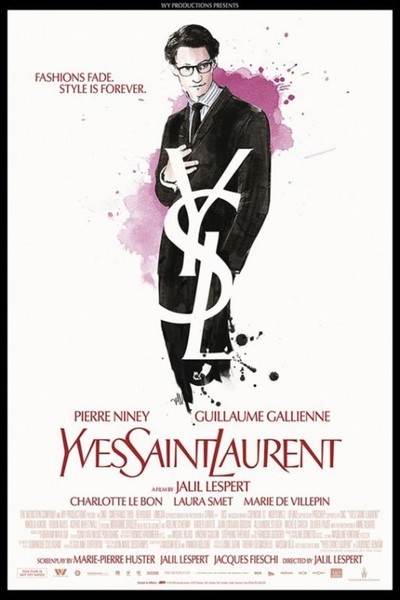