“You Resemble Me” is at its strongest when it tries to humanize its misunderstood central figure in simple, intimate ways.

Journalist-turned-filmmaker Dina Amer, with her feature directing debut, aims to make us sympathize with the plight of Hasna Ait Boulahcen, who was miscredited as Europe’s first female suicide bomber in connection with the November 2015 Paris terrorist attacks. But because the basics of Amer’s story are so compelling, the hybrid approach she eventually adopts—both in terms of visual effects and storytelling—seems needless and becomes a distraction.

“You Resemble Me” grabs you from the beginning as it follows nine-year-old Hasna and her seven-year-old sister, Mariam, whiling away their days without structure or supervision. Real-life siblings Lorenza and Ilonna Grimaudo have an engaging naturalism as the young girls, dressed in matching pink, floral frocks (which Hasna shoplifted) with their hair in the same messy top knots. They climb, run and tumble, with Amer’s kinetic, hand-held camera following them every step of the way. Their physical resemblance and the tight bond they share are key to the film’s title. Their childhood seems joyful and free—but not for long.

In unadorned and often harrowing detail, Amer depicts Hasna’s many hardships as a French-Moroccan child to shed light on why she would be attracted to the violence of ISIS as a woman. We see the neglect and abuse she suffered at the hands of her mother at home and the racism she endured on the streets of Paris. Watching her mother beat her and throw her out of the family’s cramped apartment—with the worshipful Mariam following closely behind—is heartbreaking, as are the images of the grubby girls foraging for food, begging for change, and struggling to stay warm under the glittering, nighttime lights of the Eiffel Tower. Amer wisely stages these moments in a neorealistic, verité style. Their emotional power is implicit.

When Child Protective Services splits the sisters up and places them in separate foster homes, though, it’s a pivotal moment in Hasna’s evolution. The superficially pleasant and polite white family that takes her in not only straightens her hair but also forces her to eat pork during Christmas dinner, despite her protestations that it’s against her Muslim beliefs. She whispers to herself in the bathroom mirror, “I know who I am,” but her grasp on her identity seems increasingly in peril.

Amer then jumps forward in time, with a tough and defensive Mouna Soualem now playing Hasna in her mid-20s. Deprived of an education, she struggles to hold a basic fast-food job and sells drugs and turns tricks for quick cash. It’s here that we see Amer’s first dabbling with the deep-fake technology that will allow her to portray this character with various faces, depending on the version of herself she’s presenting to the world. Sometimes, when she’s the “whore” she thinks men want her to be, she’s played by the more conventionally pretty Sabrina Ouazani. Ultimately, Amer will place her face on Hasna as she ascends the stairs of the Eiffel Tower, surveying the city from a different angle and with a newfound purpose beneath a hijab. The faces change from one to another within the same scene and even within the same breath.

But the gimmick grows old quickly. She’s trying to make a point about how the fragmentation of this young woman’s life led to her confusion and untimely demise. But rather than drawing us in, this tactic distances us from the substance of Hasna’s struggles, and it detracts from the raw, visceral nature of Soualem’s performance.

Rekindling a relationship over Facebook with a charismatic, long-lost cousin (Alexandre Gonin), who’s now notoriously high up within the ISIS organization, finally provides Hasna with the sense of community she’s long craved. It also gives the film a simmering tension as we wonder just how far she’ll go in the name of love and belonging.

“You Resemble Me” shows us that Hasna was not, in fact, responsible for the bombing authorities originally pinned on her. We see her fight to flee the apartment and become trapped when the explosion occurred. That’s damning and devastating enough—but then Amer complicates the story further by including interviews she’d done early in the research process with Hasna’s mother, brother, and the grown-up Mariam. Suddenly it’s a documentary, and jarringly so. This section at the tail end of the film is intriguing, but it feels tacked on, and it suggests that she should have made either a fictional narrative or a straightforward, non-fiction one. What we finally see resembles both, and yet neither. 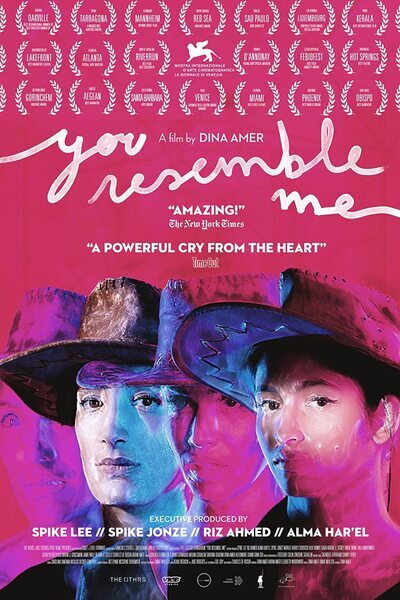