David Arquette did the unthinkable back in 2000 when he took the World Championship Wrestling Heavyweight Champion belt, all as part of promotion for a movie. For a Hollywood guy to just take the title, especially one that so many adored wrestlers have built their career towards, was sacrilegious. Arquette’s two-week stint as heavyweight champion became a sore spot in wrestling history, turning the "Scream" actor into a sworn enemy of wrestling fans. Which is too bad, because Arquette is a big wrestling fan himself. And as he proves in this documentary based around his serious return to the ring, he’s got his heart in it.

But even for a movie about a theatrical sport, focused around an actor who wants to learn what it's like to wrestle for real, "You Cannot Kill David Arquette" rings far too much like a vanity project. The movie doesn’t quite negotiate the idea of him both being a celebrity and also a longshot within wrestling, and any time it wants us to pat him on the back “for doing it the right way” it reminds us that the game is different for him than the people he wants to rumble with. Especially as he builds up his resurrected career on the independent wrestling circuit, sometimes you can’t help but think that he’s fighting people with lesser fame but far more time in the ring.

Co-directors David Darg and Price James jump right into Arquette's dream of taking back this part of his life, and as much as they want to have a “Rocky”-like real-life story, they tell it in a strange way. Every now and then, the editing will return to explaining why he’s doing this—that he’s always loved wrestling—or his end-game of simply trying to get better. But the movie takes off with Arquette simply deciding to do this, and then later tries to show him proving that he's not joking. Arquette decides that he should get a trainer, and even goes to Mexico to rumble with luchadors. These scenes are sweet, and show a growth in Arquette’s wrestling skill. But however big the charm of these scenes, it's all still surface-level.

The film could have done more with emphasizing what this all means to Arquette's career as an actor. Early on, as the doc tries to sell him as a can-do underdog in Hollywood, Arquette talks about getting rejections for ten years: “Who does that?” he asks. But the smallest glance at his IMDb shows that he has indeed been working, whether or not he’s entirely proud of the work or not. In turn, the stakes of the movie are lightweight—it’s a redemption that’s strictly personal, and doesn't seem like it would affect his acting career if he bowed out.

Watching Arquette get his ass kicked proves to be a vital element to this movie, as its most brutal sequences emphasize how serious Arquette is about this goal. One of his first times back in the ring is for a backyard tournament, which really is just a bunch of Virginia friends with their own mat, smashing light tubes against his back, throwing him on tacks, giving him the treatment any wrestler would get. As an extension of the anger that wrestling fans have toward him, he essentially gets a beatdown, and as part of the community's slow-growing respect for Arquette, the wrestlers take pictures with him. A “death match” scene later on against a wrestler named Nicolas Gage is far less cordial, but Arquette chooses to get pinned instead of walking away, despite a big gash in his neck. The moment is as raw as watching someone trying to slowly murder Arquette in front of a hundred or so people.

Arquette's trajectory as a wrestler is impressive, and the documentary packs a lot into a montage that could have been expanded, concerning how he gets better match by match, and starts to change his image in the wrestling world. The usage of TMZ commentators to provide a public's reaction is gross simply because it’s TMZ, but it does show the scope of this rehabilitation—outside of wrestling, it was still happening on the fringe of stuff actually worth reporting about.

“You Cannot Kill David Arquette” is a funny way to spend time with the energetic actor, but because it’s just kind of following him around and then trying to make him look cinematic in the footage of his matches (with slow motion, and dramatic music as per the last match), it doesn't really dig into its own story. Arquette does this because he wants to, because he can, and we get some entertainment out of it. It feels too often that the movie, and its title, is more meant for Arquette than it is for us. 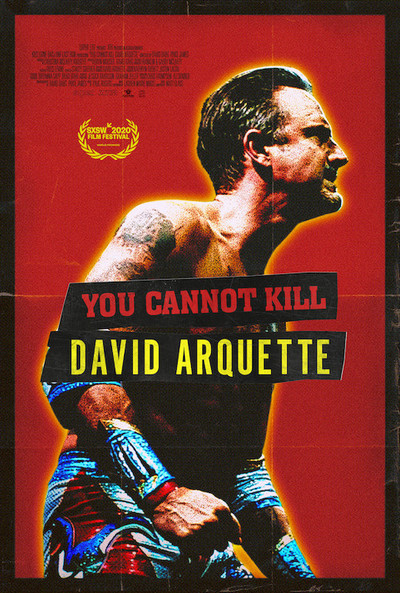 David Arquette as Self

Kevin Nash as Self

Rosanna Arquette as Self

Patricia Arquette as Self

Richmond Arquette as Self

Luke Perry as Self

Courteney Cox as Self

Ric Flair as Self

Christina McLarty Arquette as Self