When I was a kid, the guy who taught music classes in my school was an aging hippie with a long beard. He'd hand out tambourines and triangles and teach us simple songs. At the end of each class, he would regale us, unprompted, with first-hand stories of Beatlemania. He basically lived out the real-life version of Robert Zemeckis' "I Wanna Hold Your Hand," traveling to New York City with his friends to try to score tickets to "The Ed Sullivan Show" for the Beatles' historic first appearance. (He failed, but he did stand in the mob outside the hotel where the Beatles were staying.) We were 8 years old and had no idea what he was talking about. His enthusiasm was catching, though. I learned how to harmonize by singing along to my parents' Beatles albums. (I recommend this approach.) The Beatles were just there, absorbed by osmosis. If nothing else, Danny Boyle's "Yesterday," which imagines a world where the Beatles never happened, made me think about what would it be like to hear "Yesterday" for the first time, what life would be like if the Beatles didn't exist. The film, scripted by Richard Curtis, explores some of the implications of its premise, but, frustratingly, skips over others.

To call Jack (Himesh Patel) a "struggling musician" is an understatement. He plays in coffee shops, populated only by his friends. He sings on an empty boardwalk. His childhood friend Ellie (Lily James), who fell in love with him—and his music—when he played Oasis' "Wonderwall" at a talent show in grade school, acts as his manager, giving him pep talks, fired up by her belief in him. He lives with his parents in Suffolk, and is ready to throw in the towel when, one night, the earth experiences a 12-second blackout. During those 12 seconds, Jack is hit by a bus, and when he wakes up in the hospital realizes something weird has happened when he says to Ellie "Will you still feed me when I'm 64?" and she doesn't recognize the lyrics. “Why 64?” she asks with curiosity. Jack races to Google, and no matter what the combination of search terms, no trace of the Beatles is to be found. Curtis has a lot of fun with how absurd it would be if you mentioned "The Beatles” to people and they asked "What's that?" Jack makes the choice to start playing these "lost" songs, passing them off as his own.

He plays "Yesterday" for his friends, and the looks on their listening faces is a potent—and welcome—reminder of the song's melancholy beauty. The entire film stops, allowing us the space to really listen. But when Jack plays the songs at gigs, he's just background noise. So this makes him wonder: maybe it's me who is the problem? The songs are great, but I am not. There was an alchemical thing that happened with the Fab Four, and without that, maybe the rest wouldn’t have followed. This is an interesting possibility, which the film for the most part does not explore. Eventually, Jack records a few of the songs, appearing on local television shows to promote “his" music. Ed Sheeran (playing himself in a very self-deprecating cameo) catches one of these television spots, and swoops in to take Jack on tour with him. When Jack decides to play "Back in the U.S.S.R." to an all-Russian crowd in Moscow, mayhem erupts (it's a great scene), and the video of the performance goes viral. Sheeran murmurs, "I was always told someone would come along and be better than me. You're Mozart and I'm Salieri."

Debra Hammer (Kate McKinnon), a shark-like record label exec sidles up to Jack after a show, talons out, and before he knows it, he's in Los Angeles being offered "the poisoned chalice" of fame (as Debra calls it). McKinnon puts such a deadpan spin on lines like: "I have a question, Jack. Is this as good as you can look?" that she almost single-handedly indicts the entire PR machinery of show business. The music industry is lightly lampooned, when some ad exec. nixes the album title Sgt. Pepper's Lonely Hearts Club Band as having "too many words" and points out that calling an album The White Album has "serious diversity issues." There are some fun sequences, like Jack trying, with a sense of increasing urgency, to remember the lyrics to "Eleanor Rigby," fearing if he doesn't the song will be lost forever.

"Yesterday” dodges many of its most interesting ideas. Jack is a worldwide phenomenon almost instantly. But if the Beatles hadn't happened, there would have been a ripple effect. It's incorrect to say "Well, if it hadn't been the Beatles, it would have been someone else." That's not how culture works. So much of it is lightning not striking twice, of right-place-right-time mixed with the right combination of people at the right moment. It had to be John, Paul, George and Ringo. In "Yesterday," the music business is more or less the same as it is now. But how many artists have been inspired by the Beatles, and then that inspiration flowed into the next generation and the next? How many contemporary songwriters still show the Beatles' influence? It's very intriguing early on when Jack plays Beatles songs at coffee-shop gigs, and nobody even looks over. The music has zero impact on these people. What if things had developed so differently in the Beatles' absence that people would have no idea what they were missing, and, frankly, wouldn't care, because how can you miss what you've never had? These ideas are present, but "Yesterday" doesn't dig into them.

The film gets caught up in the relationship between Jack and Ellie, which is not all that interesting, pieced together with cliches from other films. "Yesterday" wants to be a feel-good movie, and much of it did make me feel good. The looks on his friends' faces when they hear "Yesterday" for the first time was very moving. I am conflicted about a choice made late in the film. You'll know it when you see it. It felt cheap to me, and also strangely underdeveloped, although the line "It is so good to see you" got to me. Like I said: conflicted. 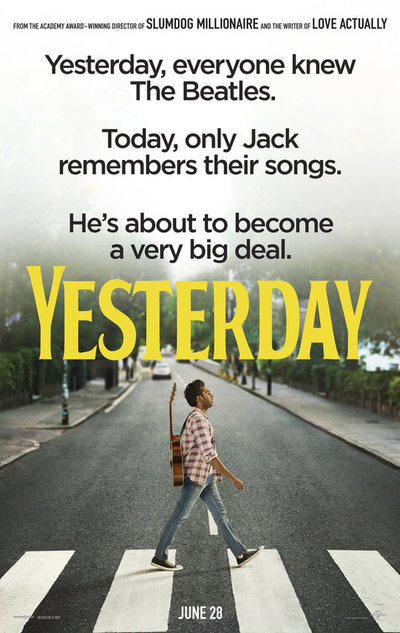 Lamorne Morris as Head of Marketing