Wish I Was Here

People get angry about Zach Braff. First there was the backlash against the hugely popular "Garden State," his first feature; backlash that seemed out of proportion with the film itself. And then, 10 years later, came Braff’s crowdfunding campaign for his second feature, "Wish I Was Here," co-written by Braff and his brother Adam. Braff had been unable to find anyone willing to give him money so he turned to his fan base. In 48 hours, the film was fully funded, which speaks volumes about the love his fans have for what he does. But, again, that campaign launched a library of worried and sometimes angry think-pieces about crowdfunding (should it be used by famous people, especially someone like Braff who is so well-paid for his television work?), the state of movie-making, and all things Braff.

While there were some good points made about the problems with Braff’s situation, the rage again seemed out of proportion (at least to this observer). If Kickstarter had been around when Cassavetes had to stop production of "Opening Night" in the middle of filming because he ran out of money and had to run around begging for more cash, it is not impossible to imagine Cassavetes going that crowdfunding route.  It is also not impossible to imagine that Orson Welles would have set up a Kickstarter campaign instead of having to spend his time wining and dining "hustling semi-Armenian Russians” to give him money to complete (or even start) his projects. Not that Braff is comparable as a director to Welles or Cassavetes. But, as Braff said, in a recent interview with RogerEbert.com editor Brian Tallerico, “The system is broken.”

Yes. It is good. It is sincere, funny, thoughtful and spiritual, often poignant, and with a deep strain of existential worry running underneath the whole thing. The worry is not eradicated at the end. But maybe the characters can find a life that suits them, that pleases them, in the midst of worrying about what it all means. At its best, "Wish I Was Here," (the title alone expressing the disconnect so many of us feel about actually experiencing the minutia of our own lives) is all about that. It doesn’t break new ground, but it is a personal film, something audiences are hungry for, with Braff’s particular spin on the universe. "Wish I Was Here" is a good story with interesting characters, thoughtfully told.

Aidan Bloom (Zach Braff), is a harried and harassed father of two kids, an unemployed actor, still auditioning for bit parts on series on the SyFy channel. He could be the character in "Garden State," only 10 years down the line. Aidan’s wife Sarah (Kate Hudson) works for the L.A. Water Department, and endures sexual harassment from her cubicle-mate, but she is the bread-winner in the family, and can’t quit. Their lives have been set up to support Aidan’s dream, a dream that is slowly dying, but Aidan can’t let go of it. And Sarah is losing patience with the entire situation.

The pressure cooker of the Bloom domestic drama is intensified by the presence of Aidan’s father Gabe (Mandy Patinkin), who has learned he is dying of cancer. Aidan’s father raised his two sons Aidan and Noah (Josh Gad) in the Jewish faith, only to see them both fall away from it. Aidan has married a “half-Jew,” protests Gabe at one point, and Gabe is mortified that Aidan isn’t even man enough to support his own family. And Noah, who was thought to be a genius when he was a child, has now dropped off the grid, and lives in a trailer on the cliffs by the beach, dreaming about “becoming a blogger.”

Gabe finances the education of Aidan’s children, Grace (played beautifully by Joey King) and Tucker (Pierce Gagnon), paying the tuition at an extremely conservative private Jewish school. The children have embraced their Jewish identity to such a degree that Grace is looking forward to shaving her head one day and putting on a wig. Aidan refers to his children as “brainwashed matzah balls.” Grace rolls her eyes. When Gabe can no longer pay the tuition because he needs the money for his cancer treatment, the kids are pulled out of their beloved school and Aidan begins a disastrous course of home-schooling.

The film doesn’t quite hold together, and there are some digressions that feel pointless (the Comic-Con visit being a prime example). There is also an ongoing motif involving a spaceman running through the woods or across a desert, accompanied by a floating beeping bot, and it’s meant to be representative of…a mixture of the games Aidan and Noah used to play when they were kids and a sense of approaching mortality; it's something along those lines, but it’s too vague to know for sure. The spaceman sequences lack emotional reverb and don't add to what we are seeing elsewhere.

The rest of the film makes up for it, though, with good scene after good scene, allowed to play out. Aidan and Sarah sit at a lifeguard station on the beach at night, talking about their lives, trying to re-connect as a couple. Sarah, who has always had a wary relationship with her judgmental father-in-law, has a killer scene with him in the hospital, where she tells him, in no uncertain terms, what his two adult sons need from him. Both Hudson and Patinkin are incredible in that scene. There are amazing scenes between Aidan and his kids, especially his daughter. He is baffled by Grace, and wants to be there for her, and doesn't know what she needs.

The script is quite funny, with some casually tossed-off one liners that don’t feel too-clever or like punch lines, but feel the way people actually talk when they are exasperated and at their wits’ end. Aidan comments on a guy who drives a ridiculous vehicle: “Who drives a yellow Hummer? What … is he going to war? On the sun?” Aidan’s backyard pool is empty and weed-ridden, and Aidan’s father takes a look at it and says to his son, “Nice little slice of Mumbai you got back here.” And then there is the bearded black-hatted rabbi, roaring with laughter about kitten videos on Youtube, or careening through the hospital hallways on a Segway, crashing into a wall in the background. Braff has a really good eye and ear for this stuff—character-based and character-driven strangeness and singularity.

There are two dream-like sequences involving Aidan and his two kids which are emotional and powerful—one happening during a camping trip and one happening during a "Karate Kid"-like rebuilding of the fence in the back yard. Both involve poetry being recited (T.S. Eliot's "Love Song of Alfred J. Prufrock" on the camping trip, and Robert Frost's "Mending Wall" in the backyard), both involve sudden slo-mo, a collage of images, the family laughing, horsing around, etc.—the beautiful moments that make up the majority of our lives. Yes, life is chaos. And people die. And we need to make amends. We need to grow up and take responsibility for ourselves. But moments like a small girl wearing a bright pink wig, standing on a diving board over an empty pool, reading "Mending Wall" to her brother and father, who are busy repairing the back fence, are the glue and the concrete that hold families together. Braff understands that, and prioritizes that in how he films these two beautiful scenes.

There is one stunning image of Aidan and his two children, each perched on a separate rock out in the desert, black-silhouettes against the dreamy lavender sunset, talking about things, like what the word "epiphany" means. There is an openness between the characters, an accessibility. It's refreshing.

The acting is excellent across the board. The music is extremely intrusive, something that was true in "Garden State" as well. Not only is it intrusive, but it is predictable: A scene plays out with no music in the background, and the actors are doing their work and doing it well. The scene is landing. Two or three lines before the ending of the scene…in comes the music cue. The timing was so predictable I could have set my watch by it. The work is already there on the screen, and the music ends up feeling manipulative when the story itself is not. It's one of Braff's "tics" and it's in full gear in "Wish I Was Here."

Annoying as that was, the story got to me. The characters got to me. Death is at the end of the road for all of us but, to quote T.S. Eliot's poem again, a masterpiece of anxiety:

Everyone is on a quest. Everyone needs to ask, "Do I dare?" in order to make meaningful changes. We are held back from connecting to one another due to preconceived notions about what life should be like, or disappointments in ourselves and in each other, or the regular old stress of everyday life. "Wish I Was Here" shows what happens when people are forced to slow down, assess their lives, and ask the big questions; face the big moments, death, and disappointment. We are stronger than we realize. 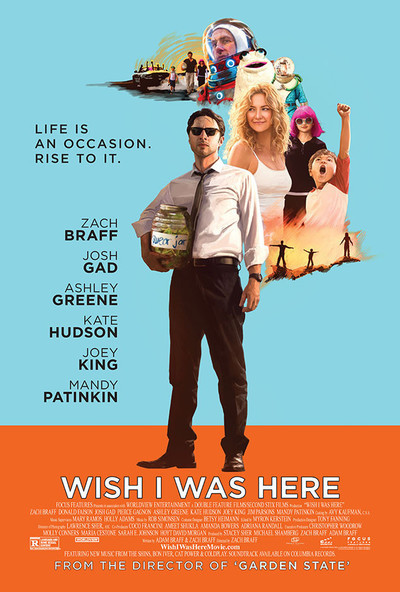