Evgeny Afineevky’s “Winter on Fire: Ukraine’s Fight for Freedom” is the latest Netflix-backed documentary that, like “The Square” before it, converts a popular political uprising into stirring real-life drama. Though the film is limited by a point of view that’s too polemically reductive, the idealistic, difficult, sometimes lethal struggles it covers are undeniably revelatory and moving.

A Russian-Israeli filmmaker now based in Los Angeles, Afineevsky led a large crew (dozens of cameramen are credited) that observed the revolt against Ukrainian president Viktor Yanukovych centered on Kiev’s Maidan Square for 93 wintry days in late 2013 and early 2014. That footage, some of it quite amazing, might be called the film’s first stage. The second comprises interviews with participants that were filmed after the revolt’s conclusion and intercut throughout the film. The third stage, as it were, involved bringing in longtime David Fincher editor Angus Wall (who also produces docs for Errol Morris) and certain associates to polish and shape the film into one that would be comprehensible and appealing to Western audiences.

The Wall team’s contributions are evident in the film’s opening, which gives a succinct account of the Maidan revolt’s background: Yanokovych, a corrupt autocrat of the most blatant sort, had been promising an economic agreement with the European Union that would help further integrate Ukraine, which declared its independence from Russia in 1991, into Europe. When at the last moment that agreement wasn’t forthcoming, Euro-inclined Ukrainians took to Maidan Square to protest.

The first day, alerted by Facebook posts, about 2,000 people gather. Their numbers continue to grow with each passing day, and their central demand is that Yanukovych resign. Beginning on the tenth day, the government begins fighting back—literally. During the night, Berkut troops, as the military police are known, attack the protestors. The violence —and the defiance of it—escalates steadily during the coming weeks, as the black-armored and helmeted Berkut are joined by paramilitary thugs and plastic bullets give way to live ammo.

The film emphasizes the diversity of the protestors, which include people from all over Ukraine and many different walks of life, from professionals to students to laborers to clergy. Additionally, many different faiths are united with non-believers, while Ukrainian nationalism and pro-European, anti-Russian sentiment form the common thread. The frequently used interview segments not only help chronicle and explain the revolt as it unfolded, they also give us a sense of who these protestors were, as well as their sincerity and dedication to their cause.

The dedication leads to displays of courage that sometimes are quite astonishing and form the film’s fiery emotional core. Refusing to back down or flee no matter how many merciless troops and deadly bullets come flying at them, many protestors deliberately put themselves in harm’s way, and some pay the ultimate price for helping wounded friends. Finally, some 125 die and hundreds are wounded before Vanukovych buckles from the turmoil and flees the country.

Seeing people putting their lives on the line for “freedom” can’t help but be powerful and inspiring, and the film emphasizes how much of this commitment came from the generation of the '90s, who came of age after the yoke of Soviet domination had been removed. Once people have tasted freedom, Afineevsky suggests, it’s hard to get them to return to tyranny.

“Winter on Fire” offers a more conventionally presented and factually informative account of the Kiev uprising than Sergei Loznitsa’s alluringly formalistic “Maidan.” Yet it misses a wider view that might have complicated and undercut its noble but simplistic unity-of-the people uplift. We hear almost nothing of the influence of foreign powers in the Ukrainian struggle, and very little of what was going on within the Ukrainian Parliament at the time Kiev’s streets were roiling. Yanukovych, after all, was popularly elected, and what one side would call a “revolution” the other side would deem a “coup.”

Indeed, the film would be better if it helped us understand why one side in Ukraine inclines toward Europe while another leans toward Russia. The Maidan uprising, after all, didn’t lead to a peacefully unified country. It led to new elections and leaders, but also to a de facto and ongoing civil war in which over 6,000 people have been killed. 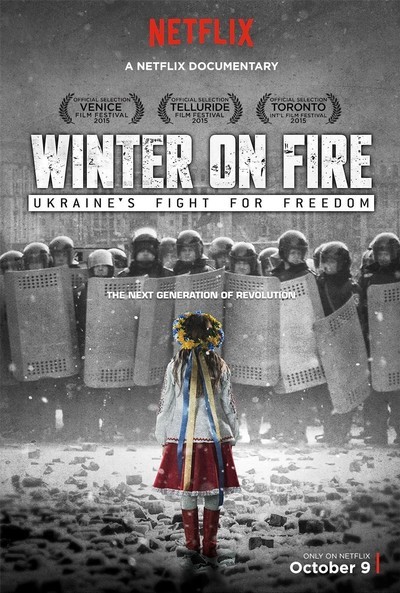