Talking about the healing power of animals is more than New Age gibberish. Dogs are currently being trained to monitor the blood sugar levels of diabetic owners, and scientists are cautiously beginning to explore the claim that they can sniff out some cancers, too. Cats lie on their people and purr in an attempt to heal, and just listening to the sound calms anxiety and stress. This hypothesis is taken to its extreme in “Wildcat,” a new documentary about a man needing redemption and a cat in need of saving.

The man in question is Harry Turner, an Englishman in his early twenties who was deployed to Afghanistan when he was 18 years old and emerged from his tour of duty with burn marks on his arms and severe PTSD. Such extreme trauma requires an extreme solution, and so Harry travels literally to the other side of the world in search of peace. That would be the Peruvian Amazon, where Harry follows a similarly troubled American Ph.D. student named Samatha Zwicker to volunteer at her wildlife research and rehabilitation center, Hoja Nueva. There, these self-described “lost souls” turn to the jungle—and each other—for comfort.

The film never reveals how Harry and Samatha met, and it’s not clear until midway through that their relationship is romantic. This was presumably done to respect the subjects’ boundaries; Samantha, in particular, has probably been to some therapy, based on her ability to communicate her feelings clearly. But it does raise some questions about transparency on the part of filmmakers Trevor Frost and Melissa Lesh, who also include some manipulative scenes with Harry and his family later in the film. “Wildcat” also does little to expand the narrative around two white kids in the Peruvian jungle trying to protect the forest from, well, Peruvians. Again, Samantha is the more conscious one here, but the filmmakers are content to leave the context of Harry and Samantha’s presence along the Las Piedras River unexplored.

Instead, “Wildcat” focuses on a different bond: Harry’s unusual, highly emotional connection with a baby ocelot named Keanu. Keanu is actually the second baby ocelot Harry has hand-raised; the first 15 minutes or so document his relationship with another cat named Khan, who (spoiler alert) dies after being shot by poachers mere weeks before he was supposed to go back into the wild. Harry takes Khan’s death extremely hard, to the point where he becomes despondent and suicidal. One starts to wonder if maybe this young man is hanging too much of his mental stability on a cat, but this is only the beginning.

It’s a comfort knowing that Harry is never really alone in the jungle, even when Samantha gets called back to the U.S. to finish her thesis. Frost and Lesh were there throughout, which is important because Harry goes through some very dark periods when he’s “alone” with his memories of the war in the rough platform building he calls home. The thing that keeps Harry going is his bond with Keanu, who Harry is hand-raising in the style of a mother ocelot so Keanu can rejoin the wild when he gets old enough to fend for himself.

And Harry does act like Keanu’s mom, teaching the young cat to hunt and breaking down in tears when he spends the night alone in the jungle for the first time. (They grow up so fast—in this case, in 18 months.) It’s not clear if the intense experience of mothering this animal, and the emotional rollercoaster that comes with it, is helping or hurting Harry; when the time comes to push Keanu out of the proverbial nest, the tough love required opens a vein of anger inside of Harry that’s frightening to watch. The swelling strings on the score tell us that this is all productive, and the project's thesis requires that Harry come out of this experience a changed person. But he really should be enrolled in some aftercare after essentially using a stint at a wildlife rehabilitation center as intense PTSD therapy.

To Harry, Keanu is family. Everyone else in this film is family, too, whether biological or chosen. And it is an unfortunate truth that other people’s family albums are more interesting to them than they are to anyone else. (Take the sequence where Harry’s parents come for a visit, which is edited together like a vacation video.) Exceptions can be made for baby ocelots, of course, and the portions of the film that are just footage of Keanu romping and pouncing and not knowing his own strength provide the dopamine jolt that viewers crave from a movie like this one. But while the points where “Wildcat” goes beyond simply being a feel-good nature documentary and delves into Harry’s mental health struggles are honest, they raise more questions than they answer. Keanu will be fine. It’s his human parent one worries about.

Now playing in theaters and available on Prime Video on December 30th. 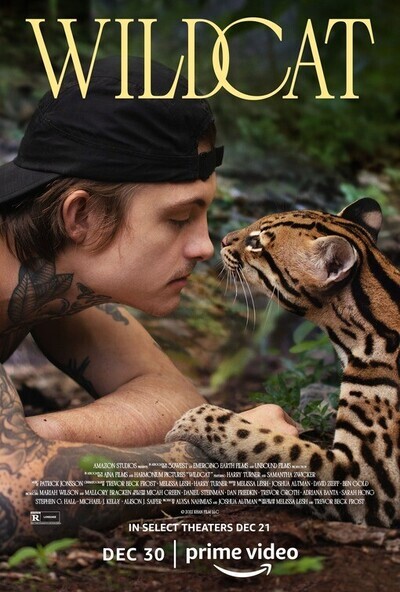 Dante Cueva Altamirano as Self

Cristian De La Cruz as Self

Erick Scott Vargas Laura as Self

Roxana Cachique Rengifo as Self

Colette Turner as Self

Harry Turner as Self