Hong Kong neo-noir "Wild City" takes its time going everywhere it needs to go. That's not a diplomatic way of saying that the film is boring, nor is it a polite way of admitting that the film is poorly paced. Instead, "Wild City," the first feature film written and directed by master Hong Kong filmmaker Ringo Lam ("City on Fire," "Full Alert") in 12 years, is unhurried, stylish, and completely unreal. This is a movie that introduces you to T-Man (Louis Koo, contemporary Hong Kong cinema's answer to Chow Yun-Fat), its jaded lead protagonist, by showing him staring off in the mid-distance on a crowded Hong Kong street corner. This is shortly after T-Man laments that money corrupts everything, a theme that the film returns to frequently. T-Man's world of middle-men gangsters, fairweather associates, and commonplace violence feels real because Lam takes his sweet time while rehashing a story you've probably seen in one form of another. This is a film noir that is, despite some jittery, Tony Scott-esque action sequences, so cool, that you will leave it begging for a sequel.

Meet T-Man, an unfortunately-named anti-hero who could easily stand shoulder-to-shoulder with modern pulp heroes like Jack Reacher or Jason Bourne. T-Man, a bartender and haunted ex-cop, is the kind of pragmatic gentleman who gracefully gives Yun (Tong Liya), a mysterious drunk, a couch to crash on after she gets in a bad car accident, but also casually asks step-mom Mona (Yuen Qui) to be his "witness" that he did nothing untoward to Yun. Yun may be the crux of a mystery that involves a stolen briefcase, a gang of lead-pipe-wielding thugs, and T-Man's brother Chung (Shawn Yue). But "Wild City" is all about T-Man, a not-all-good guy whose wardrobe comes in shades of white: bright-white khakis, and cream-colored jackets all look amazing on Koo.

"Wild City" is also a film with twists that can be seen from a mile away, though that doesn't really matter. "Wild City" reminds me of a line from a recent Leonard Cohen song: "I've always liked it slow/slow is in my blood." You could easily believe that line is true of Lam, even if "Wild City" is the first film you've seen by Lam. To be fair, the film is clearly made by an older filmmaker who wants to prove his relevance by modernizing his style in some ways, and retaining its laid-back essence in most others. So some of the film's chase scenes are frantic, full of jittery in-camera effects, over-exposed lenses, and choppy editing that give you the feeling of being shell-shocked during pivotal chase scenes. And some lines of dialogue are hokey as sin, particularly when T-Man laments that he gets no kick from money: "In exchange for time that can never be returned, this printed paper is all over-valued."

Luckily, Koo delivers a star-worthy turn and holds "Wild City" together in the same way that Chow Yun-Fat and Lau Ching-wan did for Lam's earlier efforts. Koo is so good that he makes you see Lam's style as style, and not a desperate collection of aesthetic quirks. Just look at the scene where Chung, Yun, and T-Man have a fight while they're aboard a small yacht (!!!). When Chung storms off in a huff, and starts swimming away from the boat, Yun innocently asks T-Man: "Can he make it to shore?" Koo replies with a pregnant, Bogart-esque pause.

Koo is unstoppable in "Wild City." He nails a Mametian line as slick as "I trust you. But I don't trust the money." Koo is so damn charming that he even looks good during a foot-chase where his gangly physical appearance should make him look as hip as Tom Hanks (long legs, ball cap, freshly-pressed white khakis: move over, dadbod, here comes: starched-collar-bod!).

Watching Koo, as T-Man, fire a gun in the air to disperse a crowd is thrilling because it makes you want to believe that he's not playing it cool, but rather introducing you to the next big dime novel hero. I have purposefully kept the film's plot a mystery because the joys of "Wild City" come from getting to know the characters through their bitter one-liners, romantic behavior, and sensational confrontations. Case in point: there's a scene of violence later in the film that is so shockingly grim that it's a small wonder that it works within the context of the rest of the film. The scene in question is a real make-or-break moment, a perfect test of whether or not you can surrender to "Wild City" as an eccentric, but essentially formula-driven narrative. When you see it, you will gasp. 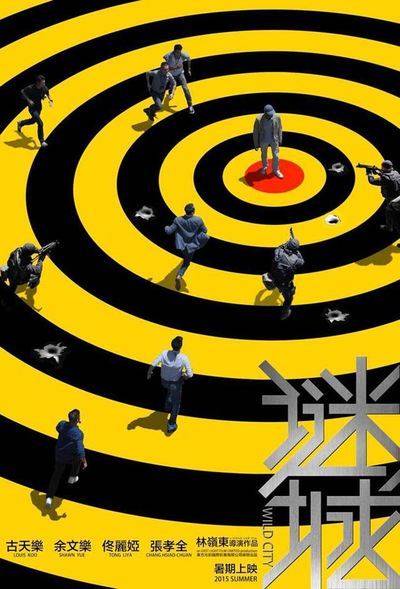