"Wigstock" is an annual outdoor drag festival held on Labor Day every year in Manhattan, where, the city being fairly blase about such events, most of the audience looks straight and middle-class, and the performers extol dressing in drag and wearing outrageous wigs as a form of self-discovery. Therapy, even.

The show is a sort of low-rent Woodstock, with a big stage, a painted backdrop, and a great deal of amplification equipment for the performers, most of whom lip-synch to hit songs, and one of whom is actually named Lypsinka.

There is a career to be made here: Lypsinka has become an underground star, and then there is the towering superstar RuPaul, coming home to the show that started it all, and remembering that he was advised he was just too tall to be a woman: "There wasn't no big, black drag queen in the pop world," they told him, but "look at the - - - - - now!" The documentary, filmed at the 1992 and 1993 Wigstocks, goes backstage to show performers rehearsing and philosophizing about life in drag. It's a little startling to see them in and out of costume and makeup, and to realize most of them actually look better as women than as men: It's like a little object lesson about how much women, too, depend on makeup to create illusion.

We meet "The Lady" Bunny, who emcees the event, has a sense of humor about it, and tries to persuade the city to put a wig on the Statue of Liberty (no luck). And Alexis Arquette, brother of Rosanna and Patricia, and looking enough like them that they could do a family version of the Andrews Sisters. And the Dueling Bankheads, who are more or less what you would expect, twin Talullahs - except, of course, that you wouldn't expect them.

The usual female singers are evoked in the lip-synch numbers: Barbra Streisand, Liza Minnelli, Diana Ross. Lip-synching is an art I have never much appreciated; in the old days of TV's "Original Amateur Hour," it ranked down there somewhere below playing "Lady of Spain" on the accordion. What is good, onstage at Wigstock, is the dancing; we see the hours of rehearsal that go into the routines, and it's obvious many of the performers are gifted, probably professionals.

The underlying message of "Wigstock" is pretty obvious. The drag queens discuss their lifestyle as if it were the most normal things in the world, while we're thinking, gee, maybe it would seem more intriguing if they weren't so matter-of-fact. There is a sense in which all those who deviate from the norm - body piercers, leather fetishists, transvestites, people who get tattooed, or are into S&M - seem compelled to tell us how ordinary and healthy their practices are, when I, for one, would be more interested if they said their lives took them far beyond everyday experience into the hinterlands of the bizarre. Everybody wants to be accepted.

"Wigstock" is basically a big outdoor production of your average drag show. There are moments that are fun, and people who are smart or engaging, and the obligatory reaction shots of the cheerful audience, but there's none of the documentary skill and insight that went into a film like Jennie Livingston's "Paris Is Burning" (1991), a documentary that gave us a sense of the drag life as a self-contained universe with drama, sorrow and anger, as well as the good times. This movie puts a safe, public face on people who surely cannot be as conventional as they appear here. 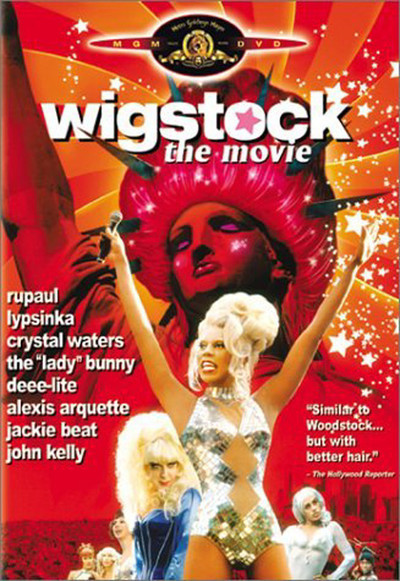