"Who's Driving Doug" has more than an absent question mark in its title to worry about. Doubling as both a debut for director David Michael Conley and the first lead performance by YouTube star Ray William Johnson, the film about two unlikely friends (one with Muscular Dystrophy) is amateurish across the board. Too shallow to project real charisma, the film is instead questionably sincere from start to finish, as if it's trying to head off questions about why the filmmakers wanted to tell this particular story, especially from the grossly underrepresented but often-manipulated perspective of a person with disabilities.

The film aspires to be a heartfelt drama/comedy about an introverted, wheelchair-using college student with Muscular Dystrophy (RJ Mitte's titular character) who finds an unlikely opposite in his driver, Scott (Ray William Johnson), whose joking nature hides the fact that he, too, has sadness in his life. Michael Carlock's script  sends the two on a spontaneous, cliche road trip to Las Vegas (with Doug's friend Stephanie, whose dialogue and agency extends to saying "This is awesome." Scott tries to coax Doug from his shell (inspiring the script's cringe-inducing bookend of Doug writing a personal essay about turtles) by taking him gambling and getting him to lose his virginity to a prostitute. As the two grow closer through a set of twists, "Who's Driving Doug" takes the exact trajectory one might expect.

The movie fails to create a full character out of Doug beyond his disability and general social awkwardness. Mitte's broad performance matches filmmaking that paints a muddy picture of the hero's specific disability. A respiratory machine is treated as important in one scene, but is apparently not needed for the road trip. The same goes with any standards of required care-giving, making Scott's out-of-nowhere hiring as a driver (he saw a flyer outside of Doug's college) feel like an ugly contrivance. As if to prove it's not a typical drama about a disabled character, the film goes out of its way to argue that Doug just wants to be treated as "normal," even though Scott thinks the concept is impossible. But "Who's Driving Doug" undercuts this ambition by defining Mitte's character mostly by his Muscular Dystrophy, without giving us enough information to see him as a fleshed-out human being.

"Who's Driving Doug" gives further credence to the idea that problematic films are often built from a foundation of creative laziness. As Scott, Johnson has a contagious discomfort whether he's stumbling through smug zingers (telling quadriplegic jokes, nicknaming Doug "Rollercop") or hollow dramatic centerpieces. Considering the material he's been given, who can blame him? The character is always on his cell phone: talking on it, texting with it, dramatically tossing it across the bathroom. Neither mask that Scott wears conjures any sympathy by the time of his unintentionally laugh-out-loud grand finale, which will at least make for a strong conclusion to a fake YouTube trailer when his performance is chopped up to make him a cheesy villain in Doug's story.

The film manages to cram into one screenplay a nagging matriarch (Doug's mother, played by Daphne Zuniga), a sexually gullible and then slut-shamed coed (Stephanie) and a prostitute with a heart of gold (Shanti Lowry's Elation). A development later in the movie about homosexuality and death is horrifically misguided. The filmmaking is functional but lacks any vision. It's the kind of movie that dissolves from a close-up of a water bottle to Doug's thoughts of a swimming pool.

Mitte has mild cerebral palsy himself, and has some similar difficulty with the side of his face, although he's not confined to a wheelchair. He states in a recent Metro US interview that CP is not the same (yes), but unfortunately also mentions that he knows nothing about Muscular Dystrophy (yikes) despite accepting a role playing a character with that condition. The inspiration for "Who's Driving Doug" seems to come part from its screenwriter Michael Carnick, who is described on his own website as a comedy writer "with a rare disorder that confine[s] him to a wheelchair," who "focuses on the human experiences of being a minority." It's refreshing to have such perspectives in both behind and in front of the camera, but a film with such low creative standards should not be counted as a victory, but as a loss for all involved. 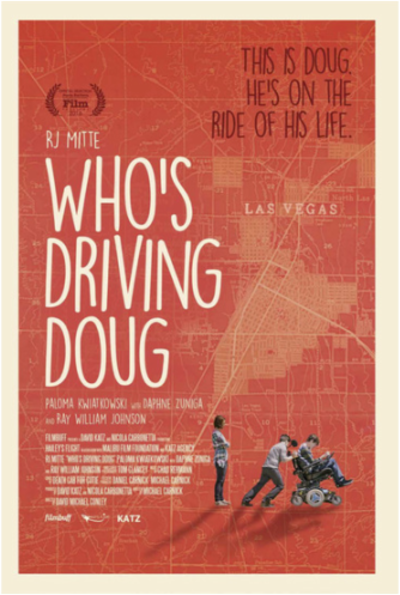