One of the things that makes "Saturday Night Live" funny is that it's on television, so we're supposed to be slightly scandalized by its irreverence. It takes on sex, religion and politics, subjects that were out of bounds during TV's early years, and so cloaks itself in a fashionable daring. We laugh at some of the stuff not so much because it's funny as because it's on TV at all.

Proof of this is a very bad new comedy named "Wholly Moses!" which is the first feature film by "Saturday Night" director Gary Weis. The movie depends for its effect on the kind of shock value the TV show has, and it seems to he under the impression that that's enough. It kids the Old Testament, it has angels with wings that fall off, its narrator says things like "He sat her upon her ass," and we're expected to laugh.

I didn't. The movie's not funny on its own, and since movie audiences are scarcely going to be shocked by its mild but relentlessly repetitive irreverence, it all boils down to a very old joke. The screenplay is third-rate college humor, a "satire" that doesn't dare really satirize its alleged source, a newly discovered Dead Sea scroll, since the audience might not have heard of the Dead Sea scrolls, and so tries for laughs instead with one of the oldest gimmicks in the book: dressing people up in Biblical costume and having them speak in contemporary terms.

To this old wheeze has been added another one, the inspiration of casting all the minor rules with comic actors we'll recognize from other movies. The cast stars Dudley Moore and includes James Coco, Paul Sand, Richard Pryor, Jack Gilford, Dom DeLuise, Madeline Kahn, John Ritter and John Houseman, and it is a commentary on the film that none of them are particularly funny, although the audience did applaud Pryor, out of sympathy, no doubt.

Maybe Weis doesn't know that comic actors, even good ones, are rarely funny in and of themselves. They need characters to play, and they need funny material. "Wholly Moses!" doesn't have it. Example: Madeline Kahn plays an itinerant aphrodisiac peddler. She gives Dudley Moore a lift in her cart, he guzzles some of her patent aphrodisiacs and begins to get fresh, and she pushes him out of the cart. That's it. But the movie finds it necessary to supply two shots of the sign painted on her cart, so we'll remember she sells aphrodisiacs and get the joke. This movie was made either by or for very stupid people, or both.

One measurement of its failure is Dudley Moore's hapless performance in the lead. Moore is a very funny actor, something he has proven not only in his big hit comedy "10" but also in thousands of stage appearances with his sometime sidekick Peter Cook, and in a wonderful but half-forgotten 1968 comedy named "Bedazzled." Here he's totally at a loss.

The movie is told in flashback, and he plays both a tourist who stumbles across some hitherto undiscovered Dead Sea scrolls, and the hero of the scrolls. The scrolls are about Hershel, a baby boy whose tiny boat of rushes was floated onto the Nile at the same time as Moses', but who had the misfortune to be just a little bit further upstream all of his life. Moses gets the glory, and Hershel forever finds himself trying to put out the fire in the burning bush. If the idea here sounds familiar, maybe that's because it's parallel to Monty Python's more accomplished (and more successfully shocking) "Life of Brian."

Moore marches manfully through the script, but the movie sabotages all the performances with a sound track that sounds phoned in from the bottom of a well, and with editing so inept that Moore's big scene with Pryor has backgrounds that don't match from shot to shot. Nor are Pryor and Moore in the same shot for most of the scene, which looks as if Pryor was encouraged to do his schtick and then reaction shots of Moore were edited in afterward. The whole movie's like that: It feels like a series of "guest star" cameo appearances on a TV show we wouldn't want to see in the first place. 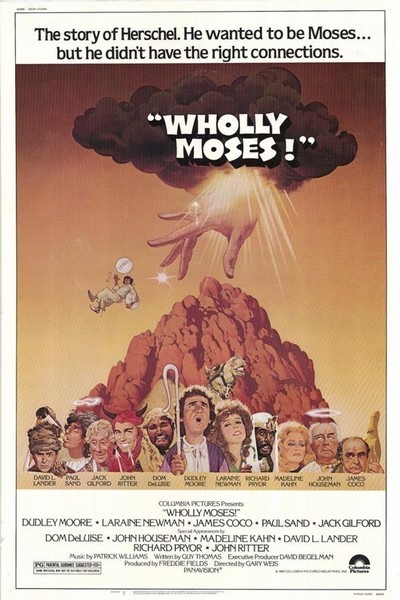