There’s a significant difference in quality between the mediocre scenario (and dialogue) and thrilling production design (and direction) in “White Snake,” the new Chinese animated fairy tale about a shape-changing demon snake who falls in love with a romantic human demon-hunter. The movie’s uneven quality is especially disappointing given the timing of its American theatrical release: five months after “Ne Zha,” a superior Chinese animated fantasy, made a noticeable dent in the global box office (“White Snake” was released in mainland China this past January).

The biggest difference between “White Snake” and “Ne Zha”—two fables about accepting yourself for who you are rather than who you’re expected to be—is that “Ne Zha” is thrillingly imaginative while “White Snake” is only really exciting when its humanoid or anthropomorphized characters (including a talking dog) are eclipsed by their vividly rendered mountain valley environment (mist, waterfalls, foliage, etc.). Both movies are visually arresting, but also generally hamstrung by their Misunderstood Outcast Hero Conquers Their Seemingly Inevitable Destiny stock plots. Still, only one of these two cartoons is more weird and well-designed than its more familiar elements. Unfortunately, “White Snake” is not it.

Based on the famous Chinese fairy tale, “White Snake” opens with a genuinely dreamy nightmare: Blanca (Zhe Zhang), a white-scaled/skinned human-snake demon, imagines that she, while on the verge of achieving immortality, is physically restrained by a cluster of mysterious tendrils that appear suddenly and without explanation. This is a recurring dream for Blanca, and one of a handful of distinguishing characteristics (that are ultimately not followed through on).

Instead, we watch as Blanca goes through the motions of a contrived action-romance story involving: battle-induced amnesia (she’s knocked out after an anticlimactic battle with Yaohan Zhang’s “Dark General,” an evil wizard!); a concerned but selfish older sister named Verta (Xiaoxi Tang); and a manipulative sorceress (Xiaopu Zheng) who tries to take advantage of Blanca’s confusion (she’ll give you what you want, but at a cost!). Blanca’s basically the Chinese version of a Disney princess, only she’s not as sympathetic nor as compelling as those bar-setting American heroines.

Blanca also doesn’t have an especially compelling love interest since loverboy Xuan Ah (Tianxiang Yang) is too selfless and dewy-eyed to be recognizably human. Xuan is an outsider in his own hometown of Snakecatcher Village, because he doesn’t like collecting the snakes that his neighbors use to pay the Dark General’s unreasonable, uh, snake tax (long story short: the General steals the snakes’ energy to become a more powerful magician). Xuan also sings and plays with his goofy dog Duduo (He Zhang).

And that’s pretty much it for Xuan. His facial features aren’t especially memorable, nor is his singing that distinct. Duduo’s ok, though, and Xuan is devoted to Blanca, so that keeps things moving along. Even if Zhang and Yang’s characters don’t have much chemistry, nor is Blanca and Xuan’s romance sensible beyond a basic understanding of what needs to happen next in “White Snake” for the sake of setting up the next canned plot point. (Oh, now they’re in love! Now they’re fighting each other! They’re in love again and fighting together! Oops, there’s some tragic consequences to their actions! Now there’s a silver lining to that dark plot-shaped cloud! And the movie’s over!)

Honestly, I wanted to like “White Snake,” but couldn’t get over the feeling that I was marking time between set pieces. I knew exactly who everybody was, and what they represented to each other, but never felt like I needed to see what Blanca and Xuan would do next to avoid being caught in the middle of yet another prejudice-fueled power struggle, this one between the Dark General and the snake/demon people, led by the Snake Master (Wei Liu).

Even the action scenes are thrilling, but inessential. Which is annoying since those action scenes are the best things in “White Snake” given their fluid camerawork, dynamic pacing, and exciting choreography. I just don’t think that’s saying much given how little I cared about the characters and their world outside of these show-stopping moments.

Thankfully, there are a number of beautiful landscape shots, where a legion of animators get to speak louder than the on-screen characters do, and layers of color and texture make you want to take a moment to stare at the burnt oranges, carnation reds, and forest browns that define, sigh, Snakecatcher Village. Too bad a beautifully designed movie isn’t necessarily good or even novel. I kept wishing “White Snake” would do something that would make inevitable comparisons with “Ne Zha” seem less cruel, or superfluous. But there’s not enough on-screen to make this listless time-waster worth recommending. 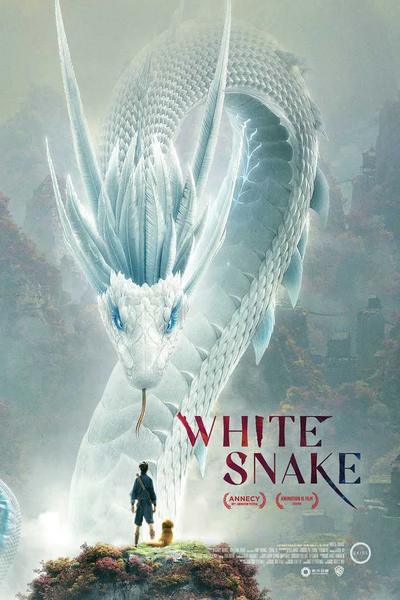