When Comedy Went to School

Understand that as a youth I watched "The Ed Sullivan Show" as much for the comedians as the rock bands, that I have seen "Catskills on Broadway"—twice—and while on a business trip to Las Vegas years ago I opted to see Allen & Rossi at Bob Stupak's' Vegas World ($1 plus two-drink minimum) instead of joining colleagues at the Palomino gentlemen's club (Big Ass Bucket O' Booze package: $555, gratuity not included).

So it pains me to report that Ron Frank and Melvut Akkaya's "When Comedy Went to School," a documentary about Catskills resort comedians and the comedy laboratory known as the Borsht Belt, does not quite make the grade. For every great joke, hilarious anecdote, and keen insight, there are cringe-worthy dramatizations, narrative groaners and (you'll pardon the expression) ham-handed renditions of "Make 'em Laugh" (and there is plenty of hoke here) and "Send in the Clowns," which bookend the film.

But glancing as it is, "When Comedy Went to School" does provide a tantalizing glimpse at this vanished era of Jewish life and American comedy, where future legends earned their comedy bones. "In those days," says Jerry Lewis, one of the Catskills veterans on hand, "comics had someplace to be bad."

That place was Sullivan and Ulster counties in upstate New York, for half a century the largest resort area in the country with 500 hotels, countless bungalow colonies and rooming houses, a mecca for millions of Jewish tourists whose presence might not be welcome elsewhere. "It was an Oz without the wicked witch," (just one of those groaners in Lawrence Richards' script), observes narrator Robert Klein, who as a youth worked there as a busboy and observed the comedians at work.

From the 1930s to the late 1960s, the Catskills was the setting "for the most important, fascinating era in American humor," the film (perhaps over-reaching) contends. "It was the breeding ground for the stand-up comic," proclaims Larry King, another former Catskills busboy, who, off-topic, relates how he lost his virginity with a married woman on a Catskills baseball diamond.

For the entertainers, the Catskills was a comedy boot camp. Performing a show daily for picky audiences, Mason states, comedians had to be improvisational and creative.

Alas, most are represented primarily by film and TV show clips and talk show appearances whose tenuous connection to the Catskills is that the comedian once performed there.

The lack of actual Catskills performance footage no doubt put the filmmakers at a disadvantage, as does the absence of some of the Catskills' most illustrious graduates. No disrespect to Jackie Mason, Mort Sahl and Jerry Stiller, icons all, but the absence of A-listers such as Brooks, Crystal, Seinfeld and Rivers sharing how they developed their craft on the Catskills stages is keenly felt.

"School" veers all over the map in endeavoring to fill in the gaps. One minute it's about the comedians, the next it's about the Catskills guest experience, the next about the Jewish immigrant experience and Jewish theatre, and the next about indefatigable Jewish humor itself ("The virtue of the Jewish people in comedy is that they can always find the joke," Mort Sahl observes. "The people are up in front of the German firing squad and one of the guys says, "Long live the Jewish homeland,' and the other guy says, 'Shh, don't make trouble.'"). At one point, Hugh Hefner is given props for his role in giving a platform to the likes of rebel comedians Dick Gregory and Lenny Bruce (who, the film notes in perhaps its most intriguing tidbit, was a Catskills roommate with Buddy Hackett).

Me, I could have used more of such audience-tested zingers as the classic joke delivered here by Dick Dupree about the waiter who approaches two Jewish women diners to ask, "Is anything all right?" 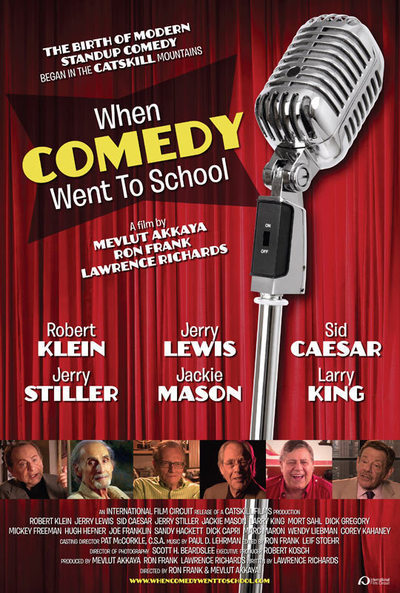