What We Did On Our Holiday

This movie opens with a clearly on-less-than-great-terms couple of parents trying to corral their kids into a car. Dad Doug (David Tennant) is negotiating with his youngest girl, the adorable and strange Jess (Harriet Turnbull) about the “friends” she can bring with her; one of them, it seems, is a brick. “Her best friends are stones now?” Doug indignantly asks estranged wife Abi (Rosamund Pike) shortly after. “Have you spoken to anybody about it?” The ever-exasperated Abi rolls her eyes and shoots back “Who? A geologist?”

Good one, and “What We Did On Our Holiday,” written and directed by Andy Hamilton and Guy Jenkin, is replete with zingers, a quality not to be disdained in a family comedy of miscommunication. Doug and Abi are on the outs, planning to divorce, but reuniting for a weekend to visit Doug’s kin in the Hebrides. Doug’s dad Gordie (Billy Connolly) is an ex football star whose latest birthday will probably be his last. As Gordie eventually explains to Abi and Doug’s oldest child, the curious and analytical tween Lottie (Emilia Jones): “You’ve heard of cancer? Well I’ve got that.” Doug and Abi are determined to keep up appearances not just for Gordie but the children’s sake. But of course the three children (the middle one is a cheekily ingenuous boy, Mickey, played by Bobby Smallridge) see right through their ever-feuding parents’ lies. Doug and Ari’s feckless, near-constant deceptions are countered by Gordie’s honesty. The exceptionally warm Connolly does great things with his role as a long-haired patriarch determined to go out of his life his way, despite the efforts of his other son, rich financier and utter twit Gavin (Billy Miller), to stage a white elephant of a party for him.

Once Abi and Doug finally get their brood to Scotland, Gordie absconds to a beach with the three kids, where he sets an example of honesty that they eventually take to a bit of an extreme. “Every human being on this planet is ridiculous in its own way,” Gordie reflects to Lottie, going on to say that the point of life is to love them not just in spite but because of that. The movie is inspired by the BBC sitcom “Outnumbered,” also a Hamilton and Jenkin effort, in which two parents were pitted against three children and a lot of the dialogue was improvised in a “kids say the darnedest things” spirit. “Holiday” does a good job of making the young characters look terrifically spontaneous, and the adult cast is rife with expertise: Pike is both frazzled and dry, while Tennant proves that his wide-eyed intensity works as well as a comic tic as it does when he’s playing an existentially tortured bloke in more serious fare.

The movie’s storyline takes an eccentric turn when the kids decide to honor Gordie’s wish for a “Viking funeral.” While Hamilton and Jenkin provide a lot of gentle moments of poignancy, and the cinematography of the Scottish countryside (shot by Martin Hawkins) goes a long way in selling the movie’s the-simple-pleasures-of-life-are-best philosophy, “Holiday” wisely sticks to its frantic-but-not-grotesque-farce guns throughout its tidy 95 minutes. It wears not just its Britishness but its relative good taste on its sleeve: unlike its U.S. counterparts, there’s nary a poop or fart joke in evidence in this domestic comedy. It’s not what you’d call “major” cinema, but it’s a breezy entertainment, particularly if you’re a fan of one or more of the cast members. 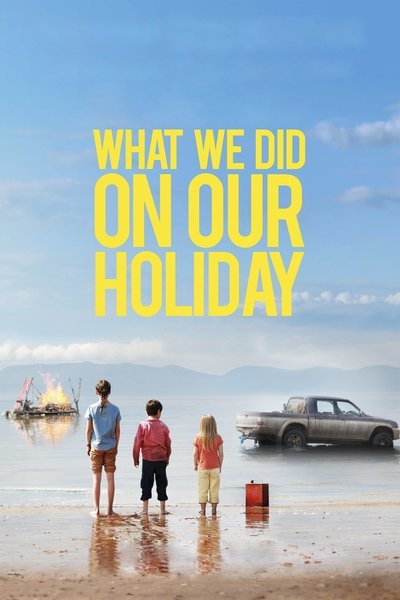 Rated PG-13 for some thematic elements and language