Grim, bleak, and displaying a predominantly muddy color palate—all greens, greys, browns—as well as a nervous breakdown of a score by Robert Pycior, Vincent Grashaw's "What Josiah Saw" is a tough watch. It's often terrifying (Pycior's score gave me more than one jolt), and provocative, taking place in the thick of a family dynamic so sick and twisted there's no way out. All of the doorways are just black squares, leading nowhere. The film features bold gritty performances from Robert Patrick, Nick Stahl, Scott Haze, and Kelli Garner—playing the members of the fractured Graham family, haunted (literally) by the past, and also trapped by it. "What Josiah Saw" unfolds at a stately pace, with scenes dragging out (the fortune teller exchange is an obvious example), the run-time lengthened unnecessarily. The family trauma is so clotted-thick, a faster pace and tightened-up editing might have eradicated the slow-motion underwater feel of the whole.

The isolated Graham family farm lies on the outskirts of a forgotten Texas town, and the only inhabitants left are drunken patriarch Josiah (Parker) and his developmentally-disabled son Thomas (Haze). Two siblings have flown the coop—Eli (Stahl) and Mary (Garner). The Biblical names are a clue to the background noise of the family. Mother Miriam is long dead, and the local sheriff tells the story of her death (it's horrifying) to two visiting oil men, who want to buy the Graham farm for drilling purposes. That's not the only Graham secret. One of the secrets isn't revealed until almost the final moment of the film, although you can probably guess it early on. Josiah spends his days drunk, and Thomas caters to his dad, trying to please him. One scene is so legitimately traumatizing I am almost sorry I watched it. Whatever went down on this gloomy patch of land was bad all the way through. Thomas is convinced his mother haunts the place, wandering the grounds at night. Josiah is convinced Miriam is in Hell, and it is up to the family to save her from hellfire. This is not a workable plan to move forward.

Separated into three discrete chapters, one for each Graham child, "What Josiah Saw" is almost an anthology film, each section distinct in style and mood. None of the Graham kids are doing well. The opening chapter belongs to Thomas. Dominated by his father, traumatized by his entire life history, Thomas can barely get through a moment without bursting into tears. He keeps his dad liquored up and can't sleep at night. Eli is an ex-con (he did time for statutory rape: "I didn't know she was 16"), is under suspicion for kidnapping a nine-year-old girl, and owes money to scary guys who will kill him if he doesn't pay up. Mary, who had a tubal ligation as a young woman (understandable, considering her family), is now pursuing adoption. Her husband (Tony Hale) seems almost afraid of his wife. Mary is not well. No adoption agency in their right mind would approve her application. Eventually, Eli and Mary are drawn back to the family farm, to confront their shared past of degradation and terror.

Cinematographer Carlos Ritter creates the creepy mood: lots of slow camera moves, isolated shots of empty rooms, misty light barely able to make it through the window panes. It gives an eerie sense of emptiness about to be filled by something terrible. The sordidness is sicker than anything dreamt up by Flannery O'Connor. Nick Stahl, in particular, is terrific. I've been a fan since his trembling terrified teenage performance in the unfairly forgotten (and hard to find) "Eye of God." Stahl has been through a lot, and it shows on his face: it's etched with hardship, sensitivity and pain.

"What Josiah Saw" goes down many weird byways. The weirdest comes in Eli's chapter. Desperate to pay his debts, Eli agrees to visit a nearby carnival, run by "gypsies" (referred to as such in the film), who apparently have a stash of "Jew gold" (again, referred to as such), hoarded during the Holocaust. The weirdness here could have been one of those tangents like the "Sister Christian" episode in "Boogie Nights" or any number of the "episodes" in "Pulp Fiction," where the main characters are drawn into side "scenes" peopled with unpredictable characters. But this "gypsy" chapter trucks in every stereotype of the Romani population (they are thieves, they kidnap children, they are dangerous, they believe in curses, etc.). These stereotypes date back centuries, and have been used to sideline them, banish them, or—as the Nazis did—kill them. "What Josiah Saw" includes a couple of actual newsreel clips, one showing the teeth extracted from Jewish people's mouths by the Nazis, and one clip of what looks like a group of Romani approaching a mass grave surrounded by soldiers. Using a clip of people being marched to their deaths, especially in a scene where the characters display the stereotypes used by the Nazis to justify their actions, is indefensible. 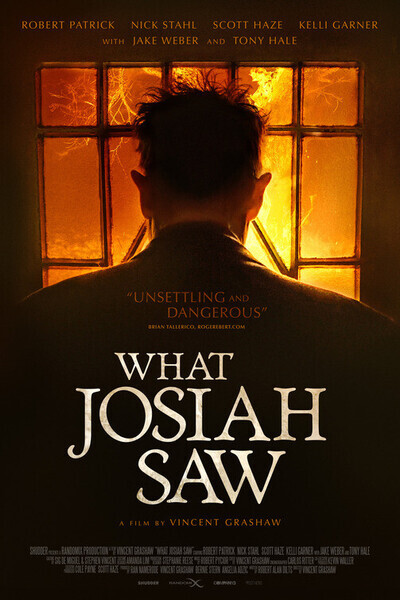