There's a terrific new horror film about guilt, shame, and witches, and its name is "Suspi--" wait, sorry, it's called "Welcome to Mercy," a brooding, atmospheric movie set in a Latvian convent that follows an atheist who becomes possessed by an ancient evil. That may sound like the logline for a tacky throwback to the unabashedly salacious nunsploitation gems of the 1970s, like "Behind Convent Walls" and "School of the Holy Beast." But the best thing about "Welcome to Mercy" is that its creators don't go for cheap thrills ... not many, anyway. Director Tommy Bertelsen and screenwriter Kristen Ruhlin take time to consider what drew disbelieving single mother Madaline (Ruhlin) back to her Latvian home, just to see her long-ill father Frank (Andrey Yahimovich). One answer seems immediately  apparent: to confront her standoffish, estranged mother Alyona (Ieva Seglina). But Bertelsen and Ruhlin are patient enough to make their film's more high concept ideas—surprise: Madaline gets possessed by demons!—subordinate to Madaline's attempts at reconciling abandonment issues that she hopes she won't pass on to her own daughter, Willow (Sophia Massa).

You can tell that there's something different about "Welcome to Mercy" from the way its terrific ensemble cast delivers their oft-pulpy dialogue. These performances are the heart and soul of a film whose ideas could have easily devolved into genre cliches and pseudo-empathetic pandering. "Welcome to Mercy" is, after all, a film where demonic possession is presented as an expression of Madaline's long-unexamined feelings of helplessness. Her secular trauma is given a high-concept horror twist, but with good reason: a world of old world religious/superstitious fear is the one this character was pre-emptively kicked out of, and that she consequently fears.

How can you blame her? Look at the way that Seglina and Juris Strenga, the actor playing the skeletal Father Joseph, play their parts. Their accents and appearances are (necessarily) off-putting: at times, she sounds like Frau Blücher from "Young Frankenstein" while he looks like the evil priest from "Poltergeist II." Still, there's enough humanity in both Seglina and Strenga's performances to make you wonder if Madaline knows what she's talking about when she dismisses both Joseph and Alyona's ritualistic faith as mere superstition. Listen to Strenga—as his character refers to the still-living Frank—add a syrupy pause worthy of Bela Lugosi to the sentence "He was ... a good friend." Or listen to Seglina deliver a master class in inflection as she--as Alyona rejects Madaline's claim that Yelina "abandoned [her]"—delivers a line that, from a lesser actor, would come out on the wrong side of Meryl-Streep-y camp: "I did not! A-ban-don YOU! I wanted to give you a BET-TER life.”

That sort of pitch-perfect heightened tone is, admittedly, the sort of thing you have to see to believe. Still, the creators of "Welcome to Mercy" deserve praise for giving their story enough weight to make some timeworn horror conventions (Look out, stigmata!) seem new again. As a screenwriter, Ruhlin brings sensitivity to her characters in a way that none of the other authors of this season's big horror films did (sorry, fans of this year's "Halloween" sequel!). As a writer, Ruhlin gives Madaline enough time and humanity to worry: maybe she's unconsciously hurting her own daughter because she doesn't understand why or how much her mother hurt her. That lingering should help many jaded horror fans to suspend their disbelief, which is essential since Madaline (the audience's surrogate) must willingly submit to the prodding concern of the sisters of Mercy, a secluded convent whose nuns supposedly have the "spiritual disciplines" needed to help Madaline become unpossessed.

Madaline's dilemma sounds incredible, but it's supposed to, from Seglina and Strenga's Boris & Natasha-style accents to the superstitious, rural trappings of Frank and Yalina's home (so much garlic and hay!). This is how a skeptical urbanite sees the world she was (in her eyes) forced out of as a child. It's small, and a little backwards, so it's also easy to pigeonhole.

Realistically, the most exciting thing about "Welcome to Mercy" isn't its exceptionally creepy scare scenes—ever wonder what the world looks like according to a victim of possession?—but rather its creators' thoughtful consideration, not only of how it feels to be abandoned, but also what it feels like to understand why you were seemingly left behind. "Welcome to Mercy" is, in that sense, a rare horror movie whose creators seriously represent both sides of a dilemma, and is therefore more mature than it seems at first glance. Bertelsen and Ruhlin understand why people fear religion, but also why we look to it as a balm for secular guilt and shame. In horror movies, Love is usually the world's one-size-fits-all cure. In "Welcome to Mercy," it's a more complex sentiment: forgiveness. 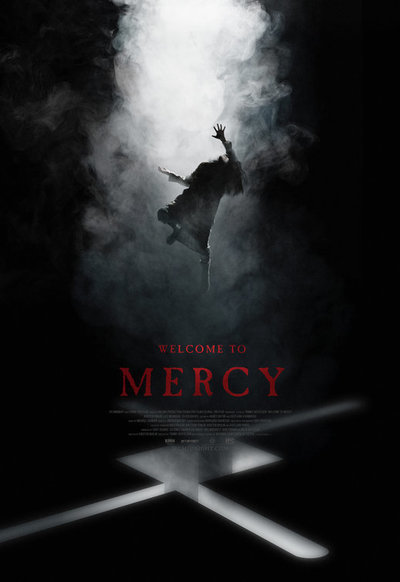