We Need to Do Something

I’m a fan of locked perspective films and “We Need to Do Something” has one of the most effectively contained POVs in a long time. It’s basically the end of the world as seen through the eyes and experiences of one family trapped in their bathroom. Of course, some will read pandemic narratives into that structure, but this would have been an impressive genre exercise pre-2020 and really owes more to Giallo than COVID. Even the crazy twists of this story that don’t quite work impressed me with their ambition in a film that gets incredibly dark and narratively insane.

Based on the Max Booth III novella of the same name (and with a script by the author), “We Need to Do Something” opens with a family taking shelter in their very impressive bathroom during a crazy storm. As their phones burst out tornado warnings, they shelter and wait to see what happens next. Daughter Melissa (Sierra McCormick) is attached to her phone, trying to get in touch with someone important in her life and find out if they’re safe. Son Bobby (John James Cronin) balances out his fear by being in the comforting embrace of his family. Mom Diane (Vinessa Shaw) tries to assuage Bobby’s fears while deflecting passive-aggressive barbs from Dad Robert (Pat Healy). There’s clearly bad blood between the parents. It will get worse.

After a blinding bright light and intense noise outside, Robert tries to open the bathroom door only to find it’s been blocked by a tree that fell into their house. They’re trapped. Being confined in a bathroom with your family and no food or supplies would be bad enough, but things get much worse when it’s revealed that something other than bad weather is happening outside this confined space. It starts with a talking demon dog voiced by Ozzy Osbourne of all people to give you some idea of the downright Satanic situation in which this family finds itself. And the terror is compounded not only by their limited understanding of what’s happening outside their house—which feels very 2020—but the fact that Robert is a pretty weak excuse for a father and a man. Oh, and then there’s a snake.

What I liked the most about “We Need to Do Something” was the sense that I really had no idea what it was going to do next. Horror is often a predictable genre, but O’Grady and Booth often manage to turn left when you expect this movie to go right. They also embed their tone with a darkly comedic undercurrent that reminded me of Sam Raimi’s ‘80s work and other filmmakers who recognized that it’s OK to laugh at extremely disturbing situations. Pat Healy’s work helps manage this tone, turning his father from Hell up to 11 with wide eyes and screaming line delivery. He’s every patriarch who realized only under pressure that he was incapable of handling it.

Despite how much its confined POV works, some will feel that “We Need to Do Something” is ultimately a little slight, and the flashbacks that reveal some details about how these people got here didn’t work for me. However, O’Grady really sticks the landing, closing his film in a way that makes it feel like even more of a perfect Fall 2021 movie. So much of the world thought it was returning to normal in the Spring and Summer only to return to more mandates and precautions. After all, maybe we really don’t want to leave the comfort of the family bathroom. 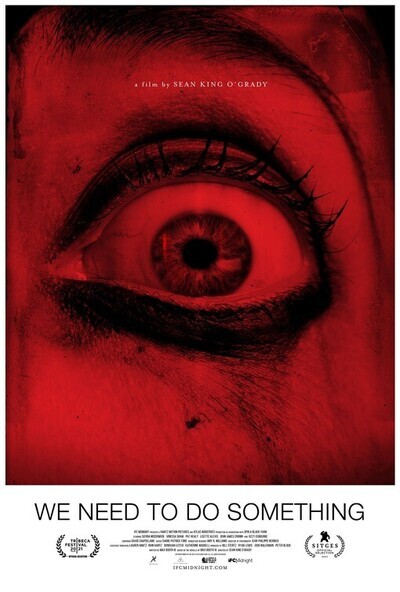