Break ups are never easy, but a break up right before a sibling’s wedding? That’s the pickle the couple finds themselves in Jeff Rosenberg’s romantic dramedy “We Broke Up.” Do they announce their big sad news before the wedding? Or, do they pretend to stay together so not to overshadow the couple getting married? That tension keeps the action volleying from one side to another as both Doug (William Jackson Harper) and Lori (Aya Cash) struggle to figure out what the right move is for them, or even if they’re truly over at all. A longtime couple everyone expected to get married, when Doug finally popped the question, Lori balked in a way that brought up more questions and eventually, Doug called it quits before Lori’s sister’s big summer camp-themed wedding.

While the romantic uncertainty plays out, the movie has the ridiculous set-up of this strange themed wedding to lean on for jokes. Rosenberg, who co-wrote the script with Laura Jacqmin, digs deep into summer camp lore, giving the sisters many memories to reminiscence over. The film returns to the spot where the sisters enjoyed so many adolescent hijinks and re-imagines the place as a fancy resort with some old school amenities still intact, like cabins, but noticeably better pools and outdoor evening seating than your typical sleepaway camp. But to really get in the old camp spirit, the soon-to-be-wed couple Bea (Sarah Bolger) and Jayson (Tony Cavalero), insist their wedding party play the Paul Bunyan games, a series of drinking and skills competitions (in that order) that inadvertently bring out Lori and Doug’s wounded feelings. Not wanting to be outdone by the other, they throw themselves into the boozy fray. On the sidelines, mom Adelaide (Peri Gilpin) expresses some doubt about Bea’s decision to marry Jayson after only a month, adding yet another stick into the fire.

Even though their characters may play on opposing teams, Cash and Jackson Harper’s performances are united in their doubts and feelings for each other. At different points in the movie, the injured party changes. Sometimes it’s Doug who walks away in anger. Other times, it’s Lori who has the downcast, hurt expression on her face. It’s a volatile dynamic, even if sometimes it feels as if things unnaturally escalate too quickly. "We Broke Up" holds onto a sliver of hope that the title will not come to ultimately pass, leaving a slight tinge of suspense of whether they will or won’t make it. Bolger and Cavalero’s characters have their own issues, but they’re the chaotic good spirits trying to make sure everyone is as happy as they are. They seem too bubbly and cheerfully talking nonsense, creating quite the dichotomy between the two couples.

Both Rosenberg and Jackson Harper have the TV show “The Good Place” in common, where Rosenberg worked as an assistant director for a number of episodes and Jackson Harper was one of the series’ stars. It seems like the collaboration has benefitted “We Broke Up” in other ways as well. The movie has a measured sense of balancing existential questions like “What are we doing? What are we?” questions with some fairly silly scenarios. There’s space for anger and betrayal as well as a bride with a burgeoning scrunchie business. It strikes a subtle symmetry with its competing stories and emotions.

Although the relationship at the heart of “We Broke Up” may be messy and complicated, Rosenberg ties all of the story’s elements together into a neat, bittersweet package. With cinematography by Andrew Aiello and production design by Amelia Steely, the movie really hones in on the upscale, semi-rustic wedding and the characters that either come alive in this environment or those that feel out-of-place in it. Relationships may not always be bliss, but “We Broke Up” is also a reminder that it’s worth salvaging the good moments from the wreckage.

Now playing in select theaters and available on VOD on April 23. 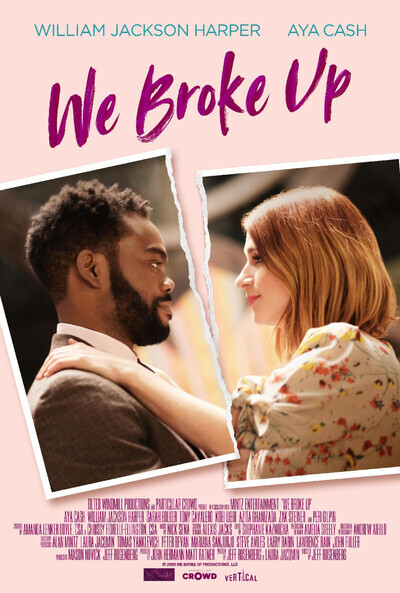