We Are as Gods

The Whole Earth Catalog, a broad-scope multi-disciplinarian magazine published between 1968 and 1972, opened with words from founder Stewart Brand: "We are as gods so we might as well get good at it." This hubristic statement, so common in "visionary" types, particularly those who emerged from the "counterculture," could sum up Stewart Brand (if he can be summed up). The statement reveals two things simultaneously: there is a laudable sense of responsibility for humanity and the planet (we are not along for the ride, but in the driver's seat), and a high-flung messianic self-centeredness. Brand's "brand" is a turn-on to some (to co-opt '60s vocabulary), and a huge turn-off to others not so susceptible (scientists, environmentalists, etc.) to its pitch.

"We Are as Gods," co-directed by David Alvarado and Jason Sussberg, is a portrait of this highly controversial figure, controversial from the start, but even more so now with his spearheading of the De-extinction Movement. Could "bringing back" the woolly mammoth help halt climate change? Brand makes his case. It's hard not to call forth "Jurassic Park" as the ultimate cautionary tale. "We Are as Gods" takes us through Brand's life trajectory (he is still going strong at 83) and details his efforts to reverse the process of extinction. To the film's credit, even with the participation of Brand, "We Are as Gods" allows the opposing sides space to voice their complaints. It does not shy away from the controversy, although, in the end, it does present Brand as a pioneering inspirational figure, a far-seer and free-thinker. What you decide to think is up to you.

In the opening sequence, Brand is described by various colleagues and critics as "P.T. Barnum," "Johnny Appleseed," "Zelig," "Da Vinci," "Forrest Gump," and Kilroy. Very few of these are unambiguous compliments. "Zelig" and "Forrest Gump" refer to his ability to be in the right place at the right time—although an argument is made that Brand is actually in the right place right before the right time. He arrives on a burgeoning "scene," looks around, gives it a name, which then coalesces the "scene" into a "movement." He's done this multiple times. Brand went to Stanford to study ecology and evolution, studied with "doomsayer" Paul Ehrlich, and got interested in the tragedies of extinction, particularly more recent extinctions like the American chestnut tree and the passenger pigeon, both of which went extinct in a 30-year period due to deforestation, hunting, destroyed eco-systems, etc. Brand's time at Stanford was just a blip compared to the rest of his life. Before you knew it, he moved to Haight-Ashbury, hooked up with Ken Kesey and the "Merry Pranksters"; he wore top hats, did LSD in copious amounts, hosted Acid Test parties featuring the Grateful Dead, and lived in a van with his wife, Lois Jennings, a mathematician and member of the Ottawa tribe (she is interviewed for the film).

After the Merry Pranksters era, he badgered NASA and other space programs around the world to release a photograph of the earth from space. He thought it would help give humans a better sense of stewardship. Finally, the famous photo arrived. We all know the photo. In a current interview, Brand says, "It was a hopeful image, and it blew away the mushroom cloud." "We Are as Gods" posits that the earth photo, and Brand's promotion of it, launched the environmentalist movement. There are several such debatable claims made in "We Are as Gods." The Whole Earth Catalog made Brand famous. (Another claim made is that Whole Earth Catalog was the birth of "startup culture." You don't have to do too much digging to find a handful of examples to dispute this claim.) However, the Whole Earth Catalog was a huge influence on Steve Jobs and Steve Wozniak. Brand's involvement in the early days of the personal computer revolution, which he wrote about for Rolling Stone, does give some legitimacy to the idea that there is a straight line between Whole Earth Catalog and Apple Computers.

The scaffolding of all this information is Stewart Brand's current attempts to "bring back the woolly mammoth" using DNA mapping and collaborating with Russian ecologists and preservationists at Pleistocene Park in Siberia, men and women who have watched the permafrost become, as one says, "not so perma and not so frost." The idea is to re-introduce grazing mammals to the area (a process already begun), which will restore the ecosystem and hold off the dangerous thawing. Key to all of this would be the woolly mammoth. While it all sounds like science-fiction, it's not sci-fi at all. It's happening.

"We Are as Gods" does tilt in favor towards Brand's point of view. He is the center, and he is presented quite sympathetically. What matters, though, is the film's presentation of the ethical concerns surrounding Brand's de-extinction work. This creates space for audience members to think out the issues, many of which are at play. Brand emerged from the hippie '60s—a movement that was anti-technology—and fell in love with technology. His belief that technology could save us alienated him from the early environmentalist movement and pushed him towards Silicon Valley (not an uncommon path). A scientist accused Brand of having "amnesia," in regard to the dangers of technology. Technology has done a lot of good, of course. But there are libraries full of examples to the contrary, and we live in a social media algorithm-driven world that puts the lie to Brand's idea that technology is "neutral." Brand's choices have been disheartening to the environmentalists who started out with him, people like environmentalist Hunter Lovins, interviewed for the film. Brand is now devoted to what he calls "assisted evolution", i.e. bioengineering, genetic modification/engineering. Lovins declares, "This is not environmentalism."

Peter Coyote is an interesting interview subject. He was part of the 1960s Haight scene, and knew Brand, through all of those Acid Test concerts and parties. Recently, he was in the audience at an event where a panel, including Brand, argued about de-extinction. Coyote stood up and let Brand have it: Brand's experiments would bring forth "disastrous unintended consequences," and Brand's perspective was "sociopathic" due to its "absence of doubt." Coyote ended with "We are not Gods. We are idiot savants." Even the unflappable Brand seemed taken aback.

"We Are as Gods" has a fairly typical format (although the score by Brian Eno, a Brand supporter, is a plus). Brand's ideas are compelling, although when people accuse him of "naivete" they're not wrong. Optimists, of course, serve an important purpose: we need people who dream big, think outside the box, embody hope for the future with their big ideas. But pessimists serve a purpose too. Pessimists are the ones who look around at all the enthusiasm and say, "Maybe we need to pump the brakes and discuss the implications." Pessimists are often punished by optimists, shunned, side-lined, or what we could call "de-platformed."

Brand's optimism is undeniably attractive, but we need people like Peter Coyote and Hunter Lovins too. Critical thinking must not be sidelined. "We Are as Gods" works best as a history lesson as seen through one man's journey: from Haight-Ashbury bacchanals to early computer labs to the Siberian steppe. Hunter Lovins gets excited at the thought of actually seeing a woolly mammoth in the flesh one day, swept away by the fantasy of it. But then her cooler head re-asserts itself, and she asks, "Should we do this, though?" This was Jeff Goldblum's question in "Jurassic Park." It's still a good one. 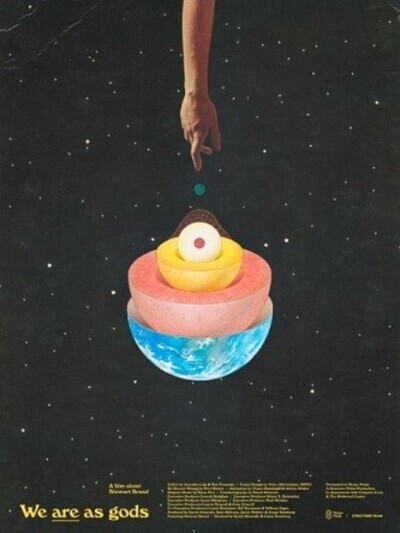 Stewart Brand as Self

Brian Eno as Self