The new Bollywood action-adventure “War” is probably only for fans of marquee-topping actors Hrithik Roshan and Tiger Shroff, the former of whom stars in the goony but likable superhero series “Krrish” and the latter of whom will star in an upcoming, officially licensed Indian Rambo remake. Stylistically, “War” is Maximum Masala, and maybe features more tonal shifts and berserk plot twists and convolutions than even established Indian film buffs can handle.

“War” features: a couple of good-enough musical numbers; “Top Gun”-levels of homoeroticism, intended or otherwise; way too much who-is-the-mole intrigue; a superfluous romantic sub-plot that dove-tails with a random Christmas scene involving a cute widdle kid; an entertaining motorcycle chase where the two dueling stars link arms and spin around like computer-graphics-enhanced dervishes; an endearingly sappy plot tangent involving the mother of Shroff’s character; and a show-stopping church-set hammer fight that follows a sports-car chase across a frozen river. Many muscle shirts, computer-graphics artists, and wind machines were put to great and terrible use on this movie. Thankfully, established Desi/Bollywood fans may find that “War” rewards more than it tests their patience (barely, but still).

Roshan and Shroff play Kabir and Khalid, respectively, two smoldering Indian anti-terrorist spies who are out to nab evil international arms dealer/terrorist Rizwan Ilyasi (Sanjeev Vasta), who looks weirdly like Geoffrey Rush cosplaying as Fran Leibowitz, dressed as he in red circular-framed glasses, cream-colored khakis, and white pinstriped jacket. But before Kabir and Khalid set off to catch Vasta’s flamboyant-looking, but barely-developed baddie, the two leads take a while to size each other up. Which makes sense since “War” is basically structured like a bonkers “Marvel Team-Up” jam session, only starring two of Bollywood’s biggest contemporary stars instead of Spider-Man and Ben Grimm.

Kabir doesn’t want to work with Khalid, not even after a (genuinely fun) establishing action scene where Khalid disarms a room full of drug-dealers in what looks like one long take. A pair of sudsy reasons are given for Kabir’s on sight enmity—Khalid’s dad betrayed his country! Also: Khalid has bad peripheral vision!—but these are obviously just excuses to get Roshan and Shroff to give each other sexy looks, declare their love for India, and dance together (it’s an okay dance number, mind you, but both stars have done better).

The same is basically true about, oh, all of the immaterial plot. Two handsome leading men, both of whom amass bloody scars across their chiseled cheek bones and jawlines, must work together despite their mutual fear of betrayal. Never mind Kabir’s hetero-romantic sub-plot with single mom Naina (Vaani Kapoor), a civilian asset who becomes reluctantly involved with Kabir’s plan to catch Ilyasi; Kabir and Naina’s romance is tellingly only emphasized at the start of the film’s post-intermission second half. “War” frequently promises and sometimes delivers a series of over-the-top confrontations between Roshan and Shroff, the latter of whom goes to weird lengths to make Roshan seem like the sturdier of the two stars (Shroff pouts a lot, is all I’ll say).

Fans of Roshan and Shroff will probably flock to “War” for a handful of fun, gonzo set pieces that are immodestly dispersed throughout a litany of densely over-written, meagerly thought-through dialogue scenes. Both types of scenes can be fun. I’m rather partial to a later scene where Kabir retro-actively explains, through a series of flashbacks, the underlying method to his investigation’s maddening trajectory. So while the “four invisible chess pieces” metaphor that Kabir uses to both explain and applaud himself is gibberish, the montage that’s used to illustrate Kabir’s insane plan is as dynamic and goofy as the explanatory kicker at the end of a satisfyingly pulpy whodunit. If you’re going to “War,” you should probably go expecting some high-toned nonsense.

“War” works best when it’s a Michael Bay-goes-Bollywood take on the “Mission: Impossible” films. What makes this a dicey proposition (for some): there’s a lot more “Mission: Impossible II”—and the “Heroic Bloodshed” spirit of John Woo, that sequel’s director—in this movie than I suspect many readers will care for. An out-of-left field bungee-jumping scene ends with one hero nervously walking away from oncoming cops after the other guy swings around a bridge and swan-dives into the water below. This scene is nutty, and not altogether well-made, but its creators’ dedication to flamboyant excess will be appreciated by fans.

My only warning for those who are interested in “War”: don’t go in expecting a smooth ride. There’s too much narrative padding and only some of it is the good kind of silly. There have been crazier Indian action movies this year (“Saaho” being the most recent) and more effective spy-thrillers, too (“India’s Most Wanted,” of all things). But “War” is satisfying for what it is: a star vehicle that’s too weird to be dismissed, and too plodding to completely work. 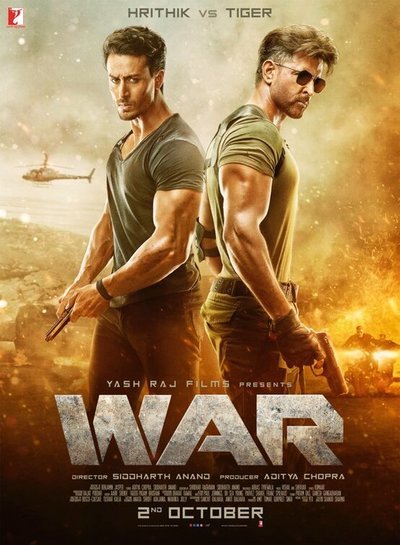