It’s probable that a lot of documentary filmmakers would consider director Andrey Paounov’s task here an enviable one. Around 2013 Christo, a long-time master of large-scale installation art—in which he constructs, or inserts onto/into natural settings, foreign objects to create unique interactive experiences—embarked on his first project without his wife and partner Jeanne-Claude.

“The Floating Piers” was a piece they’d conceived in 1970; the idea was to construct, from polyethylene cubes, water walkways of unusual length, which would then be covered in fabric. Lake Isea in Italy (which was chosen as a location after considerations of Tokyo Bay and the Rio de la Plata between Argentina and Uruguay) has the island of San Paolo, and the walkway from the shoreline led to that. Because of the materials involved, the experience contained buoyancy; because the temporary piers had no railings, the experience also contained potential danger.

And there’s the rub, and there’s also why Paounov’s assignment isn’t as enviable as it might seem. Christo and Jeanne-Claude had the great and pioneering documentarians Albert and David Maysles as their chroniclers, leading to five films about the artists and their landmark pieces, between 1974’s “Christo’s Valley Curtain” and 2006’s "The Gates." Paounov’s got a lot to live up to here.

Unfortunately, he does not seem to aspire to the Maysles’ level of engagement. In 2006’s “The Gates,” for instance (which Albert Maysles made with Antonio Ferrera, as David Maysles had died in the late ‘80s), the filmmakers found enormous drama in the negotiations/battles between artists and New York City’s bureaucrats, concerning miles of fabric gates snaked through Central Park. In this film, Paounov checks into a meeting with Italian officials and registers not much more than boredom before cutting away.

There are little bits that are intended to amuse, such as a public appearance at which one of the artist’s assistants tells an organizer, “Christo does not sit,” and a disarming scene in which the non-sitting artist lays out his conception to a group of receptive schoolchildren. The construction of the actual piece is of interest, as is the installation’s opening. The site is, predictably enough, practically overrun by visitors. This compromises the intended effect and increases liability. A solution is reached, but the depiction of this, too, leaves the viewer a little short.

What the viewer is not left short of is a whole lot of yelling and cursing in various languages as Christo’s collaborators and helpmates confront practically each and every crisis in a truculent panic. Art isn’t easy, we all know that. But does it also have to be this crazy? 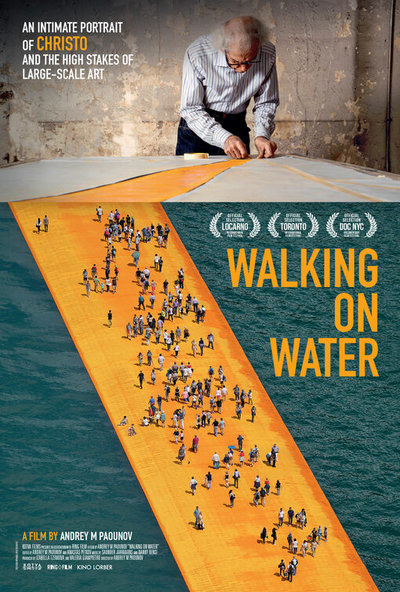