“Walkaway Joe” shares its title with the classic, 1992 Trisha Yearwood tune about a mother warning her daughter to stay away from the charming but dangerous young man who’s stolen her heart. (The video features a baby-faced Matthew McConaughey as the titular bad boy, in case you’re curious.) But the song accomplishes more in about four minutes than Tom Wright’s film does in the entirety of its running time in terms of telling a story with vivid characters and believable motivations.

Typically reliable actors like David Strathairn and Jeffrey Dean Morgan can only do so much when they’re given so little to work with on the page. Wright, making his feature directing debut, is stuck with thinly drawn types in cliched situations in the script from Michael Milillo. This is an overly familiar story of fathers and sons, of cycles of abandonment and years of pent-up resentments, without any fresh insight. And the parallels and coincidences that bind its characters feel too tidy and contrived.

Much of the problem lies with the young man who connects the two ne’er-do-wells who ultimately shape him on his coming-of-age journey. Julian Feder stars as Dallas McCarthy, a 14-year-old pool shark in the tradition of his hustler father, the swaggering Cal (Morgan). Dallas is shrill and surly until nearly the very end of the film, and not in a way that’s even remotely interesting. Feder has trouble finding complexity within the character and is routinely outmatched by his veteran co-stars. At the film’s start, though, he’s a key component of his dad’s tried-and-true method of scamming chumps out of wads of cash at dive bars across southern Louisiana. Never mind that Dallas is still young enough to have stickers on his headboard in the bedroom of his working-class family’s cramped house; he’s learning the street smarts his dad thinks are essential and making money along the way.

“Did it ever occur to you to be his parent instead of his playmate?” Dallas’ annoyed mother (Julie Ann Amery) asks, spelling out what should be evident. But in no time, Cal bails entirely, prompting Dallas to run away from home and search for him in pool halls throughout the bayou. Along the way, he meets up with Strathairn’s character, whose name is—you guessed it—Joe, and who has walked away from his own family. Joe is old-fashioned and quirky (he lives in an RV and doesn’t own a cell phone!) and he has sad, kind eyes, and for extremely obvious reasons he agrees to take Dallas in and help him find Cal. Joe has his own paternal issues with both his own father and his own son, making the symbolism of him helping this wayward kid entirely too convenient.

Dallas is too ungrateful to appreciate Joe’s generosity and clearly has many Lessons to Learn; however, he’s so singularly unpleasant and annoying that it’s hard to become invested in whether he evolves and finds purpose. Nevertheless, he and his dad are inevitably headed toward a collision in The Big Game, which in this case is a high-dollar billiards tournament. Despite the formula at work here, Wright stages and shoots the showdown without much suspense or pizzazz. Similarly, he depicts New Orleans—one of the most vibrant and richly cultural cities in America—in bafflingly blah fashion.

Strathairn achieves some gentle, intimate moments of emotion, even though the occasion of his most effective scene—Joe’s son’s wedding—feels like a contrivance. “Walkaway Joe” aims to explore weighty, moving themes of legacy and destiny, of not letting your past dictate your future. But in doing so through this grungy tale of shady hustlers, the stakes feel awfully small. 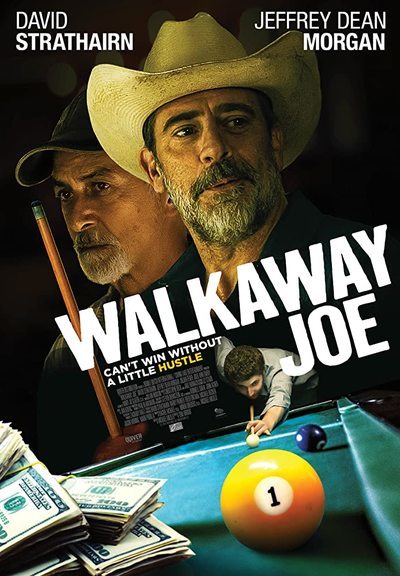