"Waiting for Anya" begins with a helpful explanation of what was going on in 1942, the first indicator that the target audience may be those who have not yet learned some basic history about WWII. It is not the last. The film is based on a popular YA book by Michael Morpurgo, author of The War Horse, and it is inspired by French villagers who rescued Jewish children from the Nazis by smuggling them over the mountains into Spain. Despite the obvious sincerity of the filmmakers, the best efforts of Jean Reno and Anjelica Huston, and some lovely scenery, it remains overly didactic, talking down to even the middle school audience it is aimed at.

An old man (Jean-François Balmer) serves as off-screen narrator, describing his life as a young shepherd in occupied France. In 1942 the Nazis had not yet reached the southern part of the country, bordering on Spain, so much of life continued as usual. But the war had already touched the village. A boy named Jo ("Stranger Things'" Noah Schnapp) has a lot of new responsibilities because his father left to fight for France and is now in a German POW camp. Jo's grandfather (Reno) has warned him to stay awake while watching the sheep, but -- METAPHOR ALERT-- Jo dozes off, only to be awakened by a bear approaching the flock.

Jo runs to tell the village, and a group of men go after the bear and kill it, toasting Jo for sounding the alarm. But Jo's grandfather suggests that he should not have left the sheep. And, in the film's best scene, the incident is reframed the next day when Jo goes into the woods looking for his sheepdog and sees a stranger who tells him that the bear was a mother trying to protect her now-orphaned cub. Now, he says, either he or Jo will have to take responsibility for the cub. The stranger takes the cub with him without telling Jo his name.

The man, Jo will eventually discover, is Benjamin (Frederick Schmidt) a Jew hiding out with his mother-in-law (Huston), a grumpy widow who lives on a remote farm. He is waiting there in hopes that his daughter Anya will find him there. He has not seen her since he desperately thrust her into a bus as he was escaping a Nazi transport to a concentration camp. While he waits, he is helping other Jewish children escape over the mountain. Jo promises to help, too.

And then, the Nazis arrive and take over the town, searching everywhere for anyone who may be hiding anything. One German officer (Thomas Kretschmann) is less harsh, especially after his own daughter is killed in Berlin by an Allied bombing raid. He tries to be kind to Jo and his developmentally disabled friend Hubert (Declan Cole), taking them into the mountains to look for eagles, to make the war seem far away. But tensions are high and it is imperative to get the remaining children out of harm's way before they are discovered.

As the era of the Holocaust moves beyond the time of living memory, the struggle to understand and communicate what happened becomes even more difficult. That is even more complicated when it comes to explaining the history to young people in a manner that is accessible enough for them to understand and honest enough to be meaningful. A much better way to begin to communicate one of the most unthinkable horrors of the 20th century and remind us that civilized people can be responsible for atrocities is to show them films like "Paperclips," "The Number on Great-Grandpa's Arm," or "The Diary of Anne Frank."

Those already familiar with the basics of history may find it adds nothing new to see this film’s opening moments with terrified Jews wearing yellow stars herded into trains, a baby crying, a woman screaming, and a sad violin on the soundtrack. For middle schoolers, who may never have been exposed to these images, the film may be educational about such horrors. But “Waiting for Anya” remains thin, sugary, and over-simplified. 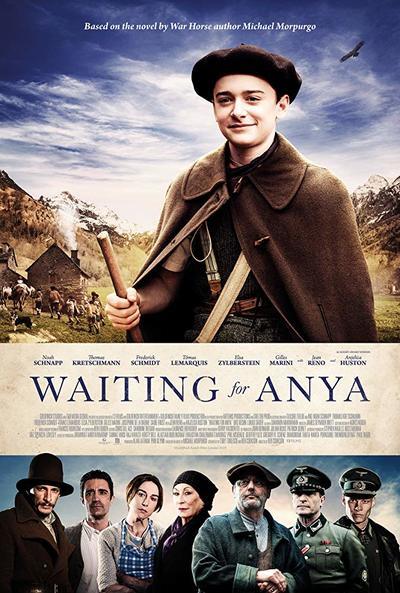