There’s more hand-me-down genre movie tropes than recognizable human behavior in the new sci-fi/horror hybrid “Vivarium,” about a young couple (Jesse Eisenberg and Imogen Poots) who is abducted and forced to raise a creepy pod person child. Which wouldn’t be so bad if “Vivarium” wasn’t about the suffocating nature of marriage and parenting in the 21st century.

“Vivarium” isn’t a fun watch, and not just because it’s generally claustrophobic and insistently bleak. Even less fun: watching a pair of talented actors go through the motions of an exhausted scenario that’s based almost entirely on pat assumptions about how pre-fabricated and insidious modern suburbia is. In every dream home a heartache? Yeah, sure.

After visiting a creepy realtor (Jonathan Aris), Tom and Gemma (Eisenberg and Poots) are driven to and then abandoned in Yonder, a very bland vision of an even blander gated community. Every house in Yonder is painted green, every backyard is mowed, and every cloud in the sky resembles a matte painting. Tom and Gemma try to escape, but they cannot find Yonder’s exit. So they settle in at #9 (no street address, presumably because they’re all the same), and periodically receive care packages of flavorless, but neatly vacuum-sealed perishables, like steak, eggs, and coffee. One such box includes a human baby; on the side of the box are these instructions: “Raise the child and be released.”

Time passes differently in Yonder, especially for Tom and Gemma’s unnamed child (Senan Jennings, and then later Eanna Hardwicke). This kid is like one of the Midwich Cuckoos from “Village of the Damned,” only he’s not nearly as interesting: he ages faster than normal, like a dog, and he asks awkward questions that have negligible existential value, like what’s a dog, what’s a dream, etc. Tom and Gemma’s child also screams whenever they don’t go through the motions of parenting him, like when they don’t serve him enough breakfast cereal. He also parrots their conversations back to them, like, oh, any time that Tom and Gemma argue. This kid is creepy, mostly thanks to Jennings and Hardwicke’s performances, but he’s not interesting enough to stick in your mind for long.

The same is basically true of Tom and Gemma’s frustrated coping strategies: he tries to escape by digging a hole in their lawn while she tries to bond with Jennings and Hardwicke’s bad seed. Tom and Gemma’s respective activities define who they are in “Vivarium,” because the plot doesn’t slow down long enough to relate any valuable information beyond expository dialogue. This is especially frustrating whenever Tom and Gemma’s situation tells us how they feel about each other, because those feelings are often as vague as Tom and Gemma’s ersatz son.

Most “Vivarium” scenes are too brisk and un-nuanced to flesh out Yonder’s ostensibly forbidding world of plastic, consumer-friendly domesticity. One moment we’re watching Tom trudge from the breakfast table back to his lawn hole. Then, a few minutes and scenes later, we’re watching him cough up a lung, and pantomime bone-deep weariness. Eisenberg’s a talented performer, but he’s not good enough to suggest soul-sick mania in a few seconds.

Viewers are also left with a number of basic conceptual questions that are never really answered, because Tom and Gemma don’t waste much time talking their way through their problems. Is that lack of introspection supposed to mean something? It’s hard to tell, especially given how unyielding most of the movie’s dialogue is, like when Gemma wonderingly tells her child that “You’re a mystery, and I’m going to solve you.” Equally banal dialogue exchanges, like when she tells him that a dream is “all sorts of moving pictures in your mind, but no one else can see them,” also reminded me of the human sensitivity that’s often lacking from “Vivarium.” I know this movie is supposed to be about what it’s like to be sucked dry by social expectations … but does it have to be so empty, too?

Every moment in “Vivarium” is a frustrating synecdoche, since no single metaphor or image convey an idea that you probably couldn’t think up with yourself during an especially foul mood. Marriage is a prison; parenting is a scam; home ownership is a trap; and you’ll probably die alone, without a substantial legacy. Understood, but who cares? If all you can show me is what you think isn’t genuine, you leave me with zero idea about what you think authenticity looks like, or why I should care. “Vivarium” is the horror movie equivalent of Warhol’s Campbell’s soup cans: easy to reproduce, easier to forget. 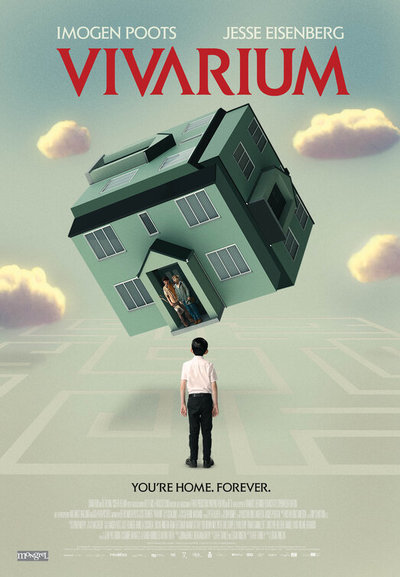 Eanna Hardwicke as The Boy