At first glance, Pedro Costa’s “Vitalina Varela” feels like it's challenging its viewer with its distancing avant garde style. It bears little of the trappings of popular movies, has only a little plot for us to follow and it looks more like a stylish photoshoot come to life. Most—if not all—of the shots in the film are static, composed to an extraordinary degree of rigor. This will either capture your attention for the next two hours or frustrate you. Should you surrender yourself to the film’s beautiful cinematography and whispered musings, you’ll find a breathtakingly gorgeous movie about love, death and immigration.

Taking its title after the name of its star nonprofessional actress, Vitalina Varela leads us through this artful journey as a Cape Verdean woman who travels to Portugal for the first time in the days after her estranged husband’s death. Unfortunately, she arrives late, missing his burial. “There is nothing for you in Portugal,” says a member of the airline cleaning crew, the only person to greet Vitalina as she steps off a plane without shoes and trickling water behind her. Those are the first words spoken in the movie and they are only whispers. Much of the movie’s dialogue will be spoken no louder. Despite the experience, Vitalina decides to make Portugal her new home as she tries to piece together her husband’s last days with the help of neighbors and a local priest (Ventura).

Co-written between Varela and Costa, the film explores the many emotions she feels now that she’s unable to grieve her husband. She floats around his dilapidated house—which should have been their shared home—as if she were a ghost, never at ease but angry and upset. Although they were apart for decades, her love for him has stayed with her and continues even after his death. Costa positions his camera either very close to Varela’s aching expressions of loss or far away, capturing the crumbling part of town outside Lisbon, cloaking it in darkness as if in a painting. The faces of the character look off to the sides of the camera and they talk past each other, connecting with neither each other or with the audience. It’s a stylistic choice that can be unnerving, making this docudrama feel neither realistic nor particularly dramatic, but there are still wells of emotions under the surface that can be appreciated from wherever we’re sitting in the theater.

Leonardo Simões’ stunning cinematography and Costa’s fondness for stillness enhances the haunting sensation in “Vitalina Varela.” Striking lights pick up certain shapes and create new ones against scraggly surfaces. The film’s colors are subtly darkened to create an even more expressionistic sensation, like the scene when Vitalina stands against a foreboding navy sky or how the brightly colored red and blue doors seem to pop against the drab concrete walls that hold them. At the film's start, a funeral procession of men walks through old cobblestone streets with somber expressions clouding their faces. A still camera observes the action from a distance. One man has fallen, his hand still trembling, and later, he’s revealed to be the priest who becomes Vitalina’s closest companion. But even his presence seems to bring her little comfort, as his potential for falling feels like a physical reminder of her husband’s death. For those who have seen Costa’s previous movie, “Horse Money,” it’s a reversal between Ventura, who played that film’s main character, and Varela, who only had a supporting role. Now, it’s her time to shine and her tremendous performance often speaks more loudly than how she says her lines.

Over many of his previous works, Costa has focused on emotional stories facing impoverished characters, be it a young drug addict of “In Vanda’s Room” or Ventura’s first appearance in Costa’s work as a Cape Verdean immigrant who calls his neighbors his children in “Colossal Youth.” Like those movies, “Vitalina Varela” is filled with imagery that plays on a heightened level of composition over naturalism, layering foreground and background objects that feel minimalistic yet full of life. The camera never follows her around, but it feels acutely attuned to every moment of unspoken sadness or frustration, capturing every whispered thought. This is one of those movies that will play better on a big screen, where you can immerse yourself into this visual landscape and soundscape, absorbing it all without looking away at a distraction. "Vitalina Varela" doesn’t make itself easy to watch but offers many rewards to those who dive in to explore its spaces and emotions. 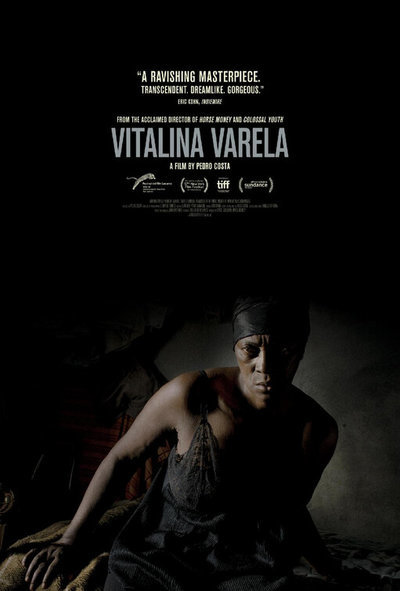