As I finished watching the British crime drama “Villain,” I asked myself: is this based on a true story? Not because the movie’s contrived gangster drama is realistic, or anything: we follow Eddie Franks (Craig Fairbrass), a moody blue collar ex-con, as he tries to rescue Sean (George Russo), his abusive junkie brother, and The Green Man, their family’s pub, from being taken away by Roy (Robert Glennister), a generically P.O.ed mob boss.

Instead, “Villain” is the kind of stiflingly reverent genre picture that is so beholden to its main characters’ pity-me worldview that its predictably downbeat ending feels like the kind of hero worship that you often find in either a cloying biopic or a hidebound true crime adaptation. In other words: “Villain” often looks like the kind of eye-roll-induing hagiography that results when you either love Eddie Franks a little too much, or have lost a really steep bet to him.

The tragic nature of Eddie’s story is enthusiastically foregrounded during the movie’s opening scene, when Sean is stripped and threatened at gunpoint by Roy and his perpetually annoyed heavy Johnny (Tomi May). Sean’s the kind of helpless supporting character who seemingly only exists to make our antihero protagonist look good, so of course he pees on himself while Roy threatens him. Sean also immediately overwhelms Eddie with his problems after he picks his brother up from jail, especially Sean’s drug abuse, and his impossibly high outstanding debt to Roy.

Of course, Eddie, an unbelievably Byronic but noble guy, tries to rescue his little brother and their pub. Eddie’s so generically decent that he gives heart-felt goodbyes to his prison’s guards while he’s being released (“Look after that family, Danny”). He’s also got a comically short fuse, as we see in an early scene where he thrashes a pair of disrespectful and heavily mobbed-up publicans. Still, the thing to remember about Eddie is that while he’s got a big, bleeding heart, he’s also a saint-like pragmatist, as we see in his interactions with everybody, including his estranged daughter Chloe (Izuka Hoyle), and his loyal BFF Mike (Mark Monero), as well as more unsavory types, like Roy, whom Eddie talks to with hand-wringing patience, and Sean (who we’ll get to in a moment). Eddie’s just a tough, but regular bloke, trying to get by under impossible circumstances.

At least, that’s how Eddie’s supposed to come across. In the movie, he’s mostly humanized by Fairbrass’ tough guy charisma and sensitivity. Fairbrass almost sells otherwise awkward scenes between Eddie and Chloe just by exhibiting a desperate kind of neediness whenever his character affects a paternal tone with his daughter. Which is especially crucial given that the dialogue in these scenes is forgettable, and so is their direction, and sickly lighting. Fairbrass’ commanding performance is not strong enough to rescue grubby kitchen sink scenes featuring Chloe, who is presented as just another problem that Eddie has to take care of, what with her young child, and her predictably abusive boyfriend.

But Fairbrass does make you want to care about Eddie, especially when he tries to not beat the snot out of his brother. Sean, by contrast, repeatedly screams at and beats his sullen girlfriend, who is mostly defined by her cocaine habit. Sean also doesn’t tell Eddie about Roy’s interest in The Green Man, which makes his drinking, screaming, and coke-snorting even more unbearable. You can always tell that Eddie sympathizes with his brother thanks to Fairbrass’ noticeably restrained frustration. The Franks boys’ escalating tension eventually comes to a head, and in an unpleasant way that makes Sean look even more useless than he already did. But Fairbrass and Russo—the latter of whom is good enough, albeit in a mostly thankless role—make you want to stay invested in their respective characters, even when it’s obvious that their stories cannot end well.

Unfortunately, that realization frequently dawned on me as I watched “Villain” since its creators barely developed their antiheroes’ personalities. Nobody in this movie has a complex inner emotional life, so it’s not surprising that the movie’s ending is ridiculous. “Villain” is basically an inert character study about the kind of popsicle protags that you only encounter in underwhelming “true stories.” I know Eddie Banks doesn’t exist because I have seen “Villain”; I also wonder why the makers of this film are so eager to pledge allegiance to a guy who, in real life, would probably never give them the time of day. 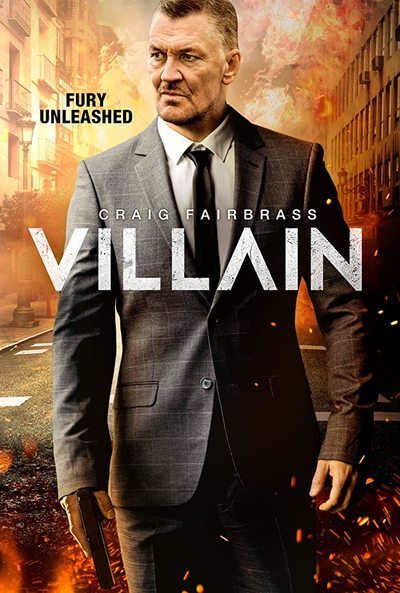 Rated R for strong violence, pervasive language, drug use and some sexual material.

Lautaro Tull as Jacob Till