In the corny horror-comedy "Vicious Fun," an aspiring horror filmmaker learns life lessons whilst running for his life from a cabal of goofy serial killers.

Hapless “horror journalist” Joel (Evan Marsh) thinks he's smart enough because he recognizes horror movie cliches: he runs through a checklist of grievances while interviewing a disengaged horror director (who promptly disappears after this opening scene). But Joel's cinephilia doesn't help him much after he stumbles upon a self-help group for murderers, even though they’re almost exclusively defined by generic horror movie tropes.

There’s guys like Fritz (Julian Richings), a nebbish accountant with a clown fetish, and yuppie Bob (Ari Millen), a homicidal Bundy-esque "pickup artist." There's also one woman, and her name is Carrie (Amber Goldfarb). Carrie wears a leather jacket, has slicked-back blonde hair, and enjoys murdering other serial killers, most of whom are either outright misogynistic, like Bob, or psychopathically self-absorbed.

Carrie not only helps Joel to escape certain death; she also teaches him the value of consent. Which is presumably important since Bob's next target is Sarah (Alexa Rose Steele), Joel's attractive, but uninterested roommate. Carrie's also not much of a character; she saves Joel, and also points out all the ways that he’s obviously out of his element. If you enjoy watching barrel-penned fish get got with a BB gun, you're bound to love "Vicious Fun."

"Vicious Fun" courts that kind of glib dismissal since so much of the movie reassures viewers that its creators are also addicted to the formulaic slasher movies that they kind of, sort of mock. But being aware of horror movies cliches isn't the same thing as criticizing (or thoughtfully commenting on) them. For proof, see "Vicious Fun," a horror satire whose latent sexism is that much more unfortunate given that Carrie, in a later scene, warns Joel that he can't make Sarah like him: "You can't force a person to feel something, or trick them into loving you. You're not entitled to that." That's the message the makers of "Vicious Fun" soft-shoe up to, but never really lay into.

The rest of the movie revolves around a graphic, but otherwise unmoving killing spree as Joel tries to run away from Bob and other schticky antagonists. You never really have to wonder what motivates killers like ninja assassin Hideo (Sean Baek) or fuming giant Mike (Robert Maillet), because they’re obviously what they look like, and are mostly defined by the kind of blustery, posturing dialogue that would make most professional wrestlers blush. Hideo boasts about the time he hid “for 16 consecutive hours lying in wait for my mark while I slowed my heartbeat to almost nothing.” Then he asks: “Have you ever bitten into a kidney?” Mike throws down by comparing himself to a shark: “I just want to hunt, to live by pure instinct.”

Bob, the movie’s relatively delicate-looking killer, is also the most dangerous, so his weak trash talk game is at least counterbalanced by a higher body count than most. He’s also a great test of how much you’ll enjoy the general wispiness and please-like-me desperation that ultimately defines “Vicious Fun.” Because while Bob is obviously meant to represent a certain kind of socially imperceptible toxic character, there’s only so much to get about a creepy smooth-talker who tricks a few dim bulb cops into thinking that he’s an FBI agent. Bob also seduces Joel into thinking that he’s somebody worth knowing more about, or sucking up to, as Joel initially does. “Guy’s a chameleon,” Carrie warns Robert during a characteristically ungenerous info dump of expository dialogue. But no, sorry, Bob’s just another Patrick Bateman clone, only without all the disturbing qualities. He’s really only as threatening as he is relentless.

Speaking of Carrie: she’s presumably the counterbalancing spirit of “Vicious Fun” since so much of the movie revolves around Joel’s discovery that, holy cow, there’s more to life than what you see in paint-by-number slasher movies! Carrie vows to “kill every one of those sick f**ks”—meaning Bob and his claque—but she’s sadly only a foil for nerdy milquetoast Joel.

If screenwriter James Villeneuve and director Cody Callahan (who also has a story credit) had pushed things a little farther, Carrie’s role as Joel’s enlightening lady killer buddy could have been more impressive—or offensive. Like Bob’s retrograde, but essentially toothless threats: next time he sees Sarah, he’s going to make her go “all the way!” Or how about Hideo, who licks one of two kitchen knives before throwing them? These sort of carbon-dated, but studiously inoffensive monsters are revealing, but not in the way that they’re supposed to be. So while the makers of “Vicious Fun” want you to award them points for being light, but also serious enough, their villains (and therefore their biggest ideas) simply aren’t gross and/or woke enough to be memorable. 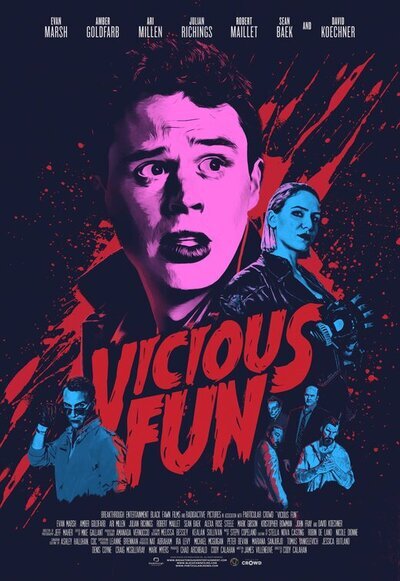