An ecological catastrophe has launched the world into “the new dark ages,” as an opening title announces at the start of “Vesper,” a dystopian fairy tale about a 13-year-old girl who wants more than she’s taught to expect. Vesper (Raffiella Chapman), the curious title character, scavenges for seeds (to grow her own food), for power sources (to keep her ailing father alive), and for love (to replace her absent mother). Her prospects are slim, on all three counts, but that doesn’t stop her from scavenging, experimenting, and negotiating her way towards whatever she needs.

Vesper has to do more than she’s told she can for her and her father’s sake. And in “Vesper,” co-writer/co-director duo Kristina Buozyte and Bruno Samper (“Vanishing Waves”) convincingly dramatize a turning point in their solitary heroine’s life—the moment when Vesper learns that the ground beneath her feet will probably never stop shifting.

Unlike a lot of canned coming-of-age stories, “Vesper” focuses more on credible growing pains than token empowerment and trite reassurances. “Vesper” is the rare science-fiction movie that’s most convincing when its tone and narrative are more surreal than reassuring and borderline absurd instead of cathartic. It's also gorgeous and dream-like thanks to its surreal production design and storyboard-perfect mise en scene. These immediately attractive qualities make some contrived plot twists and baldly stated dialogue seem far less important than the movie’s total vision of adolescence in the shadow of environmental crisis.

In a few early scenes, Buozyte and Samper quickly establish the chilliness of Vesper’s hierarchy-bound world. She soon discovers that her bed-ridden father Darius (Richard Brake) needs more electrical power to keep him alive. So Vesper reaches out to Jonas (Eddie Marsan), the ruthless leader of a cult-like compound who trades blood and sex for essential resources like food, shelter, and power. Unfortunately, the terms of Jonas’ aide are too steep, and Vesper knows it: she warns him that she doesn’t want to become a “breeder,” like some of the other women in his group. He scoffs, but doesn’t correct her.

Jonas cautions Vesper that she shouldn’t get her hopes up, as far as improving her uneasy station in life. “You think you’re better than everyone else,” he tells her. Unfortunately, Jonas isn’t the only one who reminds Vesper that she’s living in an unwelcoming world, and therefore must lower her expectations. “You don't know the cost of dreams,” says Darius, speaking to Vesper through a drone-like robot that accompanies Vesper on her day-to-day tasks.

The threatening implications of these warnings are both clear and sensible, though both men obviously want to protect Vesper for different reasons. Vesper doesn’t trust Jonas, but you can see why she might be tempted.

Some hope presents itself to Vesper after she stumbles upon Camellia (Rosy McEwen), a mysterious refugee from an exclusive upper-class Citadel living community. The Citadels hoard their resources, just like Jonas’ group, and also keep pale, synthetically grown humanoid Jugs as indentured property. Vesper still dreams of living in a Citadel, because why wouldn’t she? She bonds with Camellia, and in not always in ways that can be explained by platitudinous romantic or pseudo-familial gestures. In one scene, the two women howl like wolves after Vesper asks Camellia what various animals sound like. Vesper continues making noise for a few awkward and impossibly long seconds after Camellia stops.

Vesper is a survivor and her actions and relationships reflect her emotional fragility, pragmatic cynicism, and abiding naiveté. Any given conversation has the potential to erupt in violence. That makes a lot of sense in a world where the remaining humans are surrounded by poisonous or parasitic wildlife. Everyone uses everything, which puts Marsan’s unrepentant manipulator in the unique position of being both a great villain and an attractive voice of reason. He’s the human face of a world that’s as obviously hostile as it is perplexingly attractive.

“Vesper” commands viewers’ attention with its exceptionally well-realized costume, sound, and production design, as well as some well-utilized, Cronenberg-icky creature and special effects. But Buozyte and Samper’s movie is even more impressive for its unsentimental depiction of ruthless people who are both products and active participants in their environment. Even Vesper does what she must to push get closer to an uncertain and often hopeless-seeming future.

A considerable amount of computer animated graphics sometimes limits Buozyte and Stamper’s otherwise expansive vision. Granted, many scenes are understandably pre-visualized, and thus never over-complicated by too many camera set-ups or movements. But a general emphasis on human performances and characterizations makes this speculative drama seem real enough. “Vesper” doesn’t just ask viewers to root for one more hopeless case as she struggles to triumph over adverse living conditions. Instead, it asks us to spend time with a young protagonist who thinks she’s on the verge of a breakthrough and leads us to constantly worry that she might be wrong. 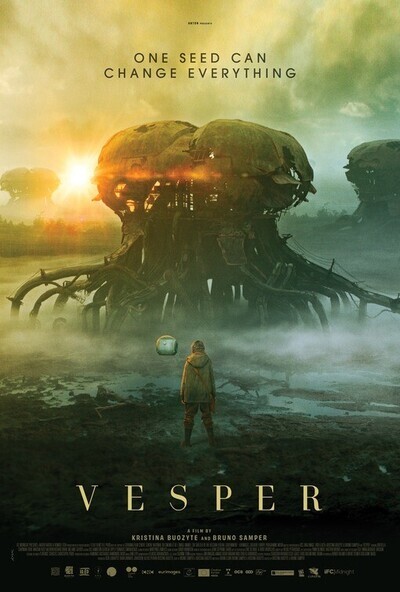