Musa Syeed’s first feature, “Valley of Saints” is a quiet tapestry of such colorful beauty that it had me sighing and smiling through every scene. Set in the waters of Dal Lake (Kashmir), it takes us through the life of Gulzar (Gulzar Ahmed Bhatt), who plans to secretly escape his homeland with his best friend Afzal (Mohammed Afzal). He meets a scientist named Asifa (Neelofar Hamid), and has to decide. At one level, this is a classic love triangle: a man competes with his best friend for a woman’s attention. At another, this is a film we’ve never seen before: Syeed explores the heart of a rarely visited landscape, and the souls of the resilient Kashmiri people. This is an amazing film.

Morning breaks. Gulzar wakes his beloved, white-haired uncle. Tending to his needs, he helps him brush his teeth. He feeds him breakfast. Massages him. After his uncle departs, he leaves for work as a shikara wala. The shikaras are cousins of Italian gondolas: long slender, two-seated wooden boats, used to taxi tourists through the lake.  Gulzar offers rides to visitors through the tranquil setting. Because of political problems, however, the industry suffers, so their opportunities suffer.

Afzal arrives and the two spend their evening together—singing, hugging, playing. These are two friends whose love far exceeds any Hollywood bromance, where such tight friendships seem to end with grade school. The two here are one in love, or something deeper. They remind me that a friendship is possible that reaches such a depth that “love” is not a sufficient adjective. It is as though modernity coerces us to skimp on friendship, though the struggles of modernity—nationalist wars—orphaned them, bringing them together in the first place. And, then they meet Asifa.

Asifa is an American-trained researcher exploring pollution levels throughout the lake. She is, at first, cold and abrasive to these gentlemen, and that ignites their attraction to her. She is a perfect contrast to them. They are two men—rather, boys—from a small, sheltered idyllic world trying to break out. She is an expat who has traveled the globe, now returning home to see the environment beneath the greenery, seeing the second side to Kashmir.

If a place on the earth can lay claim to paradise, it is Kashmir, and if there is a place that embodies all the dark consequences of humanity, it too is Kashmir. It is a special land of forced contradictions. It is full of colossal green mountains. Dal Lake is blanketed by lily pads. The people themselves have distinct features; their beauty and quiet—almost zen like calm—makes them distinct from their fellows across the Subcontinent.

But, because of its scenic majesty and location, Kashmir is the subject of a generations long tug-of-war between India and Pakistan. The result, in the film, is an uprising taking place a block away, between separatists throwing rocks and soldiers firing bullets. If that is not enough, the neighborhoods feel like shanty towns filling up the lake with discarded paper and plastic, making much of the water poisonous.

There is something complex in Musa Syeed’s direction that captures so many contrasts and so many layers. Almost all the performers are non-actors, perfectly cast as simple people with tender dreams, navigating life within a larger narrative far stronger and forceful than they themselves are. They exude a tenderness in disposition and tone that quickly draws our attention and sympathy.

The sets are fascinating. Some of the buildings are such ornate wood-carved structures that Syeed gives us just enough to get a flavorful taste. Others, however, are so functional and repulsive that we feel the oppositions in the juxtapositions.

Most of all, he has a skill in capturing the quiet moments in life, inviting us to share in the serenity. The film works as a deep commentary on noise, where silence represents all of our ideals and noise represents the shattering of that mythic perfection. The lake’s only sound is the trickle of water, sometimes interrupted by the shikara oars. Meanwhile, guns blast from the rifles of fully armed guards, just minutes away. As tensions rise between Gulzar and Afzal, they too fight, splashing the water, removing the calm. All in all, the default sound of the environment is still a deep, almost inviting silence. Meaning, against all the decay, our ideals persist.

In the end, as Gulzar and Afzal try to run away, they have to choose between their loves. Is it the love for each other that helps them escape? Are they held back by love for their withering homeland that once seemed to be protected by saints? Or, is there something else? Syeed’s film is a most ambitious, most intimate picture about a most persistent, most modest people. 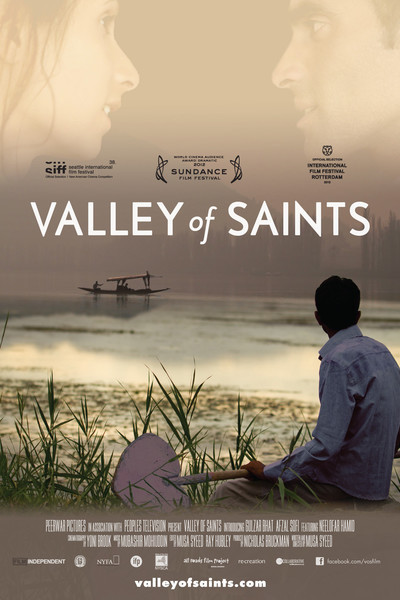