Rappers are the new rock stars. They have the same cult followings, clutch on culture, and stronghold on the charts as rock musicians did in generations before. They ignite the same parental skepticism, push boundaries, and dominate trends and fashion in the same way. Yet with all this visibility, the genre is shrouded in a level of detachment.

The pop charts are highlighted with real names: Olivia Rodrigo, Dua Lipa, Ed Sheeran. But a glance at the rap charts will reveal personas: Future, 21 Savage, Lil Baby. “Untrapped: The Story of Lil Baby” puts the process of the rap come-up in perspective. Using Lil Baby’s story, this documentary not only enlightens us to his legacy as one of our generation’s biggest stars, but also dissects the rags to riches paradigm that outlines the genre and the culture of Black America that produces it.

“Untrapped” uses Black oppression, Atlanta politics, and Lil Baby’s relationships to give a nuanced portrayal of everything that’s fueled his fame. His nonchalant fall into music—where his peers and friends encouraged him to turn to rap instead of continuing his hustle on the streets—is not the typical rap origin story. He was disinterested initially, but motivated to craft his natural talent and relentless work ethic to reconfigure a new idea of a successful life for himself.

Lil Baby was already living his own rags to riches story, as a successful street hustler with a million dollars, girls, and cars. He had checked all the boxes of what success looks like, so it begged the question: why give up his money and success now to risk losing his stability and street cred if his rap career never takes off?

It has long been known that the American Dream is a fallacy. The economic entrapment of poor Black people affects their idea of attainability, and what constitutes success. Being a poor Black person means that your town becomes your world, and the lives and culture of a poor Black town operate on their own rules, ones forced upon them. It’s a trap. Through having the biggest album (across all genres) of 2020—a year of emotional and physical plague as well as social union and political uprising—these values are inherently integral to Lil Baby’s career and therefore, in addition to his upbringing, essential to telling his story.

The structure of "Untrapped" is an amalgamation of old family videos, never-before-seen archival footage, and interviews with Lil Baby and some of hip hop’s biggest, most influential names like Young Thug, Drake, and Kevin Lee and Pierre Thomas of Quality Control Music. “Untrapped” is teeming with respect and admiration, rather than the simple curiosity and fascination (and clout) that motivates less impactful biopics.

Despite a crisp 90-minute runtime, there are pacing issues that cause an unnecessary feeling of drag in the latter third. The content remains of interest, but tighter editing would benefit the loss of engagement. However, it manages its topics well, creating seamless transitions among its biographical aspects and its political pointers. It all feels cohesive, and while its social commentary is important to its storytelling, it isn’t a history lesson, nor a political lecture, but an expert biography that takes all aspects into account.

As new rap movements emerge with a palpable sense of rapidity and frequency, each time with a new set of icons, it can become difficult to take pause and thoughtfully examine each individual’s rise to stardom. But the success of Black people in mainstream media is important; it means something, and “Untrapped” uses the story of Lil Baby not only to communicate his importance as an artist, but as an activist. Both the artist Lil Baby and the film about him pursue a deeper gratitude and respect for both this rap star specifically and the genre itself. 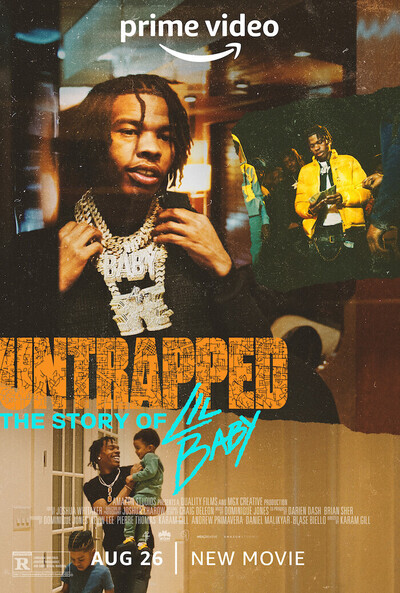 Lil Baby as Self