Amidst all the grunts, groans, howls and long streams of exposition that make up the dialogue in “Underworld: Blood Wars"—the fifth installment of the inexplicably long-running franchise that somehow managed to make the notion of a centuries-long war between vampires and werewolves boring beyond belief—there is exactly one line that rings loud, clear and true. It comes right at the beginning during the opening narration delivered by Selene (Kate Beckinsale), the catsuit-clad vampiric death-dealer at the center of the saga. “I had lived beyond my time," she remarks. Trust me, truer words were never spoken about a franchise that started off as nothing more than boring hackwork and which has only gotten worse with each additional installment. At least this one has the good grace to appear in multiplexes in the dead of January, making it far more convenient for audiences to give it the cold shoulder.

Although it is impossible to imagine anyone going to this film having not seen the earlier installments, this one opens with several minutes of highlights, for lack of a better term, from the previous installments to get viewers up to speed, not that it matters very much. Thanks to a number of betrayals and whatnot, Selene now finds herself on the run from both her own vampire clan, who want her dead, and the werewolves, known as Lycans, who want her in order to find the location of the daughter she has hidden away, whose blood can apparently help them defeat the vampires once and for all. This is because, as the child of a vampire and a Lycan (at this point, don’t ask), she is a “purebred hybrid.” Anyway, having seen their forces vastly depleted from Lycan attacks, ambitious vampire elder Semira (Lara Pulver) convinces the other members of the Vampire Council to grant Selene amnesty for her alleged crimes against her people so that she can train a new set of death dealers to help stop the attacks led by all-powerful Lycan leader Marius (Tobias Menzies). Shockingly, it turns out that Semira’s offer is a trap and Selene, along with hunky death dealer David (the returning Theo James) are on the run again with both sides pursuing them, first to a remote vampire outpost in the frigid north and then back to the council, where everyone converges for a battle royale of semi-epic proportions—a blood war, if you will. (Technically, a CGI blood war, but that doesn’t look quite as good on the poster.)

Look, I am not completely immune to the charms of a movie in which a stylishly-clad woman runs around slaughtering dozens of goofy-looking monsters without breaking a sweat or a nail—I assure you that I am looking forward to the new “Resident Evil” movie with the kind of giddy excitement that others tend to reserve for royal weddings and new “Star Wars” films—but “Underworld: Blood Wars” is even more of a drag than its predecessors, which I didn’t think was even possible. The storyline is an embarrassingly murky mess that takes something that could've been made into agreeably cheeseball fun and sucks all the fun out of it with a ridiculously self-serious approach and an ever-expanding mythology that has now become extremely confusing (“Assassin’s Creed” was a model of lucidity by comparison). Even die-hard fans of the franchise (who presumably must exist somewhere, though I have never met one) are likely to be just as perplexed with the on-screen happenings as newcomers.

The visual style of the film is just as opaque as the narrative—the whole thing is shot largely in dimly-lit rooms with a steel-blue & black color scheme that renders much of the footage difficult to decipher for anyone who chooses to see it in 3-D. As for the fight scenes, they are the usual junk with any number of visual tricks, including rapid-fire editing and slo-mo photography) included to try to cover the fact that they are utterly devoid of anything resembling excitement or propulsive, kinetic action—I promise you, the fight scene at the ticket window when I was trying to convince the seller that I should probably get a pair of 3-D glasses since I had just paid for a 3-D ticket was far more gripping and better choreographed than anything in the film.

The most baffling thing about “Underworld: Blood Wars” is once again the inexplicable presence of Kate Beckinsale in a franchise that has not really done her any favors over the years. In all of these films, Beckinsale simply seems to be going through the motions with an attitude that suggests that she knows that she is slumming and is only going to do the absolute minimum required to earn her paycheck. Granted, this has been her approach to the films from the beginning but it is especially off-putting in the wake of having delivered her finest performance to date—indeed, one of the very best performances of 2016—in the wickedly funny “Love & Friendship," which also reminded viewers of what she was capable of as an actress.

Beyond that, the only notable aspect of the film is that it marks the feature directorial debut of Anna Foerster, a rare example of a woman being allowed to direct a reasonably large-scale franchise film. Alas, all it proves here is that a female director can make a film of this sort that is just as listless, derivative and perfunctory as one made by a man. 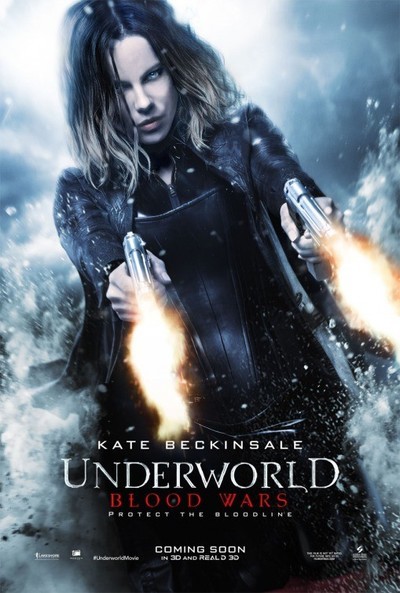 Rated R for strong bloody violence, and some sexuality.