A lot of films about suburban folk and others like them feature pleasant piano arpeggios in their music scores. Sometimes they’re too pleasant, sometimes they’re fake-thoughtful, sometimes … well, I don’t want to get bogged down in my film music peeves here. My immediate point is that the music in “Under the Tree,” an Icelandic film directed by Hafsteinn Gunnar Sigurðsson, does contain a piano, but what sounds like a prepared one, its strings dampened, and its low notes prominent in the minimal playing. (The score is by the acclaimed composer Daniel Bjarnason.) This sets an unusual tone, insinuating but not quite pitch-dark, one that the movie does an exemplary job of maintaining.

This cinematic parable has a simple premise. It’s spring in a suburb of Reykjavik. Eybjorg, the younger second wife of Konrad, enjoys sunning herself on the backyard porch of her house. Alas, a big, beautiful tree in the yard of older neighbors Baldvin and Inga, casts a long shadow. At first negotiations concerning this are cordial. Inga can’t seem to contain her resentment of Eybjorg, and Baldvin doesn’t help matters by noting, in conversation, “At least she takes care of herself.” The resentments mount steadily.

The estrangement puts Atli off the rails, particularly with respect to rights concerning the couple’s five-year-old daughter. Baldvin is distressed when he gets into his car one morning and discovers all his tires have been slashed. Inga, who has not been herself, apparently, since the disappearance of her older son, a presumed suicide whose old car still sits in the driveway, becomes even less herself once she’s unable to find her cat.

And so undeclared war breaks out. While “Under the Tree” is not entirely unpredictable in its broad outline, there are more than a couple of “Oh my God” moments to be had. What makes it a better-than-average satire on the unthinking hostilities that human beings are prone to is its steady intelligence, combined with a humor sometimes so dry as to be undetectable. The superb cast, particularly the steely-eyed resolve of Edda Björgvinsdóttir’s Inga, do marvels in maintaining the tricky tone. Director Sigurðsson’s 2011 film “Either Way” was remade in the U.S. by David Gordon Green as 2013’s “Prince Avalanche”; this picture is well worth getting on the foreign-language ground floor for. 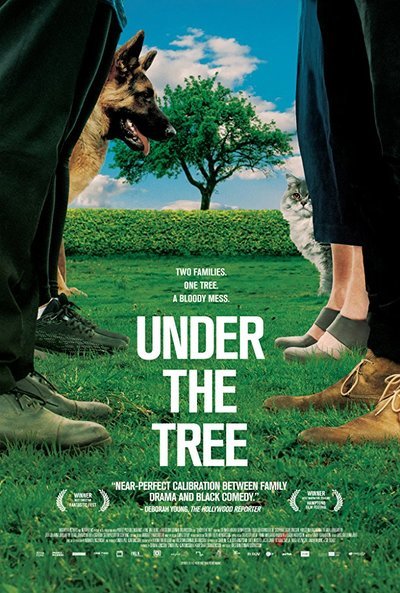