Under the Stadium Lights

"Under the Stadium Lights" is sincere and well-meaning, but its tribute to a Texas 2009 high school football championship team is so certain of its story that it fails to reach for an audience outside of its world.

The film is based on a book called Brother's Keeper, written by Al Pickett and Chad Mitchell, who was a cop, pastor, and team chaplain. "Under the Stadium Lights" depicts what Mitchell did to inspire and support the team, in particular three outstanding players who had troubled home lives. The script gets some credit for skipping the usual underdog movie scenes with very little time spent on training montages or locker room pep talks. Unfortunately, what it replaces those scenes with never connects with anyone not automatically invested in the story.

Mitchell (Milo Gibson) tells the team that everything depends on the Holy Trinity. By that he does not mean the Father, the Son, and the Holy Spirit but the three Fs: faith, family, and football. He tells them that they are their brother's keeper and gets them to chant and hashtag the abbreviation #brokeep. Mitchell later explains that he was once complaining about the news on television when he realized he was called to do more than complain; he needed to do something about it.

Being each other's keeper primarily consists of sessions where the players "talk about stuff you can't talk about at home." They quietly listen to each other's most painful stories and express compassion and solidarity. But as much as they talk about unity and being "something bigger than ourselves," we do not see the brotherhood translate into any specific actions on the field or off.

And that F for family is a tricky one, as the players at the center of the story deal with a father on drugs, a mother in prison, and a brother in a gang. What does it mean to put family at the center if your family is in trouble? How much can football give these teenagers? Mitchell himself faces family problems when his commitment to the police force, the team, and to an adult gang member who wants to leave that life behind cause his wife to ask if they can ever have a moment together without someone calling him. His young daughter asks, "If Dad's protecting the city, who is protecting us?"

A single shot in the film version of "Friday Night Lights," with a perfectly maintained football field next to a shabby high school, told us everything about the vital importance of high school football in towns like Abilene. "Under the Stadium Lights" takes this for granted and expects us to, as well. It is very much preaching to the choir. The film never questions the idea that a public high school football team would have a chaplain and all would kneel in prayer together before a game. It also never questions why all of the troubled players are Black or Latino while all of the people who guide and help them are white.

The movie's dialogue is clunky and the acting is uneven, which keeps the tone more preachy than dramatic. In a small role as the proprietor of the local barbecue joint, Laurence Fishburne gives a performance so vibrant and endearing that he just reminds us of the limitations of the other actors.

The cinematography and editing are the film's other strengths, and the scenes of the football games have a sharp, kinetic energy. But they would be more powerful if more based in the storyline, or if they showed how the chaplain's guidance connected to specific strategies.

There are many great movies about high school football teams, many based on true stories. They set a high bar with thoughtful, compelling explorations of issues like the pressures put on young men and the challenges of excellence and teamwork. "Under the Stadium Lights" tries hard to join those films, but never crosses the goal line.

Now playing in select theaters, and available on demand and on digital platforms. 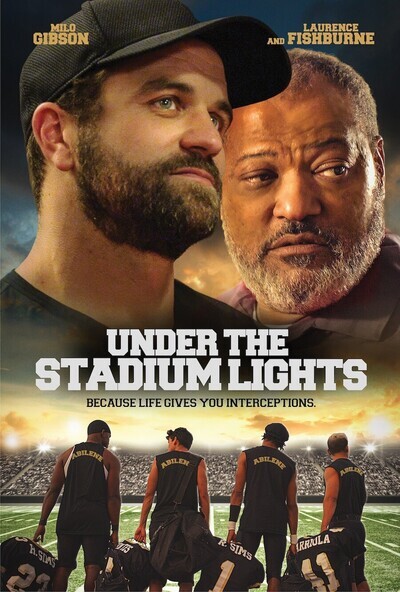