Its title already redolent of a perhaps skewed idea of Christmas cheer, “Uncle Nick” lays its cards on the table early, with ultra-hefty comic performer Brian Posehn delivering a brief history of Cleveland, Ohio in voice-over, all before director Chris Kasick offers the viewer a few shots of Posehn’s character lounging around in his underwear. For Posehn’s Nick, “lounging” means staring into the void of his hovel, chain-smoking and drinking. More misery is delivered via phone, when Nick is informed that his mother, in some sort of assisted living facility, is feeling poorly, and that it would be ill-advised for her to join the family for their Christmas dinner.

The promotional tagline for this movie, which Kasick directed from a script by Mike Demski, is “Nothing Ruins Christmas Like Family,” and that is indeed pretty much the gist of it. Posehn’s Nick is a middle-aged drunk who inherited his dad’s landscaping company while slick baby brother Cody (Beau Ballinger) has recently married into McMansion-level money, in the form of well-mannered but maybe a trifle uptight pharmaceutical sale ace Sophie (Paget Brewster). Sophie indulges the rather smarmy Cody rather inexplicably, while Nick resents the guy and lusts after Sophie’s 20-year-old-daughter from a prior marriage, the sassy and disaffected Valerie (Melia Renee). “She will be mine,” Nick muses in voiceover early in the film. Now, we know that hardcore drunks are both grandiose and can tend toward the delusional, but even given that, both Nick's aspiration and the assurance seem a little much. And yet the movie itself indulges it, if only to provide Nick with the opportunity to—once more, rather inexplicably—take something we’re supposed to recognize as a moral high ground at one point.

All of these hijinks, which also involve Sophie’s nerdy but perceptive younger son Marcus (Jacob Houston), and Nick and Cody’s also-sassy but more down-to-earth sister Michelle (Missi Pyle) and her husband Kevin (whose enthusiasm for his podcast is meant to signal “loser,” except when the filmmakers do the usual switcheroo you get in these stories; he’s played by Scott Adsit), are threaded between Nick’s recollections of an infamous real-life baseball game in Cleveland in 1974. The unifying twist is the sort of thing meant to impress a screenwriting workshop instructor, while the action leading up to it toggles between gross physical humor and imagery and in-your-face personal dysfunction. The bad behavior on display, instead of emerging organically from the characters, seems frequently chosen from a menu of sorts. Early in the movie, Posehn’s Nick is making chitchat with a Latino employee who’s just given him a “#1 Boss” coffee mug as a Christmas present. “Bet you never gave this to your bosses in Mexico,” Nick says to Luis (Joe Nunez). “Puerto Rico,” Luis corrects him. “Same thing,” Nick smirks. “No, it’s not,” Luis says. OK, so the guy’s a racist, too, that’s great. We’re supposed to root for him anyway, in a sense, is the point of the whole exercise.

Well, in this case, the exercise does not work, unless, I suppose, you are so taken with Posehn that you’ll follow him anywhere. This does not amount to his most distinguished work. If I want a Profane Domestic Farce Christmas Movie anytime this year, or next, I’m going to be sticking with “The Ref.” 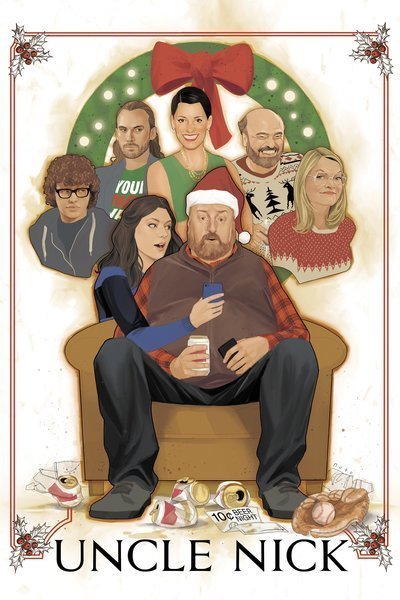