In Chicago, a city no stranger to Black revolutionary activists such as Chairman Fred Hampton Jr, Jesse Jackson, James Farmer, and so forth—are two Black women who are more than following in the past’s familiar footsteps. Janaé Bonsu and Ambrell “Bella” Gambrell (who also goes by the moniker Bella Bahhs) are charting their own paths.

Director Ashley O’Shay’s relentless documentary, “Unapologetic,” an 86-minute, truth-telling syrup of a film, opens simply. A group of Black activists march through a deluxe restaurant. They shout “mic check.” The uncomfortable white patrons are mostly annoyed, dismissive even, of these activists taking the day’s issues from the TV screen to the dinner plate. Tellingly, a white host asks in plaintive terms: “What is this helping, though?” This scene, filmed in 2015, happened pre- the revitalization of Black Lives Matter. Pre- the protests of 2020. Pre-pandemic. But it harks to our past, the demonstrations of the 1950s, our present, the systematic oppression of Black folks, and our possible future.

These activists are protesting the shooting of Rekia Boyd. If that name doesn’t sound as familiar as Trayvon Martin or George Floyd to you, “Unapologetic” tells you why. Boyd was fatally shot in 2012, near Douglas Park on Chicago’s West Side by Dante Servin, an off-duty cop. Servin approached Boyd and her group of friends, and attempted to buy drugs. When he was rebuffed, he fired his gun, killing Boyd and injuring another. Though Servin was later charged with manslaughter, the presiding judge threw out the case. The small-scale protests following Servin’s acquittal, however, and the relative disregard of her compared to her male counterparts, demonstrated the unconscious gender bias within even the most well-intentioned movement.

Bonsu and Bella Bahhs, the film’s central subjects, are working to spotlight that second layer of inequality. And through their stories, O’Shay loops in several other themes of injustice. Bonsu hails from South Carolina. She arrived in Chicago to earn her PhD in social work, later becoming a key figure in Black Youth Project 100 (BYP100), an activist organization taking direct action to change Chicago’s political landscape. Bella Bahhs is a raptivist. She records protest hip-hop tracks and leads rallies, often going toe-to-toe with Chicago police officers.

In some ways, the pair are polar opposites: Bonsu is shy, yet outwardly upbeat. The ebullient Bella Bahhs’ wide smile makes her as charismatic as a movie star. O’Shay smartly pears into these two young, super women through their personal lives. Bonsu is under tons of stress working on her dissertation; Bella Bahhs has a brother incarcerated in a prison that’s a four-hour drive away. Bella Bahhs’ grandmother has just passed away.

But O’Shay doesn’t deify these two women; she presents them as human, and uncovers how comfortable they are in their own skin. One scene captures Bella Bahhs giggling from weed, talking about dating with her friend Michelle. Another sees Bonsu’s roommate Alexis lovingly applying makeup to Bonsu’s face. O’Shay uses a single handheld cam for the majority of the film, imbuing “Unapologetic” with an immediacy comparable to its subject matter, and an intimacy similar to her two subjects.

But the big picture is never too far away. The police-friendly trio of Mayor Rahm Emmanuel, the State's Attorney for Cook County Anita Alverez, and Police Chief Garry McCarthy become the central targets of Bonsu and Bella Bahhs. At Chicago’s regularly scheduled police disciplinary board meeting, community activists and the relatives to victims, like Boyd’s brother, offer passionate pleas for justice. Lori Lightfoot, the board’s president, appears here. Between the city’s powerful trio, you can see the opaqueness that would lead to the tape showing Laquan McDonald’s murder at the hands of police being purposefully withheld from public view. Or how Lightfoot would become a shill for the police department, as the city’s present mayor.

Bella Bahhs spotlights the gender bias within Black Lives Matter too. The names most often raised—Trayvon Martin, Laquan McDonald, and so forth—are men. Rarely is the same outrage devoted to the murder of Black women, and a momentary critique is made of the homophobia in BLM, too (Bonsu’s mother identifies as queer). Black trans men and women are murdered with regularity, but we rarely hear about their names either. That thread gives “Unapologetic” the unique opportunity to speak on those issues with greater clarity, allowing for a more distinct identity.

Instead of further outlining those unconscious biases in BLM, O’Shay zooms closer to how Bonsu and Bella Bahhs’ personal lives inform their activism (and an opportunity seems lost). Some sequences are as light as juxtaposing the two women’s birthday parties, others are as heavy as Bella Bahhs visiting her incarcerated brother. Each is edited by Rubin Daniels Jr.’s supple hand. Each shows the ebullience of the activist in their most trying hours. There’s a shot in which Bonsu stares at a white board filled with statistics. She looks dejected, but she knows the enormity of her want for Black liberation. She’s weary, but she’s still willing to carry on the fight.

O’Shay’s “Unapologetic” is the embodiment of that desire; the spirit of generational, social change happening on a local level by two unabashedly brilliant and courageous Black women activists, unwilling to take “no” for an answer. 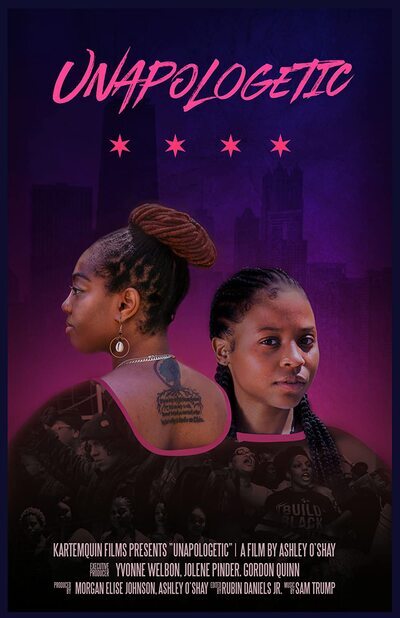