Great actors Ben Mendelsohn and Rooney Mara do their best to elevate the frustrating “Una,” but their director doesn’t seem to understand what he has in these two performers, constantly pulling back from their raw emotion and complex characters. “Una” should be a searing two-hander, a showcase for two performers to dissect gender roles, sexual abuse, and more. But director Benedict Andrews and writer David Harrower, who adapts his own play Blackbird, are constantly diffusing their own film, likely in a desire to make it more “cinematic” and less “theatrical.” This is an overblown and over-used concern. When done well, “theatrical” films can be riveting—reminding us of the intimate power of phenomenal acting—but filmmakers often reduce what worked about their source material in an effort to expand it to the big screen. Such is the case with “Una,” which I would imagine was unforgettable on the stage but is difficult to pin down on the big screen.

Una (Mara) is introduced in the way young, “troubled” woman are so often in independent cinema, dancing at a club and then having a quick sexual encounter in the bathroom. She wakes up the next morning, and has clearly made a decision, picking up her things and driving. She will arrive at the workplace of a man whose colleagues know him as Peter, but she knows his real name is Ray (Ben Mendelsohn). Ray used to be Una’s neighbor, and is notably older than she is. In flashbacks, we see glimpses of a young girl, a 13-year-old Una, with a younger Ray, and the fuzzy picture becomes clearer before Una puts words to it. Ray abused Una. The two were so involved that they almost ran away together, but Ray was caught and did four years in jail. Why has Una tracked him down so many years later? What does she hope to get out of him and what other secrets could he reveal?

The best element of “Una” on a screenwriting level is the complexity Harrower allows his duo. Well-captured by Mara, Una is a maelstrom of emotions, still sometimes looking like the 13-year-old girl who’s more upset that Ray left the night they had sex than he abused her in the first place. Abandonment seems to be her overriding emotion, and not just about that night specifically, but overall. She’s still stuck in the same small town, where everyone knew her story and where she’s been unable to move on, whereas Ray has a whole new life with a new partner and a good job. Why is that fair? Meanwhile, Ray is first presented as someone who realizes he made a horrible mistake but attests that he truly loved Una and had never done anything similar before or would do anything similar after. He argues repeatedly that he’s not a child abuser, but Andrews and Harrower allow suspicion to creep in on the viewer. Is Ray a broken man who made a horrible mistake or a lifelong predator? Mendelsohn captures this complexity well, always able to find shades of menace under his characters. They're both fantastic.

The problem with “Una” is structural. At first, it seems interesting that Ray and Una’s first encounter in years will come at his office as the world goes on around him and the sound of co-workers leaks through the walls. However, it soon feels like “Una” the film can’t sit still. We meet Ray’s co-worker Scott (Riz Ahmed), who may get fired that day, and Ray and Una have to hide from his boss. The thematic undercurrent is there—this is a relationship hidden from society—but it’s underdeveloped and distracting. “Una” works when Mendelsohn and Mara are allowed to look in each other’s eyes and convey years of rage and regret, and less so when it feels like the film is actively trying to get in their way. 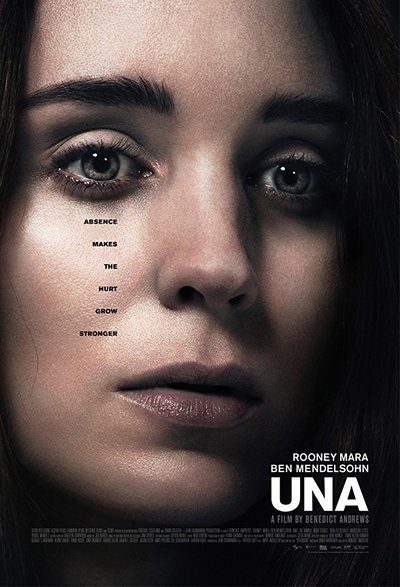 Writer (based on his play "Blackbird")