Turn It Around: The Story of East Bay Punk

In the last verse of the infectious “Choc-Stock,” a relatively early song by the mostly very excellent post-punk combo The Fall, the ever-dyspeptic frontman Mark E. Smith asks the listener, “Why are you laughing? Why are you smiling? At or with this song? It’s not like YOUR SCENE or YOUR SCENE!” The point being, well, I think you get it. The thing about scenes, and I believe this might be particularly true of scenes that coalesced around punk rock, is that members of them tend to want it both ways. They want to have their (metaphorical) secret handshakes all to themselves but they also want the world to understand just how cool their secret handshakes are/were.

Another thing is that all scenes are the same, kind of. A few years ago one of many punk-themed documentaries, this one focusing on a single venue in a once-industrial-leader town on the Eastern seaboard, came out, and a postpunk musician of my acquaintance was prominently featured therein. I was speaking to him about the movie and the venue it depicted, and he allowed, “Yeah, that place was unique in that it was one of several dozen venues you could play at within a 200 mile radius.”

One of the points that writer/director Corbett Redford seems to dearly want to make in “Turn It Around: The Story of East Bay Punk” is that the scene his exhaustive-seeming, two-and-a-half-hour picture chronicles, was and is genuinely unique. In the end the movie makes its case but it takes a lot of familiar stuff to get there.

Narrated by Iggy Pop, the story begins in the late 1960s, with Pop reminding us that San Francisco and the Bay area were the prime loci for the American counter culture. Archival footage of a less-than-amiable Governor Ronald Reagan talking about some form of final confrontation with the dirty hippies underscores the point. But the movie is not about San Francisco, or San Francisco punk—the title is precise. Yes, Jello Biafra of the Dead Kennedys is one of the picture’s many onscreen talking heads, but his band is not featured. Rather, after establishing the roots that S.F. and its punk club Mabuhay Gardens established, the movie goes to Berkeley and Oakland and surrounding boondocks. This is one of those movies in which a lot of figures and bands that you’ve probably never heard of are referred to by a raft load of interviewees as legendary, or something like that. From Psychotic Pineapple to the Yeastie Girls, there’s a lot of ostensible obscurity here. The movie also tells the story of the fanzine Maximum Rocknroll, which saw punk rock as a gateway form to other expressions of social activism. Back in the day, one rock critic, I think it was Lester Bangs, wrote that if the Sex Pistols were about tearing down the whole crummy establishment, the Clash were about what punk rock could put up in its place. Maximum Rocknroll founder Tim Yohannan eventually becomes a founder of a music space that also functioned—and continues functioning—as a community center, 924 Gilman Street, in Berkeley.

There’s a lot of history to go over before the movie gets there. About an hour and a half in, Rancid founder Tim Armstrong talks about a local punk phenomenon called “Hedgecore,” wherein mosh pit habitués, when away from the mosh pit, threw themselves into suburban shrubbery with all their might. At this point my own patience was a bit tried, as it was when a latter-day Gilman Street manager recalls putting a “no major label act” prohibition on the space, and saying “I’d do it again in a heartbeat.” The conditional irony here is that the movie’s executive producers are Billy Joe Armstrong, Mike Dirnt, and Tre Cool, aka Green Day, aka the single biggest band to emerge from this scene. You don’t have to be a Green Day fan to find this movie interesting, but you’ll definitely be more inherently invested in it if you are. 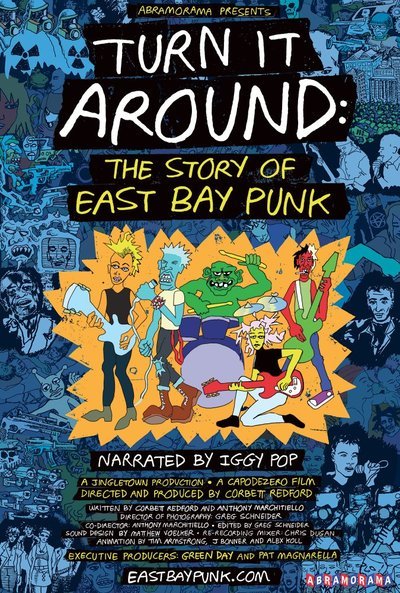 Billie Joe Armstrong as Himself

Miranda July as Herself

Silas Howard as Himself