Turn Every Page: The Adventures of Robert Caro and Robert Gottlieb

In a 2015 interview with the Paris Review, editor Gordon Lish was asked many questions about his controversial working relationship with Raymond Carver, one of the most famous in the editor-writer-relationship canon. Lish used a heavy hand on Carver's prose, slashing away at the text to create the "minimalism" for which Carver became famous. The original manuscripts, with Lish's extensive markups, are so revealing. It's an extreme editing job. And so: was the minimalist style Carver's own sensibility, or was it Lish imposing his? In the 2015 interview, Lish answered the questions testily, saying at one point: "Had I not revised Carver, would he be paid the attention given him? Baloney!"

Most editor-writer relationships don't make headlines, the way Lish and Carver's did. But there are other famous partnerships—like Maxwell Perkins and F. Scott Fitzgerald—where the editor plays such an important role they can't just be relegated to the background. Ezra Pound didn't "edit" T.S. Eliot's The Waste Land so much as he shaped it, and forcefully. You can feel Pound in that singular work. I'm sure, according to Pound, The Waste Land needed his heavy hand. But what is the editing process? There's a mystique about it, even to those participating in it.

“Turn Every Page: The Adventures of Robert Caro and Robert Gottlieb” is an engaging documentary about a famous editor-writer partnership, one that is ongoing. Robert Caro is the author of five massive best-selling books (1974's The Power Broker, about urban planner Robert Moses, and four volumes of a projected five-volume biography of Lyndon B. Johnson), and each of these books has been edited by Robert Gottlieb. Directed by Lizzie Gottlieb, Robert's daughter, "Turn Every Page" is a fascinating look at these two men, their separate careers, and their shared goals. It's also a glimpse of a world long gone, a world where there was more time to build careers (as opposed to erecting brands), and where a relationship like this one could be allowed to flourish.

Caro's "claim to fame" are his five books, which have garnered him legions of enthusiastic fans spanning generations. Gottlieb's claim to fame is more diffuse. Over the course of his lengthy career, he has edited upwards of 600 books, from Rona Jaffe's The Best of Everything, to Charles Portis' True Grit, to Jessica Mitford's expose on the funeral business, The American Way of Death. He edited Bill Clinton's autobiography. He worked with Doris Lessing, he edited many of Toni Morrison's books. He, famously, suggested to Joseph Heller that "Catch 18" be changed to Catch 22 (mainly to avoid comparison with Leon Uris' best-selling Mila 18). That one sure worked out, didn't it? With all of his other projects, Gottlieb's partnership with Caro is the most long-lasting. Caro is 87 and Gottlieb is 91. They both are fully aware that they don't have much time left to bring this project—and their legendary partnership—to its most satisfying conclusion, which would be, the publication of the final volume of Caro's LBJ biography.

What goes on between a writer and an editor is private, for all sorts of reasons, and it took some doing on Gottlieb's part to convince her father and Caro to participate. The men are not interviewed together. They don't sit side by side, swapping stories about semi-colons. This reflects their relationship in real life. They don't socialize with each other; they don't hang out casually. When they do get together, it's because Caro comes with manuscript pages in hand. (There's an amazing sequence where Gottlieb and Caro meet up at the publisher's office and wander around looking for someone, anyone, who has a pencil they can use. No one has a pencil. You don't know whether to laugh or cry.) How does Robert Gottlieb conceive of his job? "My job is to help him do what he wants to do." And: "He does the work. I do the cleanup. Then we fight."

Gottlieb (the director) uses a very light touch throughout. This is a family affair. There's a charming scene where Gottlieb and his grandson walk through a bookstore, with the older man pointing out all the books he worked on, sharing anecdotes with the kid. Both men's wives—the formidable Ina Caro and the equally formidable Maria Tucci—are interviewed. These are true partnerships. People from the publishing world are also interviewed: Caro's agent, Lynn Nesbit, publisher Lisa Lucas, and editor David Remnick. Then there are the fans, the Caro fans, who show up here as well to sing the praises of Caro's books. (Ethan Hawke beautifully reads the incantatory introductory paragraphs of The Power Broker, proving Caro's point that history needs to be well written. It's not enough to give the facts. You have to find the rhythm to present the facts). All of these people add texture and eccentricity, humor, nuance, and depth. Caro writes serious books about how power is used in this country, the source of it, and what it can do, including corruption. There is a sense of urgency, maybe even anxiety, about Caro not finishing the book "in time," as morbid as that sounds.

But it can't be rushed. Caro won't be rushed. Both men are wonderful interview subjects. They aren't "academic." Caro was an investigative reporter. Gottlieb said his only goal in life was to be "a reader." They're passionate about what they do, and they've devoted their lives to it. Would someone give these octogenarians a pencil, for God's sake, so they can get back to work? 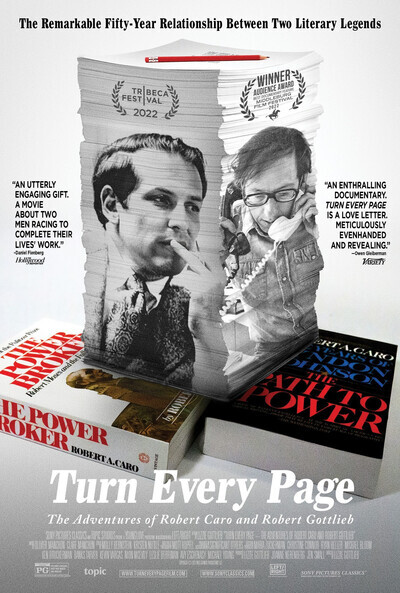 Robert A. Caro as Self

Robert Gottlieb as Self

Ethan Hawke as Self

Conan O'Brien as Self

David Remnick as Self

Bill Clinton as Self

Majora Carter as Self